Tribal forces allied with the Syrian Arab Army (SAA) started advancing in the southern Raqqa countryside. Acording to pro-government sources, tribal forces have captured the villages of Shuweyhan and Bir Al Dahel in the area.

On Thursday, additional reinforcements, including 2500 fighters, have joined a 4000 other members of Raqqa tribes who are currently fighting alongside the SAA in the province.

If this is confirmed, the SAA has succeeded in forming a large force from the sons of Raqqa, which is currently working to liberate the southern part of the province from ISIS.

The presence of this force may prevent the US from active actions against the SAA. The US has been claiming that the Shiite militias are the ones advancing in the area. The presence of this large force from Raqqa tribes may also force the US-led coalition and the Syrian Democratic Forces (SDF) to give up some of their decisions regarding the future of the province.

The SAA is advancing very slowly in the northern Hama countryside, despite the presence of large and well equipped forces such as the Liwa al-Quds and Soqour al-Sahra. The SAA and its allies seem to have problems of coordination in the area.

This is part of the Tiger Forces strategy, allying with any pro-government groups and tribes to help in offences.

It’s pretty effective, as the Tiger Forces have never suffered a defeat.

The SAA and its allies seem to have problems of coordination in the area.

When there is no planning before military operation then there will be no coordination. Every single soldier should have to know that what they are going to do today and tomorrow.

Agreed. They better hurry up! Don’t waste this opportunity.

SAA don’t need to hurry up. Slow and steady wins the race.

There is some reports about friendly fire from RAAF in east Salamiyah CS… Also some contradictory info that someone from the TOP wanted to stop this operations in east Salamiyah..And another strange thing: where those “tribal forces” has been before???!!! Lot of strange news, maybe someone could explain??

I suggested earlier that those “sudden” volonteers are not there to defend their country as suggested by others. Those are not patriots that come forward after 6 years of civil war and at the moment IS seems to be collapsing.

They are vultures that hope to profit from a status as “IS opponents” after the war. In reality they are a kind of war profiteers.

Not sure of the red area in the north, unless SDF has deiced to cede much territory to the SAA (maybe somebody went a little over board with their red marker)
But then again if any Sunni groups want to switch sides because they are unhappy with SDF and US coalition treatment of their homeland, THIS WOULD BE GREAT !
Bir Hiwaran at lower right is shown to be taken on another map, but not the whole road.
ARE THE TIGERS WAKING UP FROM THEIR NAP !
GO TIGERS GO

Yeah jihadi-map shows a slightly different configuration and shows SDF still just in their positions just above Resafa from where they tried to do the snatch and grab at the time of the SU-22 getting shot down.
They are of course notoriously slow to show SAA gains though. 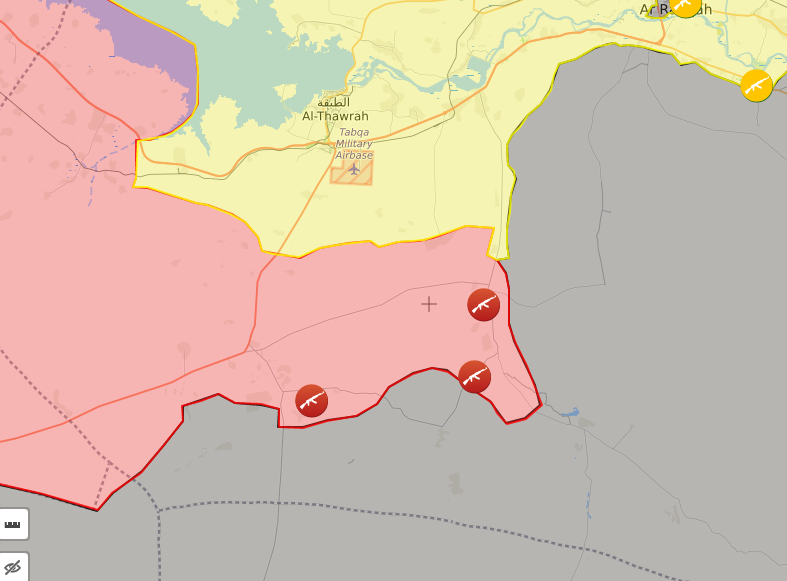 The SAA got the oil/gas resources so that little piece of land doesn’t matter. It’s not like they are going to run down the river next to the SDF anyway. Going South East seems more likely.

“The SAA got the oil/gas resources …”

no, they are in east-syria

“..- so that little piece of land doesn’t matter”

wrong. who control euphrates, he is the lord of syria.

Isis controlled it for a long time but were never the lord of Syria.

Fantastic strategic move to use local desert forces and immerse the Tigers in a sea of them, I can now see why the Tigers have only now got back, would have allowed the Govt to round up all their hillbilly’s and get them organized and pointing in the right direction while the Tigers took a well earned break.
Also with a good bulk of locals on the team we could possibly see advances in several directions at once and with forces available to garrison the taken areas the advances may well be a lot quicker than we are used to seeing.
Awesome stuff.

Possibly moving from Hasakha to Raqqa,. depends on if the perspective of the satellite is looking down from the north or south.

You would expect that wherever they were heading to that they would already have reached it. :)