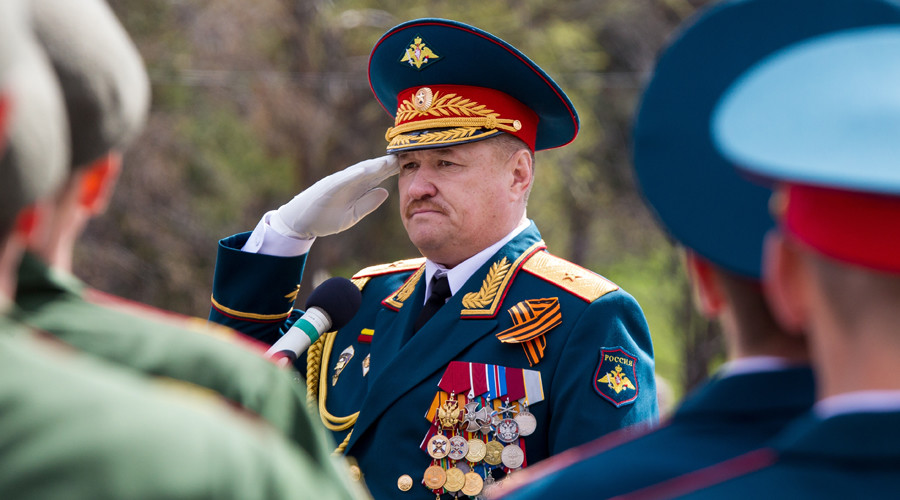 Deputy head of the Defense Committee in the upper house of Russia’s parliament, Frants Klintsevich, told the Russian state-run media outlet RIA on Tuesday that the death of Lieutenant General Valery Asapov in Syria became possible because of a treachery.

“There is precise data that it was a treachery… [We] are searching for traitors and they will be found soon,” RIA quoted Klintsevich as saying.

Earlier this week, Lieutenant General Asapov died in Syria as a result of ISIS shelling near Deir Ezzor city. The general was at a command outpost assisting Syran commanders in the liberation of Deir Ezzor when the incident took place.

RIA also quoted a Syrian security source that allegedly confirmed that information from the investigation file confirms the version about the treachery.

Interesting choice of words indeed. I hope they get to the bottom of it.

I don’t see why it couldn’t have been a member of ISIS, possibly blending in with the civilian population. All it takes is a cell phone.

Treachery… a very crypting verdict… by what side ? I just can’t imagine it would be Russia or Syria… But, the Aerospace Commander in Chief has just been dismissed from service !!! ( no explanation)… hope we will get to know who committed treason…

can be any..American money possibly involved

The US they had tracked US SOF in the vicinity under less than half a klick, can’t be certain if they were a relay team.

The US has hand held GPS devices to mark targets. They have passed them out to some of their supported rebels. If one of those devices was in the possession of someone on the ground over across the river in the SAA beach head where the General was killed, it could have given ISIS or SDF the precise location of the General in real time.

Lots of countries have such devices. Spain, Brazil, China and India could all have done the same. Conspiracy Theory without evidence is just that.

Not true. All other countries can use civilian GPS to determine location. But, with this device, which is the size of a cell phone, you point a laser at the target for just a moment, which could be a half mile away. The exact location of the target goes up to the US military GPS satellite system, which is totally separate from consumer GPS system..

OK … I should have been more specific. The location signal goes back up to a separate military satellite system or even an aircraft. It is then passed back to a control center and given to whoever needs it.

AND … yes the device does exist. It was in the news about 2 years ago, with pictures, and details and training for the moderate rebels to use it.

AND …. you are totally wrong about separate military and civilian GPS systems. They are in fact separate systems . It could be the same satellites, but the military part of the system is much faster and accurate, and most importantly – IT REQUIRES A KEY to use it.

If it was the same system as the civilian system any country could use it for their on military weapons. Can you imagine Russia using our GPS satellites for their cruise missiles? Of course not. They don’t have the key.

For example, a couple of years ago Israel wanted to use their US supplied JDAM GPS bombs to take out the Iranian nuclear production sites. President Obama refused to give them the key, and thus saved the US from another war to make the region safe for Israel.

It’s even better: TR@MPer banned the citizens of the Islamic State of Venezuela.. (SIC!) of entering the USA.. At the same time he sells for over 150 Billions US dollars WEAPONS to the profound democratic, Human-Rights-loving and peaceful … SAUDI-ARABIA (sic!) and that camel-dvng may come and go in the USA.

Such a f*king hypocritical pYg.

Except the ex American CIA leader lined their doctrine on public TV. Kill Russians wherever possible, and however possible. So we know they have contacts in Isis (“spies as their leaders”) and US SOF operate amongst them… doesn’t take a child to connect the dots.

also the fsb leader putin can tell this.

… on TWITTER, right? The US-turkey TR@MP does such things, that Kremlin-snake Vladi keeps low-profile and bites. But now he’s very busy with STRINGENT STATE-urgent issues: like what that f*king doped, asocial NFL-apes are doing by their games.

Till yesterday Trump was worrie that N-Korea nukes him… and now he forgot the fat-KIM, has this important issue to resolve => if the NFL-players may scratch their asses or not. I presume that omorrow the main problem will be if the US-flag is racist because it hasn’t some BLACK STRIPES..

Comes down to “What do you think, What do you know, and What can you prove”!

That applies to courtroom – not necessarily a response in an open conflict zone!

Well, the TV interview is a fact and with high certainty ISIS is controlled by the CIA and/or Pentagon. After all, they had “spies as their commanders” in so high numbers. There are many things in the world that can never be proved with 100% certainty, that’s why there’s this thing called logical conclusions.

You and I can’t prove it with 100% certainty. Putin, Trump, CIA and Pentagon all have this info and know the rules of the game, and know the others know it as well.

ISIS has been supported by CIA and CIA cutouts. That is obvious. To say that CIA controls ISIS is incorrect. I may take a dog and beat it until it is vicious, then loose it onto the streets. That vicious dog is as likely to rip my throat out as anyone else’s though.

That’s courtroom justice , there is no courtroom in a military theater and they will probably be killed no questions asked right all the way back to who gave the order and that will be an accident.

I’m not saying that Rambo Dave’s scenario is false. I’m certainly not saying that treachery is outside CIA’s list of standard operating procedures. I’m just saying that the existence of certain technologies does not prove they were used. Otherwise when a pedestrian is killed by a hit and run driver, the fact that you and I own automobiles {proves} that we are the culprits.

So far in rereading Rambo Dave’s comments, all I see is him saying CIA has the technology, therefore they are the culprits. As I told him in my first reply, CIA is not the sole possessor of such technologies. Furthermore, the General was in an exposed front line position. Bad things happen to people in such places, and there is no proof that the General was deliberately targeted, as opposed to just firing toward the enemy held positions.

Not that there’s anything wrong with that! :D

This wouldn’t be the US but IDF specfor, they only know how to be terrorists and are not really good as counter terrorists.

F*king stvpid Usraeli useful id*ots. USA have SATELLITES, don’t need laser-pointing things. Enough that the USA told ISIS where to shoot and if a dozen canons shoot in the same place, it’s enough to finish the people there. WTF are you complicating all the story? This can be a WW2-level operation, that’s enough to get the results.

They also have small GPS locaters that can be hidden in armored vests. All the infiltrator has to do is go up to the General and shake hands and walk away. Here is an excerpt from a CNN article in August 2015.: >>>>>>>>>>>>> “Abu Iskander says much of his work involves providing targeting for U.S. airstrikes, explaining how his American contacts are able to keep track of his movements using GPS devices on his wrist and in his armored vest.” I go to the front line against ISIS, and I give locations for the warplanes to bomb,” he said. “We have developed communication devices using satellites that can target from any place on the front line whether we see it or not. “

The coordinates need to be sent, and even if encrypted will leave a footprint. The combination of a burst of encrypted data, the general’s unknown location, the time, and the timing of the following mortar strike would prove treachery beyond reasonable doubt. Catching the perp should not be too hard!

I’d guess that after crippling losses for the US/al-Qaeda in Idlib, Muricans would shift their efforts and focus on hurting the Russians as much as possible, you can be expecting an upcoming shipment of Murican “aid” to Ukrainistan.

It is the risk of anyone on or near (see picture by SF) the frontlines.

Too early to know. But high value targets are not neutralised by pure luck. There is US and/or other Western SOF involvment 100%.

Somebody from those people around him called ISSIS/USA and then just disappeared. ahahahaha, he trusted Arabs, he must be so naïve that general. he trust people who stone own women.

russian senator :DDD he is expert.

but typical russian style: never admit, that they made a mistake. immediately accuse somebody alse. if not possible, the solar flares. :DD

This reminds me that a month or so ago when Tigers reached Euphrates in Raqqa, I felt that fighting Daesh next to sdf was very unhealthy environment because of intense Cia/Mossad surveillance from sdf side and the probability of coordinates being passed on. Well, here we go again! It is a bad environment. But it still required a mole, likely very close to the Russian general to pull it off. Mossad is most likely to get a man so close.