The agreements reached in the briefing held in Vienna aim to achieve an eventual ceasefire and political settlement in the Islamic nation. 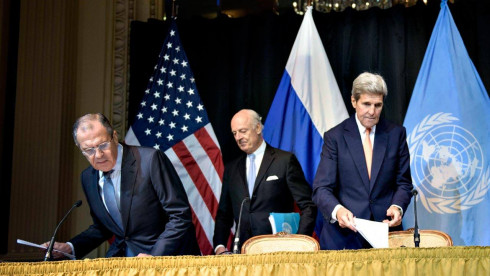 Sergei Lavrov, Steffan de Mistura and John Kerry, before the Press Conference after talks on Syrian conflict in Vienna

On Friday the 30th the first round of talks over Syrian conflict finished in Vienna with a series of agreements that include the implementation of a nationwide ceasefire and also the enhancement of a political settlement in the country by means of general elections and the creation of a new constitution.

Some of the partakers of the meeting didn’t fully agree with the participation of Iran in the talks due to its support to Assad’s government.

However, there’s not an accurate date for the implementation of the measures agreed in the briefing, but they could likely take place in about six months.

One of the most important agreements about the transitional process in Syria is that Assad wouldn’t have to immediately resign to the power; he would be able to remain in charge for six months since the beginning of the changeover.

Both Russia and Iran agree that Syrians must decide whether or not Assad remains in the power, not the coalition, alleging that if elections get to happen, even refugees should take part in the process.  Assad was legitimately elected President on 2014.

The next round of negotiations over Syrian conflict is scheduled to take place next week.

720 Fighters Killed, Attack On Zmeiny Island Thwarted And Other Failures Of Ukrainian Forces Over Past Day – Russian MoD