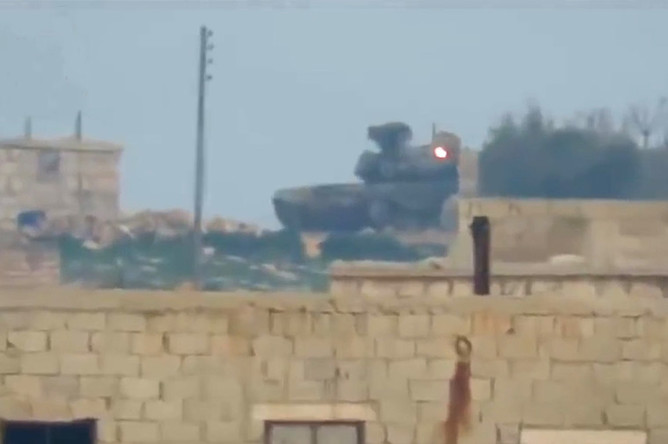 Original by Viktor Murakhovskiy published by gazeta.ru; translation by J.Hawk

Syria has seen many types of anti-tank guided missiles (ATGMs) and light anti-tank weapons being used on its territory. There are Soviet-era Fagot/Faktoriya and Konkurs missiles, the more modern Kornet which is used by the SAA, US-made TOW-2A which was and probably is being delivered to the so-called “moderate opposition” by the US, and also by Turkey and Qatar to Islamist groups.

The US TOW-2A have undoubtedly become one of the most dangerous weapons used against Syrian tanks.

The TOWs used in Syria are from various manufacturing batches. Some from the ’90s, some with very recent 2012-2013 markings. Nearly all of them are the modern TOW-2A variants of which several tens of thousands were manufactured in the US and exported to many countries.

All are wire-guided, except the radio-command Aero-RF version which was not used in Syria. Militants tend to film their TOW use in order to receive bounties for destroying Syrian equipment.

Depending on the level of deviation from the sight line, the coordinator generates corrections which are transmitted through the wire. The wire reel is located in the missile itself. Many missiles use a similar principle, including Soviet-era ones. There is no need to illuminate the target or measure distance. TOW-2A maximum range is 3750m, which it covers at a subsonic speed of 250-260 meters/s.

It carries a tandem shaped-charge warhead. The nose spike contains a small charge which is supposed to detonate reactive armor protective elements. The main charge is 152mm in diameter and weighs about 6kg, which allows a penetration of 850-900mm of homogeneous steel armor behind reactive protection.

A TOW-2A was used to destroy the damaged Mi-8 during the Su-24 pilot rescue operation. The missile can be used against many types of targets, including low-flying helicopters.

Contemporary ATGMs, including Russian ones, have automatic target trackers which allow the operator to not have to worry about tracking the target manually. Russian T-72B3 tanks, which can launch guided missiles, have such trackers.

The target tank’s destruction is practically guaranteed if it is hit by a missile like that in the side or rear. No tank has sufficient all-round protection to withstand such hits.

What do we see on the video? We see a T-90 model 1992 with a cast turret. This much is obvious from the presence of Shtora and the shape of the gunner’s hatch. Model 2004 tanks have a welded turret with a higher level of protection.

The tank is protected by Kontakt-5 reactive armor, and its forward aspects are protected by layered armor. We can see that the missile hit the left front turret face, triggering Kontakt-5, but apparently failed to penetrate the main armor.

The tank’s crew neglected its battlefield duties: the hatches were open, Shtora was not switched on. It suggests the crew was not very well trained. We have information suggesting Syrian crews are not trained in Russia but on the spot. There are Russian tankers in Syria but they work as instructors at the Ithriyah base.

The explosion of a 6kg warhead naturally caused considerable blast over-presssure which penetrated into the open hatch, which prompted the stunned gunner to jump out of the tank. If the hatch were closed, he’d not have suffered from the over-pressure. The tank’s frontal protection is several times greater than side protection. Soviet and Russian tanks are designed to withstand hits by most munitions from the frontal aspect, in other words, within the forward 60 degree arc.

The tank’s crew was poorly trained, and the way the tank was being used leaves a lot to be desired. Tanks ought to be part of combined arms teams and operate with close infantry support. As one can see, the crew did not detect the missile’s launch. If at least three tanks, or a platoon, were operating together with mutually interlocking fields of vision and fire, and if infantry were scouting ahead of the tanks, the missile crew would have been destroyed immediately after launch. The tank also makes no attempt to maneuver, and a single, isolated tank that’s sitting still is an ideal target.

The video was filmed in Sheikh-Akil north-west of Aleppo where the Zaviya Mountain Falcons is operating as part of the Free Syrian Army 5th Corps. It was a reconnaissance in force by Khazara and Afghan Shia fighters. They tried to capture Sheikh-Akil but were repulsed. Later videos from the same town do not show a T-90 wreck, though there are videos showing the withdrawal of troops and equipment. It means that the tank either left the battlefield on its own or was evacuated.

I think that the tank remained mobile and the crew survived, although it’s possible some of its sighting devices were damaged.

Shtora-1 is standard equipment on a T-90. The two turret-mounted projectors emit modulated radiation in the optical and infra-red parts of the spectrum. The system suppresses optronic ATGM coordinators out to a distance of 2-2.5km. ATGM tracking systems receive false signals from the Shtora emitters so the missiles receive improper course corrections leading to them flying off to the side or crashing.

Shtora has a probability of success of about 80-90% against an ATGM. It is very effective against older Milan, HOT, TOW, Fagot, Konkurs, and others. But the TOW-2A has not only a xenon lamp but also an infra-red emitter which emits a coded signal, making the Shtora less effective against the missile. Which is why Shtora is not part of more recent Russian designs, for example the modernized T-90SM or the T-72B3.
Modern missile launch detection system which operate in the UV spectrum can be installed on UAVs and ground vehicles, but so far they are experimental. Such systems detect the rocket motor plume. They can issue launch warnings, allowing the crew to aim the tank’s weapons against the source of the launch and to eject an aerosol screen which conceals the tank from optical and IR detection systems.
The most modern Armata vehicles are equipped with active defenses which shoot down the oncomign missile at the distance of 3-5m.
While Syria fighting has seen model 1992 T-90s, there’s also the model 2004 T-90A. But T-72s are more vulnerable against ATGMs with tandem warheads.  They can be modernized using Uralvagon-developed applique kits which increases their survivability.

One should add that SAA tanks and other armored vehicles are sometimes equipped with “dazzlers”, or domestically developed systems with function in a way similar to the Shtora, except that they provide all-round field of protection. Since Syrians now have TOW-2A in their possession, they can develop jammers capable of operating against these missiles. As long as one knows the frequencies and spectrum ranges which the ATGM tracker senses.

Using T-90s or Su-35s will not bring about a breakthrough in the fighting, however, if tanks are used with skill, in close cooperation with other arms and in a concentrated, mass fashion, the effectiveness of their operations will increase.

Tags:military, russia, syria, the us, war

I would be tempted to locate the warehouses holding the TOWs as they are being delivered in Jordan, Turkey, Saudi Arabia etc and blow them up there… then do as Israel does – neither confirm or deny you did it, just reiterate the canned response – we reserve the right to protect our selves – full stop.

Rick, are you saying that as an American? The stated objective of the Obama administration is to oust Assad. To that end, the Obama administration openly arms and trains rebel FSA fighters many of whom are known to be linked to al-Qaeda or have defected to ISIS taking their weapons with them. Wouldn’t it be better to stop sending the weapons in the first place and ask our allies to do the same.

Yet they don’t, hmmm i wonder why? Could it be your dreaming, yeah you living a fantasy. Russia can’t even fly against its own old soviet air defenses in Georgia mush less against a real air force. The Georgians with there own soviet kit shot them to shit so pretty sure the US would wreck them.

Excuse me but there is some missings in this article, for example the missile wasn t a TOW-2A, It probably was a TOW 2B you can see it in this article https://misterxanlisis.wordpress.com/2016/02/28/misil-tow-y-t-90-vs-tow-en-siria/

If it was TOW 2 B, it certainly was not used in top attack mode like it should have. That would actually explain why it didn’t destroy the tank.

There are lot of videos of TOW and Konkurs used in Syria as anti personnel weapons striking strong-point houses or dugouts. From distance of recording camera we see big plume of smoke and looks damaging – but if these missiles primarily have shaped charge warheads with plasma jet to pierce armour with explosive charge, then isn’t that designed as very localised detonation? Meaning, the delivered blast radius is meant to be small as concentrated to go inside a hull/turret, so is firing an ATGM at a dugout or trench very effective, is it survivable, as it would only effect a quite small area?

Tanks can’t be effectively deployed all the time. They were able to ambush this tank in a rather leisurely way. I have to wonder if relikt is being used on these, helping surviving a shot from a tandem warhead weapon.

Classic racist russian excuse for there shity armor “its not the tank its the oporator.” Bullshit you can only blame battle hardened Arabs troops for shitty russian equipment failures so many times before it becomes clear the shit is worthless like shatora.

Except in the real world that never happed, you made that up. What really happened was the t80 got its shit pushed by chechen dirt farmers with obsolete soviet AT weapons which is why it was withdrawn totally infavor of this older less capable chassis in russian servics.

Well done article describing both sides of the discussion. I’m sure there’s many other Veterans on here like myself who were 11Hotels (Heavy Anti-armor Weapons Infantryman) and later on all 11H’s were folded into 11B since the Bradley’s used the TOW and we didn’t have to be concerned about hordes of Russian tanks. 11 Hotels know how deadly the TOW can be if deployed properly. I was impressed how the rebels or whatever they’re called managed to actually kill tanks since rough handling the missile and the launcher components will easily cause a failure. The easiest way to disable a TOW system is by damaging the umbilical cable connection to the MGS (Missile Guidance Set) because the numerous small pins easily misalign and get dirt inside causing damage while emplacing the launcher. Then there’s the temperature variance, the missile should be kept somewhat cool in desert climates where the heat can go up to 150 degrees which can damage internal components over time. I wish I knew how many TOW systems went down and how many missiles failed to launch (misfired). I noticed none of the launchers were equipped with the AN/TAS4C thermal sight and just used the daylight tracker. Dazzlers are a good countermeasure IF the enemy knows the frequencies the missile beacons use. The MGS only tracks the beacon that is pulsing (frequency) at a frequency it sets and ignores all others. The TOW2 can punch through very thick armor that most people don’t believe is possible so if it hits a target, it’s turned into scrap metal!