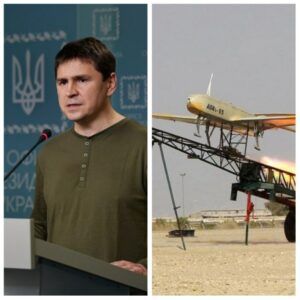 Written by Alexander Rubinstein. Originally published by the GrayZone

Mykhailo Podolyak, an advisor to Ukrainian President Volodymyr Zelensky, has called for attacks inside Iran as the country’s drones cause setbacks for the Ukrainian military.

Kiev adopted its hostile posture towards Tehran after claiming Russia deployed Iranian-supplied drones to strike Ukrainian civilian infrastructure throughout much of October.

In an interview with a Ukrainian news outlet on November 5, Podolyak argued that the response to Iran supplying Russia with drones should not be limited to sanctions or even a total trade embargo: “It seems to me that it should not be sanctions or even an embargo, yes a total embargo. It seems to me that it would be possible to carry out specific strikes on the production of drones, ballistic missiles, and so on.”

Iran’s government has responded to the allegations by Ukraine and its Western patrons by acknowledging that it supplied Russia’s military with drones prior to its military campaign in Ukraine. According to Tehran, Iran was willing to review evidence that its weapons were used to attack Ukrainian infrastructure targets. Russia, for its part, has officially denied using Iranian drones to attack Ukraine.

“We agreed with the foreign minister of Ukraine to provide us with any documents they have that Russia used Iranian drones in Ukraine,” Iranian Foreign Minister Hossein Amirabdollahian informed reporters gathered in Tehran earlier this November. But Amirabdhollahian said US and European interests ultimately pressured Ukrainian officials to reject direct engagement.

With dialogue blocked between the two countries over the contentious topic, Kiev is now resorting to threats against Iran.

Russia’s military carried out attacks against Ukraine’s electrical grid in response to the October 8 Ukrainian truck bombing of the Kerch Bridge that links southern Russia to the territory of Crimea. According to Zelensky, Russian strikes have wiped out as much as 40 percent of Ukraine’s energy system.

The presence of Iranian drones appears to be causing serious headaches for the Ukrainian military, as both Zelensky and his top advisor Mykhailo Podolyak have lashed out at Iran in recent statements.

Podolyak not only called for airstrikes on Iranian military sites, he regurgitated well-worn Western and Israeli regime change talking points about Iran being a destabilizing force, arguing that without strikes on targets in Iran, the country will continue to arm “terrorist groups like Hezbollah” and the “terrorist Russian Federation.”

Podolyak has been ranked the third most influential Ukrainian by the Kiev-based Focus Magazine.

“Of course, increasing pressure on the Iranian regime was discussed today with Mrs. Ursula von der Leyen. Its complicity in Russian terror must be punished,” Zelensky proclaimed in a speech published on his website. “And we will bring this issue not only to the level of our traditional partners. The whole world will know that the Iranian regime helps Russia prolong this war, and therefore prolong the effect of those threats to the world provoked precisely by the Russian war. If it was not for the Iranian supply of weapons to the aggressor, we would be closer to peace now.”

“Absolutely everyone who helps Russia prolong this war must bear responsibility for the consequences of this war along with it,” Zelensky said, adding that “we understand” that Russia is preparing for more “mass attacks on our infrastructure” with “Iranian missiles.”

Though there is no record of any Iranian missile being used in an attack on Ukrainian infrastructure thus far, Zelensky declared, “We are preparing to respond.”

Just as Iranian-made drones appear to have given Russian forces a major boost on the battlefield, the US HIMARS artillery system has enabled significant Iranian gains, including the recapture of Kherson. However, no high ranking officials in Russian president Vladimir Putin’s office have similarly threatened the United States, or any of the other 40 countries that provided Ukraine with critical military assistance.

This October 13, Podolyak fulminated against Israel for having not supplied Ukraine with advanced air defense systems, tweeting, “shouldn’t countries for whom Iran is an existential threat send their Air Defense to Ukraine?”

As The Grayzone reported this September, Zelensky has fantasized about transforming his country into a hyper-militarized “big Israel.” To that end, he and his top advisor have already begun threatening to expand their war to the frontiers of Iran.

Really I do not understand, how or how dare, ask or prohibit a country, to sell weapons to another country, the case of Ukraine is unique of its kind, therefore Ukraine has the right to buy and to take where she wants and when she wants and without hiding it, but on the other hand she laments that the opposing party is taking care of itself elsewhere. I find that a bit weird

Let’s be wise, Ukraine takes and buys weapons from everywhere, old and new, obsolete and modern, why Russia has no right to take too

iran should pay for the destruction of Ukraine & Kherson as well as Syria & Afghanistan, and Iraq.

Sometimes the Simplest Answer Is The Best Solution

Scientists collected Knowledge, einstein stole from it and gave it to jews to nuke japan, for no reason, like unwalled villages, unwalled, all of them.

Strategic retreat™ as a gesture of goodwill!

Strategic retreat™ as a gesture of goodwill!

EMOJIS ARE FOR LITTLE P00FS
Reply to  Strategic retreat™ as a gesture of goodwill!

You have a severe attention seeking deficit disorder,this is what happens to weak gayee punks like you!

“And we will bring this issue not only to the level of our traditional partners. The whole world will know that the Iranian regime helps Russia prolong this war, and therefore prolong the effect of those threats to the world provoked precisely by the Russian war. If it was not for the Iranian supply of weapons to the aggressor, we would be closer to peace now.”

So the problem is caused by Iran, that helps Russia with ehmm… about 1% of weapons used, not by NATO that helps Ukraine with ehmmm, the 80% weapons they actually have.

Souithfront you have some cleaning to do among the comments.

Ukraine now run by Zionist Zelensky . and Ukro government has become hypocrite . they dont see they take high tech eopeon from nato . But fake news of iran supply of drone casuing them headeche. we dare Ukraine to attack Iran . and you will see how Zionist ukro nazi government will be annilihated.Zelsenky think few advance made by nazi troops they can talk big.

This idiot advises Zelensky? No wonder the poor fool is losing the war.

This shows how stupid Ukraine’s fascist nazi-regime really is! Srikes inside Iran with the help of satanist US Biden regime and what do they think will happen? 🤡💩 Iran will send 1 million soldiers to Ukraine to fight alongside Russians and Ukraine will be destroyed. Should we hope that Kiev gets what they want?

EMOJIS ARE FOR LITTLE P00FS

Another weffy jiew whom obviously fucks goats for breakfast,how else can you describe zoggy gimps?

Maybe if Iranian generals were sent to command the Russian Army, they wouldn’t be retreating like idiots all the time and abandoning their territory and people to NATO nazi terrorists.

Don’t forget many Russian generals were eliminated during the 1st phase of the SMO, being targetted on purpose with intelligence help from the USA. And the USA eliminated Iranians too. But Russia and Iran haven’t eliminated generals of the USA.

It think the balance of power (Anglo-American Empire + Israel VS Russia + Iran) is mismatched, and Russia and Iran know it too.

Proof positive that Ukraine is the US Proxy army as if there was ever any doubt. Must be running low on business in Ukraine, have to busy themselves elsewhere.

If you declare severe sanctions on Iran you have already used your best weapon. If you try to attack Iran (a pipedream) you will be inviting a bigger, wider war. If that’s the best advice that Zelenskyy can get he’s already lost.

There must be something in the Ukie drinking water to make such asinine threats.

The Ukies are behaving like a US Miny ME, LOL.

Well Ze is a jew and jews hate iran and russia so whats new with that?

Used to be they just hated Nazis, but I guess they must’ve kissed and made up and I missed it.

I suck zionist dick for a living. Ever since my wife left my ugly pink ass for a strong black man I have been dildoing myself repeatedly and inviting my ass to be used for precision zionist penetration. I understand how Zelensky feels, we both take cock for an extra few shekels 😘

What a hypocritical double standard.

So it is ok for all of Europe to supply billions of dollars of military hardware and ammo, as well as battlefield intel and volunteering fools to Ukraine, but not ok for Russia to buy drones from Iran.

In the unforgettable twit twaddle of Pentagon frontman Elon Musk: “We’ll special op anyone we want and when we want. Deal with it”

And NATO is the “good guys”