According to head of the joint command of the coalition forces in Iraq, Lt. Gen. Stephen Townsend, the defeat of the Islamic State (IS) terrorist group, including the capture of the cities of Mosul and Raqqa, will take two years. 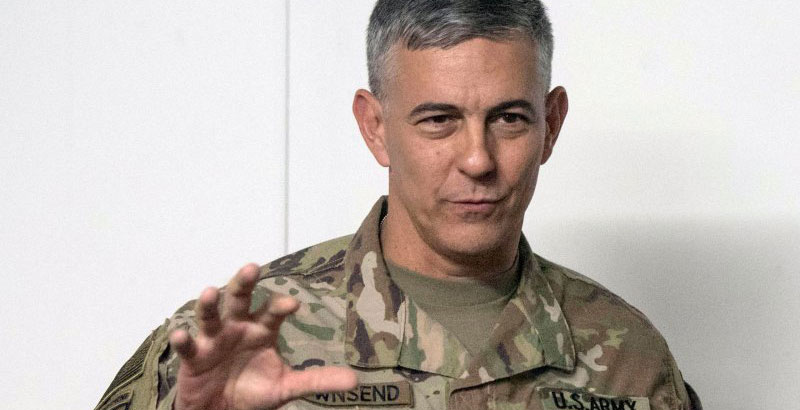 The defeat of the Islamic State (IS) terrorist group, including the capture of the cities of Mosul and Raqqa, as well as clearing the remnants from other, less important areas, will take two years, head of the joint command of the coalition forces in Iraq, Lt. Gen. Stephen Townsend, told The Daily Beast on Sunday.

Townsend noted that the enemy is dangerous and cruel – very often terrorists use children as a human shield in order to prevent airstrikes of the coalition.

“A fighter walking out of a building will hold a child over his head so we can see him through ISR [intelligence, surveillance, and reconnaissance] until he reaches another building,” the Lt. Gen. said.

The US is wary of the legalizing the Shiite militia in Iraq, which is accused of committing war crimes against Sunnis. However, Townsend stressed that these militias have been “remarkably disciplined” allies since he arrived. In this way, the US commander allowed to understand that Washington is not going to try to change this situation, as the Shiite militia is controlled by Iran, and the US does not want to mar relations with Teheran, taking into account the active work of Maj. Gen. Qasem Soleimani in Iraq, who has great connections in the Iraqi government.

Townsend stressed that “a key challenge” of the US forces in Iraq is to “assist without causing insult,” noting that “sometimes, that means getting stuck between being honest with the US media, while Iraqi generals are being less than forthcoming in a country where openly admitting mistakes or difficulties is not the done thing.”

According to the commander, the US forces are shocked by mass executions and killings on the territory, controlled by the terrorist group.

“Beheading with a knife isn’t good enough anymore,” he said of IS fighters.

According to Townsend, terrorists actively use “blow torches, chainsaws, and even bulldozers to crush rows of people.” He also pointed out that the air force of the coalition “tries to stop such macabre displays by striking targets nearby, but that seldom helps.”

As the commander noted, the storm of Mosul is virtually suspended, as “casualties in some units” are “as high as 30 percent.”

“People need to rest. They need to assess how things are going because they are not going as fast as we thought,” he said.

Townsend added that the Iraqi forces are currently “moving in fresh reinforcements, ammunition, and taking time to repair vehicles broken in the headlong onslaught into western Mosul.”

According to the Lieutenant General, Americans have offered to Iraqi generals to suspend the assault in order to straighten out the advancing units up, but the Iraqi side insisted on continuation of the assault with the former group that has led to pointless attempts to break through the defense of the IS in the eastern neighborhoods of Mosul, while two Iraqi divisions bogged down to south of the city and could not help the storm.

As the commander noted, “Iraqi army is learning to send its tanks into battle into the city.” He also added that the US forces did not train Iraqi soldiers to do that and “they are learning to do it in combat.”

Townsend said that one of “the largest threat the Iraqi forces face comes from armored car bombs.” He also added that “now the Iraqi ground forces are learning to clear houses alongside tank units, with the tank units protecting their progress from armored car bombs, or blasting holes in the side of houses so ground forces can pour in to clear them without going through booby trapped doors.”

The Lieutenant General had praise for the “rapid progress of the so-called Popular Mobilization Forces [PMF] – mostly Shiite militias, who stormed up to the outskirts of ISIS stronghold Tel Afar, west of Mosul, keeping off fighters from traveling back and forth with supplies or information.”

“The PMF did advance more rapidly than we expected and they’ve done a good job,” he said.

In general, the US has already resigned to the fact that the blitzkrieg did not take place in Mosul, and the war in Iraq will continue for a long time. Nobody remembers about an optimistic forecast of the Pentagon, according to which Mosul and Raqqa should be taken in 2016. Washington even prefer not to call a specific time frame – an assault of Raqqa can begin in the spring of 2017, while the storm of Mosul obviously will be delayed for several months.

He talks about macabre mass executions and bombing nearby to try and stop it from happening, surely it would be better for all, including the victims of the executions if they just bombed the whole site were it was happening .

The Iraqis will take Mosul when they stop listening to the Americans. 1. Use the dreaded ‘Shiite militias’ who were actually trained how to fight by Iran which is a lot different than being ‘controlled by Iran’. These are people who were born in Iraq.

2. Use tactics to pressure ISIS more efficiently on multiple fronts as was done by the Russian assisted forces at Aleppo.

The civilian carnage will be (probably already are) much higher than Aleppo but it will be hushed up of course.

I think militias (not regulars) sealed the western approaches (ESCAPE ROUTE) to (from) Mosul. That was very naughty as it prevented the planned escape.

Isus had plenty of time to move forces, and many showed up to take Palmyra. US and Saudis announced their intention to let Daesh leave Mosul! This was maybe 3 weeks before shiat militias cut off route at Tel Afar. It was all timed and planed.

Maybe they should take a few lessons from the Russians?

The SAA, and Russia will clear Raqqa in six months which is about the time that America will declare victory, and go home. Once the Americans are out of the way Iran, and Iraq will clear Mosul, and the rest of Iraq. The only factor dragging out the war in Iraq is the good old USA. After all, if the US leaves who’s going to protect ISIS.

“Once the Americans are out of the way” , the US General Townsend , just said two more years . The Americans entered Iraq in 2003 , and are still there , they do not want to leave . They are simultaneously attacking Mosul in Iraq , and Raqqa in Syria , both ISIS “capitols” . Well we know ISIS is their proxy army , they will do their best not to hurt them at all . So , this is the time to clear the rest of Syria , Damascus , Darra , Days Azzor , Palmyra , and reclaim the oil fields , stop giving them ISIS , revenue , we need it , the army deserves a raise !

After 2 more years there is nothing left. Gosh, I hate America.

After all, if the US leaves who’s going to protect ISIS.

With all due respect Lt. General Townsend, you sir are full of shit. As I remember and others here have posted, it was all about ‘ we can show the Russians how to really do it’. ‘We can clean this all up before anybody can find the evidence’ type communication was issued with plenty of bravado and mustard. Now, sir, you have the cast iron balls to stand up there, straight faced and talk about ‘years’ for now. Go jump in a lake.