Donald Trump is on a mission.  His goal? Destroy the post-WWII institutional order that has outlived its usefulness.

And there have been a number of major moves that fundamentally tear at the fabric of that order.  In a span of a day we’ve had the following things occur in quick succession. 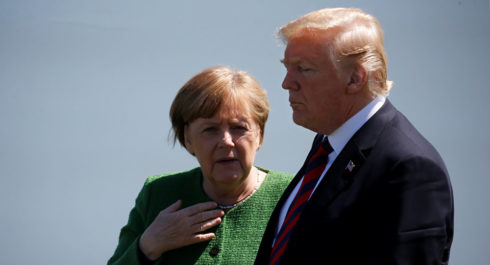 So in one week we’ve had the Germans threaten SWIFT, the French question the validity of NATO and Trump threaten to leave the WTO.

All against the backdrop of the end of the Syrian Civil War and the potential withdrawal of U.S. troops from there while the Taliban arrive in Moscow to discuss peace terms with the Afghan government.

Is it just me or are things about to look very different very soon.

If we take Trump at his word hen we were supposed to believe Trump wanted peace and free trade with the EU.  In this case his word was this tweet from July 24th where he said:

The European Union is coming to Washington tomorrow to negotiate a deal on Trade. I have an idea for them. Both the U.S. and the E.U. drop all Tariffs, Barriers and Subsidies! That would finally be called Free Market and Fair Trade! Hope they do it, we are ready – but they won’t!

Oops, Donald.  They were.  And as I said above, his big bluff on this was called.  Trump doesn’t want free trade with Germany.  He rejected the offer to scrap all automobile tariffs because “their consumer culture doesn’t buy our cars.”

Yes, because our cars suck, frankly.  And they’ve sucked for a long time.   And you can’t mandate they buy them.

This sequence of events highlights exactly what I said about Trump last week, that he is purposefully driving a wedge between Europe and the U.S. to end NATO, among other things.

Merkel, for her part, has been so terminally weakened by her immigration policy and strong-armed approach to dissent that this whirlwind weekender by Putin was as much for her benefit, politically, as his.

The implication being that if Merkel wants to stay in power with her weakening coalition and poll numbers it’s time for her to reverse course. And if that means cozying up to Russia then so be it.

Merkel will continue to talk a good game about Crimea and Ukraine while Putin will speak directly to the German people about ending the humanitarian crisis in Syria as a proxy for ending the threat of further immigration.

He knows most of the people who are behind the opposition to his Presidency are the same people driving the globalist bus, those I call The Davos Crowd.

He knows that Merkel and Macron both work for them.  And The Davos Crowd are hell-bent on destroying the multiplicity of cultures that make Europe what it is.

So, Trump doesn’t want a solution to this trade spat.  He wants to inflict maximum pain on them to force a radical realignment while extricating the U.S. from subsidizing their march towards centralized tyranny from Brussels.

At the same time this gives Macron and Merkel all the breathing room they need to patch things up with Russia while the Brits fume over not being able to destroy both Trump and Putin, since MI6 and the British Deep State are the ones doing the dirty work to undermine Trump and Putin at every turn.

Macron’s statement about Crimea was the first made by a major European leader that didn’t explicitly mention the Minsk II agreement as a prerequisite for normalizing relations with Russia.

Trump has pushed the EU into a corner, essentially saying, if you want to choose Russia, China and Iran over us, you’ll do so without our money and our banks.

Trump has all the subtlety of a wolverine in rut, but he’s pretty clear about what his intentions are if you are listening.

Fx Trump has not pushed EU to a corner. he push all.So far he and USA has gained nothing.

World economics is not runned by some random president even its a big dirty one.

For whatever you think of Trump, you have to admit how delightful it is to see a US president go so far off script.

“…So, Trump doesn’t want a solution to this trade spat. He wants to inflict maximum pain on them to force a radical realignment while extricating the U.S. from subsidizing their march towards centralized tyranny from Brussels…”

Yeah! You can thank us later for our ‘help’, EU. That was the sound of the Davos globalists getting kicked in the nuts.

“…Trump has pushed the EU into a corner, essentially saying, if you want to choose Russia, China and Iran over us, you’ll do so without our money and our banks…”

Wait… that’s not a threat. And that was the sound of Israel-firsters and U.S. banking oligarchs getting kicked in the nuts. Trump shouldn’t piss them off. You know… Kennedy, etc.

I don’t see any advantages for the US Wallstreet or Mainstreet in this approach.

The EU/Germany will join Russia-China Inter-banking payment system and exit NATO and so become US independent and ultimately close US military bases in EU.