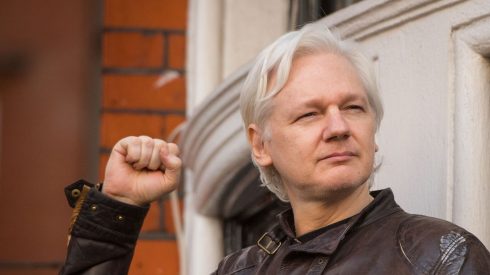 It was a dastardly formality.  On April 20, at a hearing at Westminster Magistrates Court, Julian Assange, beamed in via video link from Belmarsh Prison, his carceral home for three years, is to be extradited to the United States to face 18 charges, 17 based on the US Espionage Act of 1917.

The final arbiter will be the UK Secretary of the Home Office, the security hardened Priti Patel who is unlikely to buck the trend.  She has shown an all too unhealthy enthusiasm for an expansion of the Official Secrets Act which would target leakers, recipients of leaked material, and secondary publishers.  The proposals seek to purposely conflate investigatory journalism and espionage activities conducted by foreign states, while increasing prison penalties from two years to 14 years.

Chief Magistrate Senior District Judge Paul Goldspring was never going to rock the judicial boat.  He was “duty-bound” to send the case to the home secretary, though he did inform Assange that an appeal to the High Court could be made in the event of approved extradition prior to the issuing of the order.

It seemed a cruel turn for the books, given the ruling by District Court Judge Vanessa Baraitser on January 4, 2021 that Assange would be at serious risk of suicide given the risk posed by Special Administrative Measures and the possibility that he spend the rest of his life in the ADX Florence supermax facility.  Assange would be essentially killed off by a penal system renowned for its brutality.  Accordingly, it was found that extraditing him would be oppressive within the meaning of the US-UK Extradition Treaty.

The US Department of Justice, ever eager to get their man, appealed to the High Court of England and Wales.  They attacked the judge for her carelessness in not seeking reassurances about Assange’s welfare the prosecutors never asked for.  They sought to reassure the British judges that diplomatic assurances had been given.  Assange would be spared the legal asphyxiations caused by SAMs, or the dystopia of the supermax facility.  Besides, his time in US detention would be medically catered for, thereby minimising the suicide risk.  There would be no reason for him to take his own life, given the more pleasant surroundings and guarantees for his welfare.

A fatuous additional assurance was also thrown in: the Australian national would have the chance to apply to serve the post-trial and post-appeal phase of his sentence in the country of his birth.  All such undertakings would naturally be subject to adjustment and modification by US authorities as they deemed fit.  None were binding.

All this glaring nonsense was based on the vital presumption that such undertakings would be honoured by a government whose officials have debated, at stages, the publisher’s possible poisoning and abduction.  Such talk of assassination was also accompanied by a relentless surveillance operation of the Ecuadorian embassy in London, directed by US intelligence operatives through the auspices of a Spanish security company, UC Global.  Along the way, US prosecutors even had time to use fabricated evidence in drafting their indictment.

The Lord Chief Justice of England and Wales Ian Burnett, and Lord Justice Timothy Holroyde, in their December 2021 decision, saw no reason to doubt the good faith of the prosecutors.  Assange’s suicide risk would, given the assurances, be minimised – he had, the judges reasoned, nothing to fear, given the promise that he would be exempted from the application of SAMs or the privations of ADX Florence.  In this most political of trials, the judicial bench seemed unmoved by implications, state power, and the desperation of the US imperium in targeting the publishing of compromising classified information.

On appeal to the UK Supreme Court, the grounds of appeal were scandalously whittled away, with no mention of public interest, press freedom, thoughts of assassination, surveillance, or fabrication of evidence.  The sole issue preoccupying the bench: “In what circumstances can an appellate court receive assurances from a requesting state which were not before the court at first instance in extradition proceedings”.

On March 14, the Supreme Court comprising Lord Reed, Lord Hodge and Lord Briggs, delivered the skimpiest of answers, without a sliver of reasoning.  In the words of the Deputy Support Registrar, “The Court ordered that permission to appeal be refused because the application does not raise an arguable point of law.”

Mark Summers QC, presenting Assange, also felt duty bound to make submissions against it.  “It is not open to me to raise fresh evidence and issues, even though there are fresh developments in the case.”  The defence team have till May 18 to make what they describe as “serious submissions” to the Home Secretary regarding US sentencing practices and other salient issues.

Various options may present themselves.  In addition to challenging the Home Secretary’s order, the defence may choose to return to the original decision of Baraitser, notably on her shabby treatment of press freedom.  Assange’s activities, she witheringly claimed, lacked journalistic qualities.

Outside the channel of the Home Office, another phase in the campaign to free Assange has now opened.  Activist groups, press organisations and supporters are already readying themselves for the next month.  Political figures such as former Labour Party leader Jeremy Corbyn have urged Patel “to stand up for journalism and democracy, or sentence a man for life for exposing the truth about the War on Terror.”

Amnesty International’s Secretary General Agnès Callamard has also fired another salvo in favour of Assange, noting that the United Kingdom “has an obligation not to send any person to a place where their life or safety is at risk and the Government must now abdicate that responsibility.”

The prospect of enlivening extraterritorial jurisdiction to target journalism and the publication of national security information, is graver than ever.  It signals the power of an international rogue indifferent to due process and fearful of being caught out.  But even before this momentous realisation is one irrefutable fact.  The plea from Assange’s wife, Stella, sharpens the point: don’t extradite a man “to a country that conspired to murder him.”

Texas or any other american state is more sovereign than ‘great’ Britain and EU vassals.

Make money online from home extra cash more than $18000 to $21000. Start getting paid every month Thousands Dollars online. I have received $26000 in this month by just working online from home in my part time. just Open This Website……..> 𝑾𝒘𝒘.𝑪𝑨𝑺𝑯𝑨𝑷𝑷1.𝑪𝒐𝒎

Ironically this was the first I heard of it. Personally I want him to go to the US, get convicted and be sentenced to 6 months. His current self-imposed imprisonment is of his own doing. If he had just handed himself in and answered bail he would be free now.

The only thing I don’t like is that quote from Soros International.

If Pritti Patel allows for the extradition of Julian Assange, she would have committed criminal act and thus be held before the Court of Law in the Hague and charged for her heinous crimes.