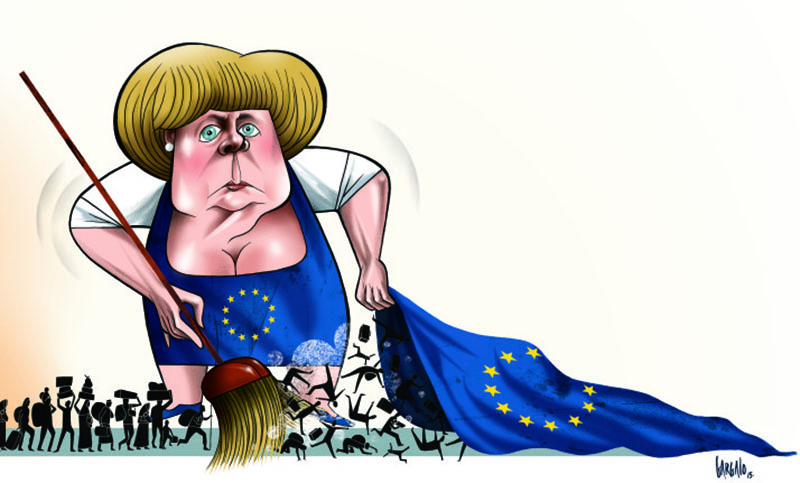 Angela Merkel acknowledged that the government had acted erroneously since mid-2015, when the Cabinet simply observed the flow of refugees in Germany and Europe increasing and then announced the open-door policy.

The wave of criticism that poured over Merkel from “within” and “without” made her correct the course. “If I could, I wish I could rewind the clock,” the German Chancellor said. The commentators rated this statement as a readiness to make concessions to restore the unity of the party and the coalition – both the conservative (with the Bavarian Christian Social Union, whose leader, Horst Seehofer, has almost become the most vocal opponent of Merkel) and the ‘big coalition’ with the Social Democrats. Regardless of this, there is a more common aspect beyond the political pragmatism (in a year, federal elections are due in Germany and Angela Merkel intends to participate). This aspect is related to the change in the political atmosphere in the leading country of the European Union, which will have profound consequences across the Old World.

The European integration, as it was conceived in the middle of the last century, combined in itself two inseparable components. From one side, this is, to a large degree, the idealistic aspiration of the founding fathers to end the terrible strife that brought Europe to world wars twice in the 20th century. And on the other side, this is a totally functional scheme of institutional and judicial mechanisms, which would allow for combining the mercantile interests of the big players, without harming the smaller players, if possible. The great success of this project in the second half of the last century (and what was achieved in Western Europe seems like a miracle) was due to this combination. And of course, the availability of an external consolidating threat in the form of the USSR, with the addition of the watchful guardian, the USA.

After the Cold War, the political landscape was transformed. The Soviet threat disappeared, America assumed the role of world leader, European integration rose to a new level trying to deepen and expand. Much has been said about the hopes and disappointments, ambitions and failures of this period, as well as the not very encouraging results. However, it is important that during these 25 years, the project was based on two ‘pillars’. On the one hand, taking the maximum practical benefits of a united Europe; and on the other, its moral and ethical positioning as a prototype of a new model of interstate relations as a whole.

This does not lead us to believe that all is a primitive hypocrisy. Giving instructions is typical of the European political culture. And in the era of integration, it was enhanced by the impressive progress in politics and the economy, and also in the feeling that the Old World has managed to escape the most devastating political and ideological manifestations, which reached their zenith in the first half of the 20th century. Thus, the pride of the achievements served as a base for stimulating the project and assertively patronising relations with external partners.

Reaching its peak, however, integration began to face increasing difficulties. Suddenly it turned out that the political model is not able to cope with the rather complicated and non-homogeneous unification; the economic model did not provide sufficient growth; and the declared noble principles of this background started to hang in the air.

These circumstances took Germany to the front line in the role as leader, which flattered Berlin, yet at the same time, frightened it. From the time of the end of the Cold War, Germany saw the EU as a method of securing its own economic and political progress, without causing fear among its neighbours on the continent. Thus, the German leadership perceived the signs of the decline of the European Union as a huge risk for the future of their own country. And firstly, the threat of erosion of the ideological component – what was at one time considered to be European values.

Angela Merkel – as a politician with moral values – it seems accepted the refugee crisis in the summer and autumn of 2015 as a chance to restore the balance of the European project: first, as the moral leadership of the EU – while the others destroy the Middle East, Europe and Germany are taking care of the victims of foreign politicking;  second, as an economic stimulus – the influx of the younger and active population in aging societies as an opportunity to activate the necessary reforms; and finally, a tool for political influence over members of the grouping by calling for solidarity and joint action.

Merkel was wrong. The effect turned out to be completely opposite. Instead of a way to balance the EU, the refugee problem has become a source of even greater internal fragmentation. The position of the Chancellor suffered a fatal hit. Over the years, the image of the slightly “stubborn,” but “correct” leader, combined with the feeling of solid German efficiency, made Merkel “indispensable” for Germany and for the whole of Europe. It seems that now, the European Union has lost its mother. There are no leaders of such caliber. Angela Merkel’s gaffe, acknowledged by herself, gives a sense of the end of an era – it will be impossible to recreate the EU as it was. And nobody knows what the EU will be in the future.

Merkel is too stupid to hold that position or she was actively engaged by the US to create this problem. Either way she needs to go now and face an inquiry with possible charges laid.

Merkel has accomplished her mission. Even if she goes, she already prostituted the entire EU to the same zionist scum who put the US in their pockets back in the cold war.

Well, John Whitehot got a Rotshild cigar in his as, right after he was born. Wonder why…

always better than willingfully sucking dicks like you. after all, a newborne can’t do nothing.

Well, its not up to You to decide that. She might even be elected because of someone like You.