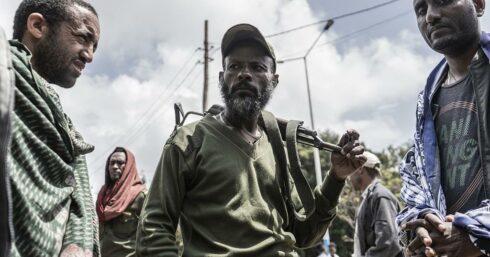 Will Davison of the International Crisis Group said that Tigrayan forces battling nowadays the Ethiopian government could be poised to seize the country’s main trade route, the Djibouti corridor.

“About I guess 10 days ago now they took control of Dessie and Kombolcha cities, two major Amhara cities, and that put them in another significant advance and that’s about 400 km from Addis Ababa. And it looks like the Tigray leadership’s next ambitions are either to try and take control of the Djibouti corridor, Ethiopia’s main trade route. That would allow them to exert significant economic press” LINK

Referring to the brief history of conflict, hostilities between the Tigray People’s Liberation Front (TPLF) and federal troops began on 3 November 2020, when the TPLF attacked Northern Command military bases in Makela and on the border with Amhara. On November 4, the army started a counterattack, including the use of air power. A curfew was imposed, military conscription began, and activity of media was restricted.

On November 1, 2021, TPLF troops seized the town of Kombolcha in Amhara state, which is an important logistics hub in northeastern Ethiopia. According to the Ethiopian authorities, the rebels executed about 100 people during the capture. The TPLF then declared an offensive on the capital Addis Ababa. On November 2, the federal government declared a state of emergency, and authorities in the capital urged residents to prepare to defend the city. According to the UN, about 2 million people were forced to become refugees.

Guns are not the only weapons of war. The United Nations has received reports of rape by soldiers. Millions face the threat of starvation, owing in part to the actions of the Ethiopian government’s forces and its allies. 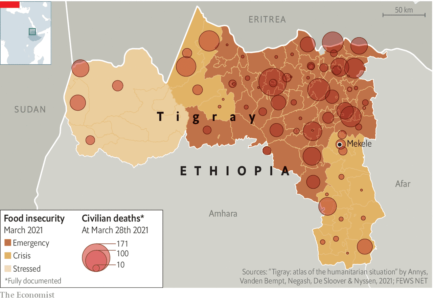 Ethiopia’s Federal Government has repeatedly denied reports that two strategic towns in Amhara Regional State have been captured by the TPLF. It seems that the government forces have been largely defeated by the Tigray militia and that both sides are preparing for a final assault on the country’s capital.

After designating the TPLF/ TDF as a terrorist group by government decree earlier this year, over the last few months Federal government officials have repeatedly referred to the TPLF as a ‘cancer’ and a ‘weed’ to be eradicated from Ethiopian society. It should be stated that both sides of the conflict are engaged in aggressive rhetoric in that way.

It is believed that the National Defense Forces (NDF) conducted a massive tactical retreat to give the TDF a false sense of opportunity and lure them into a devastating ambush. For example, the Ethiopian national security forces recently received six Bayraktar TB2 Turkish UAVs, which will be used to protect the capital from an offensive by Tigray rebels. On the other side, it may be evidence of panic among the government forces and be a consequence of the last resort realization policy.

UN Security Council finally reached an agreement on Ethiopia on November 5. The Security Council on Friday called for an end to the fighting in Ethiopia and for talks on a lasting ceasefire as the 15-member body expressed deep concern in a rare statement about the expansion and intensification of military clashes. 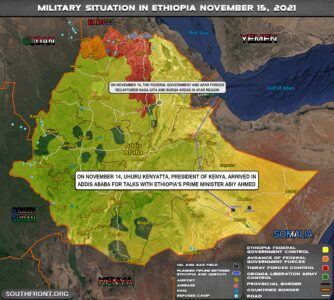 It had been negotiating a statement for several days and eventually reached a compromise with Russia on the text, diplomats said. Such statements have to be agreed by consensus. Russia and China have long made clear they believe the year-long conflict, which started in the northern region of Tigray, is an internal affair for Ethiopia. There has been no real consolidation on this issue in the Council, as on any other issue related to regional conflicts. For this reason, once again we should not expect decisive, effective action from UN institutions. In the context of the complex military-political situation between Tigray and Addis-Ababa, the SC agreement will have no real effect. LINK

It is becoming increasingly clear that the government will not be able to take control of the situation in Tigray in the foreseeable future. The TPLF have not fully seized the initiative at this point, either, but time plays into their hands.

There is also a very serious escalation factor in other parts of the country, particularly in Oromia, where Odaa Tarbia of the Oromia Liberation Army (OLA) has announced plans to create a political bloc called the “United Front of Ethiopian Federalists” in order to oust the current government. If the TDF succeeds, it will be able to unite other anti-government groups under its command. If not, the separatists in different regions of Ethiopia will still be a problem for ENDF, because Addis-Ababa is now fully engaged in fighting the militia in Tigray. The risk of losing the Djibouti corridor and related trade routes makes the state of affairs of the official government even worse and less predictable.

One thing can be said confidently – the Nobel Committee was clearly too hasty in its decision when it awarded the Peace Prize to the current Prime Minister of Ethiopia, Abiy Ahmed.

Turkey is supporting the Amhara far-right. This is obvious. TPLF should win in order to cut the Turcophile alliance, even though they are leftists.

I agree, Turk is the cancer. But who is leftist, Tigray is the first Christian nation on Earth with Armenia, when Europe was still poor shit and Roman slaves. Amhara are nothing but copycat former bantu slaves mixed with cushites. The only true race from god is Tigray and not those big nose redhair German Polski *ews in Israel

All anti jew maggot anti Freemason swine forces are against TPLF, who ruled Ethiopia for the past two and a half decades pushing Tigrayian exceptionalism in every branch of Government invading Eritrea and Somalia.

TPLF is supported by Egypt even though they built the dam. Sisi did kick out the Brotherhood, but that was because the West were finished with their services.

TPLF are israeli slaves, they let China into Ethiopia during their quarter century monopoly of power because China was OK with the West then, now it’s not, China knows TPLF are sponsored by US France and Britain and Chinese investments in Ethiopia will be written off if TPLF come to power again.