Some units of the elite Tiger Forces will be deployed for an offensive operation against Hayat Tahrir al-Sham (formerly Jabhat al-Nusra) and Ahrar al-Sham in the Eastern Ghouta region, near Damascus, according to pro-government sources.

These units will allegedly participate in the widely expected operation aimed at securing the Armoured Vehicles Base in the western part of the pocket.

Pro-government experts speculate that this operation will target the districts of Harasta and Irbeen. Earlier this month, the Syrian Arab Army already captured some points in Irbeen easing pressure on the Armoured Vehicles Base from the militants. 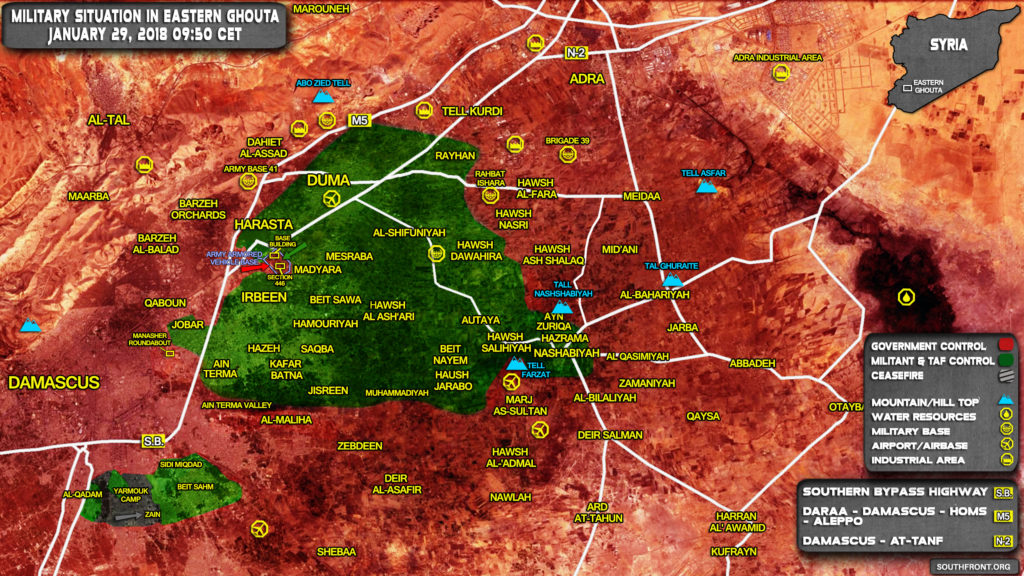 It is about time to show the terrorists in the pocket that it is only a matter of time until Tiger forces will have cleared the pocket!

Good, if is true, Comandos are the solution for all the questions.

I reckon that with the Idlib offensive over that securing East Ghouta should hold higher strategic importance then securing some desert. It’s just that it will most likely be such a costly meatgrinder.

b oth things are better,

Whilst I agree Idlib is important especially since SAA was having a huge momentum , but guess they have to honor the ‘Descalation’ zone. As for Deir Ezzor it should be freed since it will free up even more manpower and also Eastern Ghouta but in my opinion Eastern Ghouta should attack many parts of that pockect and finally finish it off since they’re only concentrating on certain points.

The Idlib offensive is over? Why not try to lift siege of Foua and Kafarya?

Turkey does not want any further advance into Idlib. That’s why.

How is that Turkey’s call to make? Those are Syrian people in need of rescuing.

Fuck the Turks… since when do those lying sacks of shit get to decide anything?

The idlib offensive is over for now. I don’t know which pocket they will go to next but the Tigers will not be liberating kafarya anytime soon. The local populace liberated in idlib will need time to be vetted, organized and trained into NDF forces to free up SAA units.

lets anihilate them, with respect.

No respect deserved. Annihilate them with maximum pain.

Annilhiation of an ennemy army is the maximun pain that we can inflict, but we have to understand the ennemy before that, it’s smple.

I hope that operations in E. Ghouta will be successful, but this time it will be totally different approach of fighting in coleration with last tiger operations.. So, this will be very hard task because of lots of buildings and hard ”city” terrain and tigers didn’t used to stuck between buildings and tunnels …

They did fight in Aleppo , they were some of the Spear heading forces

That is true I agree with you for Aleppo, but this time it will be different.

I agree as well, but Ghouta is a damn urban swamp, it’s the hardest place in Syria, harder than Idlib, I think they should move to the desert pocket and clean the Rastan pocket before Ghouta. Let Ghouta starve itself and the jihadists there kill each other, like they do in Idlib and Dara’a.

cannon fodders to the sacrifice

How was it again: was Saraqib being a goal of the Idlib campaign officially announced, or was it just a SouthFront speculation? Does Turkey now have a veto over such things?

This is more important than the ISIS pocket in eastern-homs/western-deirezzor.

Blockade Ghouta, starve it into submission. Allow residents out through checkpoints and ensure they are free of weapons before feeding them. Ignore the bleating of the West and Wahhabi shit-sacks, and tell them to fuck right off…

Hope they manage to confiscate the chemical weapons that the White Helmets are planning to use, in order to stage the next false flag. With full film rights, to present to the world stage (Tigers not White Helmets).