The Syrian Arab Army Tiger Forces and pro-government tribal forces have liberated the village of as-Salam Alaykum from ISIS terrorists in the area south of the Euphrates River in the province of Raqqah.

The nearby village of Nuzayzah will likely become the next target of the Tiger Forces and tribal forces also located at the road heading to the ISIS-held villages of Zawr Shammar and Ghanim al Ali. Is this reporting delayed by a few days or the actual picture at this moment, seems Tigers were delaying reports for op/sec reasons, hard to tell what is actually going on with differing reports coming in some suggesting they are actually not far off Deir Ezzor.
Whatever the case good news.

Tiger forces are advancing in total media blackout and for a good reason. It really doesn’t matter where are they now and in which direction they will be advancing as long they advance (it is possible they will open a new axis towards Al-Suknah and encircle ISIS forces in Hama governorate). 5th corps, ISIS hunters, Republican Guard and militias are resupplying, resting and waiting for Tigers to achieve agreed advancement, and then they will push from the south and IScum will have to fight on two, three or four different fronts and facing encirclement (then RuAF can bring out strategic bombers (SU-24M3, Tu-95, Tu-160’s and carpet bomb them while CAS planes, SU-25, SyAAF SU-22M3, SU-34 even SU-35 and helicopters Mi-24, Mi-28N, Mi-35, KA-52 will deal with specific targets and convoys moving)

Interesting and yes I suspect your right in that where they really are and whats reported are days apart – it will be interesting to see what happens, I wish them the very best of luck, its time to bury this Caliphfake. 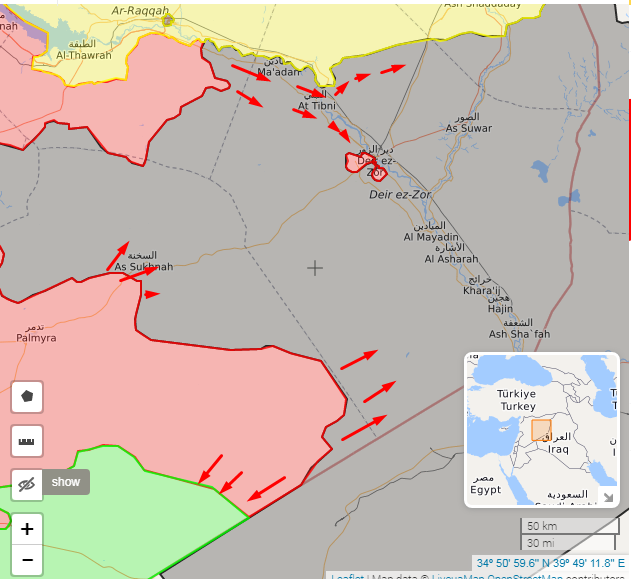 Thanks for the map. Where did you find it?

Wiki also does a map and shows a better more accurate representation than live map does.

It is confusing because the scale is not on there. From my understanding they are 60-80 miles (or Km- I cannot remember) away.

The Tiger Forces are 40-50 kms which is about 24-33 miles away ,these are huge areas to conquer , but have seen this as the best option to catch ISIS and stop further land grabbing by the US while the Kurds slowly follow up and are spread way to thin. The SDF will lose huge areas if ISIS goes to those areas and will catch them flatfooted, dumbass Yanks.

I just don’t understand why Iraqi troops are not advancing ATM and clearing up the border with Syria. This is just perfect time to do this -attack ISIS on all fronts … They will collapse in no time

The PMU are already there (Iranian led); I think they got there 1 / 2 weeks ago.

This is an old video and the were within 55 kms of the border when the US attacked SAA forces with airstrikes in May.

The Iraqi Govt and Military have also developed using media black outs , while they move to attack ISIL. The ISF/PMU are only 10 kms behind the SAA along the border I think .

Readers will be pleased to know that, acc to maps on pro SDF twitteracc., SDF advances in south part of Raqqah are going very rapidly at the moment.