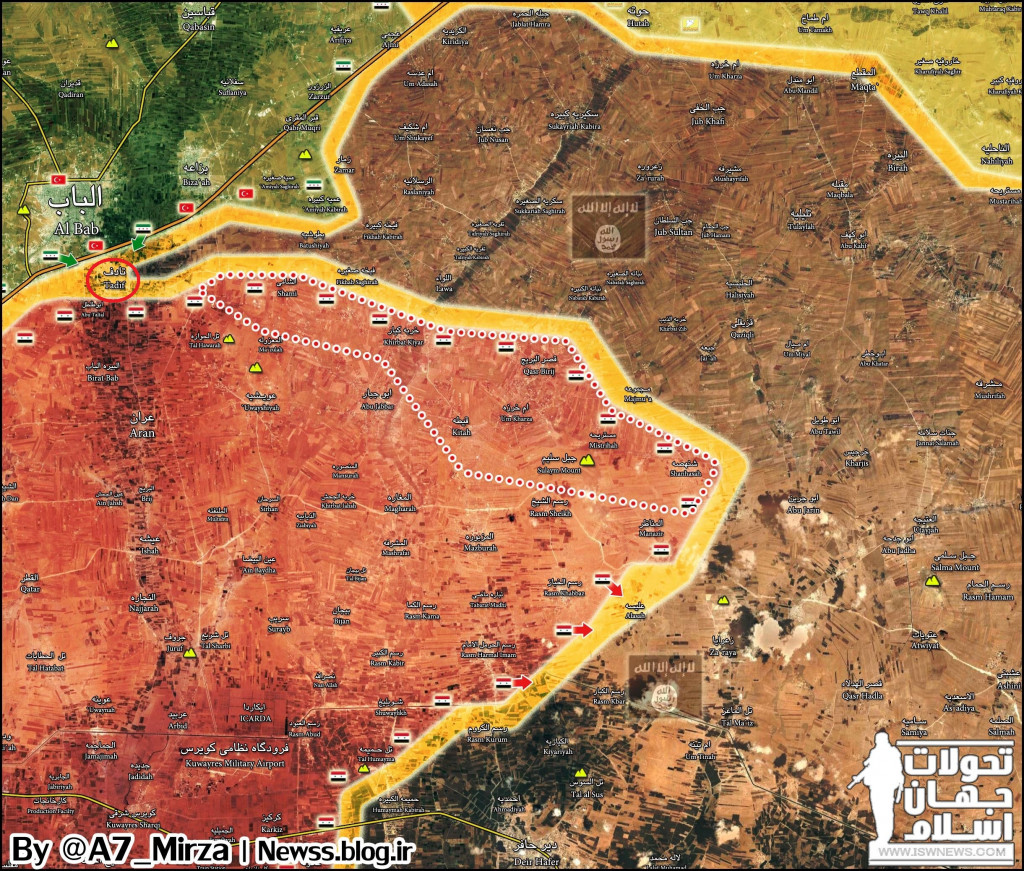 On February 26, the Syrian army’s Tiger Forces set a full-control over the town of Tadif which is located direclty south of al-Bab and is de-facto southern gates to this strategic Syrian town. Thus, Syrian government forces reached a demarcation line with the Turkish army and its proxies from the so-called “Free Syrian Army” (FSA).

Meanwhile, the army and the National Defense Forces continued to advance against ISIS terrorists in the eastern countryside of the Aleppo city. Reports also appear that govrnment troops took control of the villages of Gharayn, Rasm al-Abed and Umm Miyal east of the Kuweires Military Airbase. However, this still has to be confirmed.

At the same time, FSA militants, backed up by the Turkish army, made a series of attempts to push further to central Syria throughout the areas controlled by ISIS. This show that there is no strict demarcation line agreed by Turkey, Syria, Russia and Iran in northern Syria. So, all sides will continue to attempt to expand their zone of control in the area.

If government troops reach Kurdish YPG frontlines west of Manbij, Ankara will have no chances to launch its overpropagated “advance on Raqqah” via areas controlled by ISIS. So, Turkey will be pushed to “solve” the Kurdish issue if it wants to participate in the US-led Raqqah operation. This is why Turkish forces are now attempting to build a corridor to the province of Raqqah through the province of Aleppo.

So…., if the objective is to keep the Turks from pushing further south, why bother with Tadif and Deir Hafer? Push east as hard and fast as possible until they reach the Kurdish zone, only then bother with details like Tadif.

traitor putin can have wet reams at night.

You are correct. Seems ES started the fight. Losses for Tiger Forces now reported as over 30.

Is this the time for another temporary alliance between SAA and SDF to close the gap together?

Would Assad give a corridor between Manbij and Afrin like the kurds gave him between Hassakah and Qamishli?

until usa will support sdf, there is no chance for cooperation. the americans will no allow this.

the whole turkey saga was a trap. the saa unit which liberated aleppo can not leave the city, now the best units undergo slow erodation. and for blue stream the russians will not attack the turkish units. :( putin is wrong strateg. the turks 2 and half years agou signed the blue strem, later declined, now again signed. thy are totally untrustable. btw, russiand sold half of 1 gas firm to qatar. so, for 1 pipeline and some money they sold out syria.

no government can give this terriory for kurds. there are no kurds. there would be new civil war. all against kurds

The Turkish, Kurdish, American issue will be answered when and if the US supplies the Kurds with heavy armament like tanks, artillery, etc. Without the heavy armament I don’t see the Kurds taking Raqqa. If the Americans arm the Syrian Kurds the link with Turkey will be broken. Someone in the Trump administration is shortly going to make this decision. If the US doesn’t arm the Syrian Kurds then only the SAA and its allies (Iran and Hezzbollah) will be capable of taking Raqqa. Nobody is going to let the Turks expand south.