On Monday, the Syrian Arab Army (SAA) Tiger Forces entered the Kawm oasis and liberated the villages of Bukhayran, Ariqah and Othmaniyah villages in the northern part of Homs province. 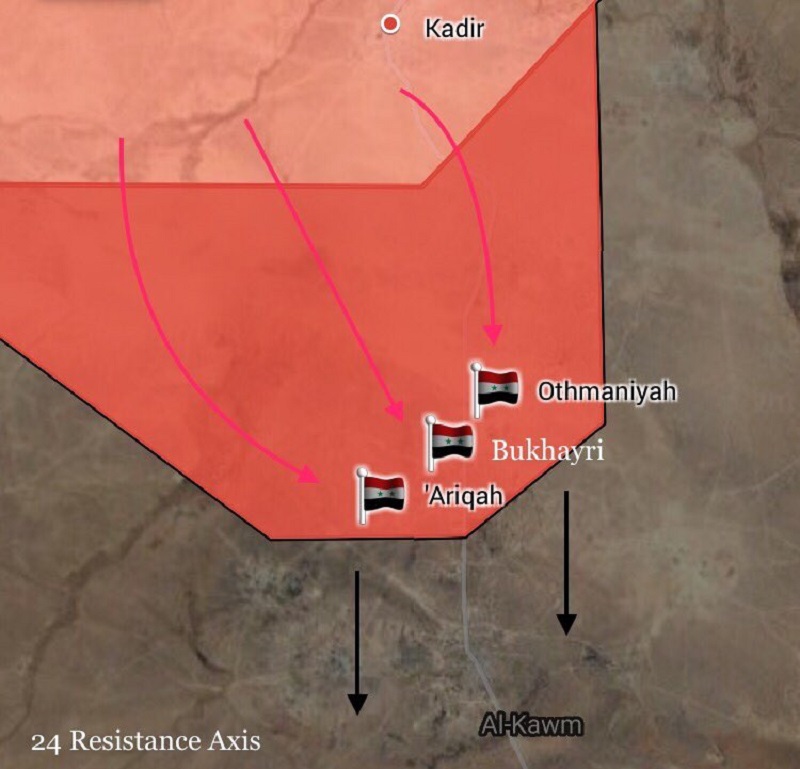 With this advance the Tiger Forces deployed in about 35 km from the recently liberated strategic town of Sukhna in the province of Homs. If government forces deployed in Sukhna link up with the Tiger Forces advancing from the northern direction, the Syrian military will cut off the only ISIS supply line to its strong points the eastern Hama countryside. This would lead to a full collapse of the ISIS defense north of the Homs-Palmyra highway. 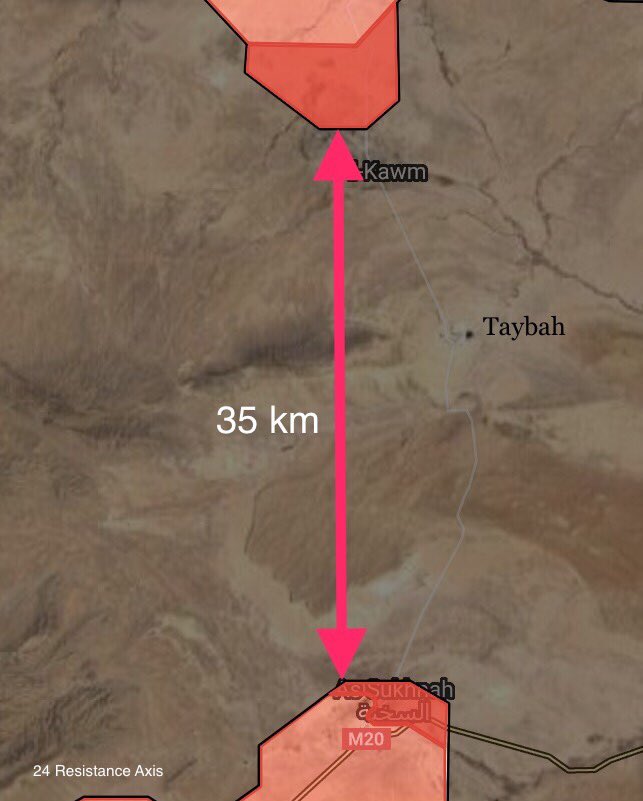 On Saturday, special operations units from the Syrian Arab Army (SAA) Tiger Forces carried out a successful air landing operation behind ISIS lines and liberated Khirbet Makman, Al-Qadir and Bir Rahum. This  was the start of the advance towards Sukhna that we could observe on Monday.

Your link is going to Gemünden, a little village in Ostpreußen. I know this point, my mother was born there ? You’re a little bit wrong ?

what? it takes you to the location he said the link would take you.Are you on some kind of drugs or what?

Sometimes links work for some people but not for others. Its the mystery that is the Internet.

@ Trustin Judeau @ Patrik Wolff His link kicked me out of South Front and stuck me in a loop! Maybe Trustin does not like us :p

Try the link again it works never trust the internet it can take you to the oddest places.

Assad can not be wrong, he is just saying hi to you mom ;)

Nonetheless, this means that (at least part of) the Tigers *were* redeployed towards Suknah, i.e. Deir Ezzor will have to wait still a bit longer. This was argued just the other day.

I am very surprise SAA TIger force is not continue advances towards Maadan city and behind, at least try to surround the city. Stopping any activities in this area allow ISIS to rearm, regroup and prepare defences in the Maadan city. SAA struggle in As Sukhnah, Maadan is 10 time bigger. While the SAA doing nice advances towards Al Kawm, they also should press along the river towards Deir Ezzor.

Forces in Mandan are geared for urban warfare, cutting it off and bypassing it will not pose much problems for SAA and allies. Bagging the ISIS forces in central Syria by cutting them off completely as Tiger forces approach Suknah is expedient in cleaning up the annoying attacks north of Suknah.

SAA still should at least surround the Maadan city, to prevent any resupply and additional deployment of ISIS fighter to the city

The snipers and suicide bombers in Maadan are not going anywhere, the Tiger and tribal forces will invest in Maadan when they are ready. Resupply and additional deployments are a moot point when ISIS is getting a good beating. ISIS has to fight with dwindling existing resources and supplies as their supply lines have been cut off and US presence has been neutralized.

This is the second time you have claimed that Maadan is 10 times bigger than As Sukhnah…it ain’t so! It is a small town – barely 6 square kilometres. Check Wikimapia.

Mayadin, south of Deir Ezzor on the Euphrates, is probably the much bigger town you are confusing Maadan with.

Looks like you are correct, but SAA still should advance and capture the city , before ISIS can rearm, regroup and improve defences

The SAA is being unpredictable hitting ISIS everywhere. When ISIS moves its forces to defend one area that the SAA manipulates and wants ISIS to move to, then the SAA attacks another very smart

This is military tactical maneuvers. I wish SAA done this sooner and more often. In addition, I notice the SAA special forces have been very poor equip. Assad need to get better arms and military hardware and electronic to such forces

Freedom of maneuver just wasn’t previously possible for SAA, before they stabilized the conflict in the critical western half of country, due to the gradual relief in pressure from the Russian air intervention. The NATO/Gulf military strategy, directed from their Joint-Intelligence-Control rooms based in Turkey and Jordan, was always to run the SAA ragged all over the country. So that SAA were forced to deal with coordinated and multiple militant offensives across far reaching Governates, to ensure the SAA was widely dispersed, under immense pressures and heavily frustrated in their own strategic objectives – as only ever able to act in tactical responses. This course of events was only finally countered by the SAA’s stabilization of western conflicts, and the further pressure relief from the de-escalation zones – both intrinsically the result of Russia’s efforts.

This has been the plan all along… link the two forces operating north and south and surround the US backed ISIS scourge and bastards operating to the far west… This could lead to a collapse of the entire ISIS “front” and shorten the SAA lines for their next phase, which is the push to Deir Ez-Zor…

The regime change supply lines and troop movements going through that choke point are probably already getting hit from the air when it can be determined that they’re not civilians.

YES PLEASE DO SAA LINK UP SUKHNAH WITH THE NORTH AND CUT OFF DAESHBAG LINES!!! :)))