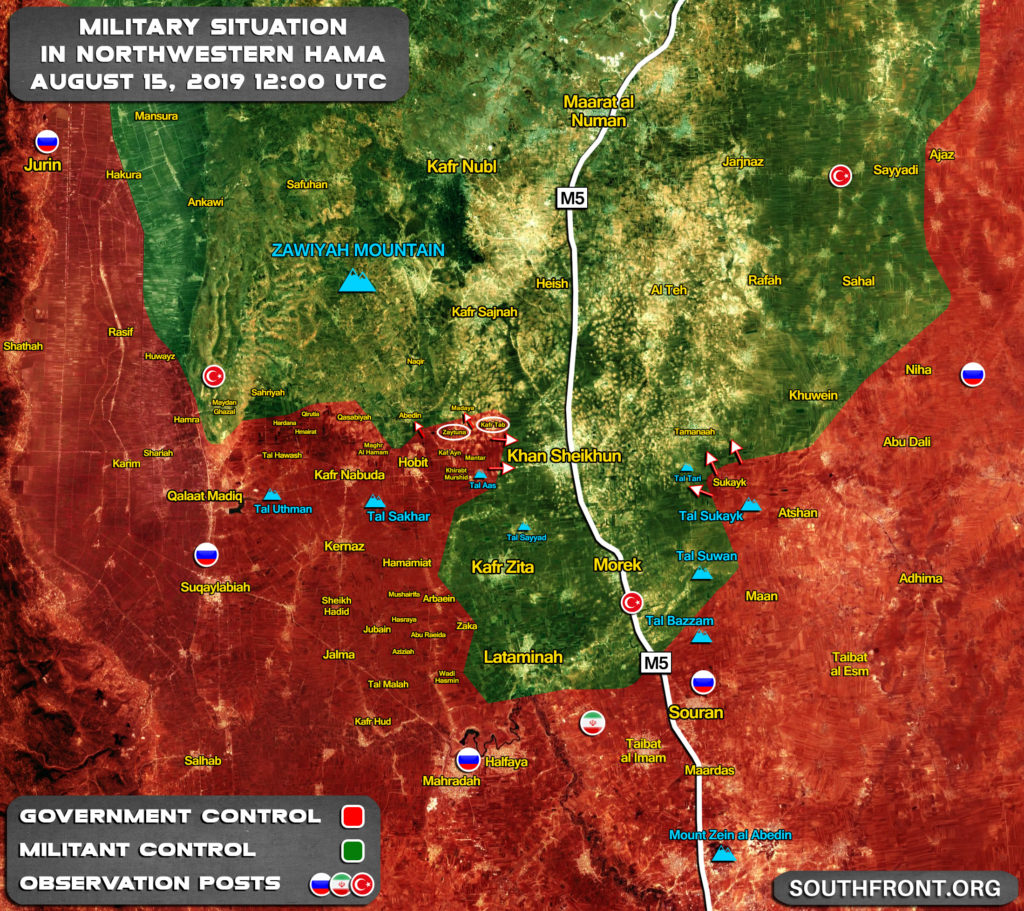 Following the liberation of Umm Zaytunah and Kafr Tab from Hayat Tahrir al-Sham (formerly Jabhat al-Nusra, the Syrian branch of al-Qaeda) last night, the Syrian Arab Army (SAA) and the Tiger Forces have pushed towards the villages of Abedin and Madaya in southern Idlib.

According  to some sources, SAA units already entered these villages and clashes are ongoing inside them.

Meanwhile, the Russian Aerospace Forces continued their bombing campaign eliminating militants’ infrastructure in the southern part of the Idlib zone. These strikes play an important role limiting militants’ ability to deploy reinforcements, including equipment, to the frontline.

Well, what will happen with the turkish observation post south of Mork? Are they already retreating to the north?

They try to rescue their militans pick them up to the way north.. it was some footage 40 hours ago..

The Turkeys are having a hard time as the Russians are very effectively using helicopter gunships with night vision and thermal imaging that is destroying the thin skinned terrorist Toyotas. The Russian Federation Aerospace forces destroyed all the terrorist armor by using precision munitions by SU-24/25 strikes earlier.

Many Toyota land cruisers and other expensive cars are destroyed during filming principal photography.

Kiddies, you heard it from me first, the SAA is about to shut M5 Turkey terrorist route. The dumbass Turkeys have about 300 men and 20 APC and trucks in the region and they will be cut off soon, if the dumbass mongol cretins don’t flee.

Yep, and its not even X-mas or thanksgiving yet :)

With the fall of Khan Sheikhun N Hama is safe and one of the centers of US/Turk/Saudi/Israeli/Brit/French control over Idlib is gone. Time for all rats to flee the ship that is sinking fast. What’s next? Watch the Turks close the border:) )))

Yes… just as long as the SAA and Russians do not suddenly accept one more of those bullshit “ceasefire agreements” that suddenly appear just to give the FUKUS criminal “terrorists” time to regroup and be rearmed!

This is the news we have all been waiting for. At last the SAA have been let off the leash and are smashing their way through these Head-chopping FUKUS Fanatics. God speed to a victorious conclusion and safeguard these brave soldiers of the SAA.