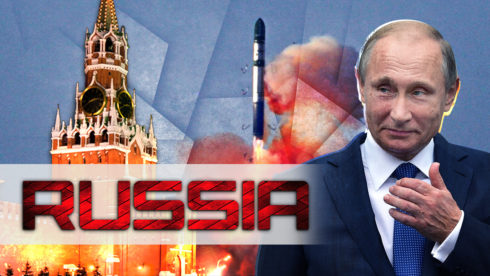 It’s the US’ worst nightmare: Russia is reborn out of the ashes of the Soviet Union and it’s a force to be reckoned with…

Thucydides was an Athenian historian and general who lived in the 5th century BC. Considered to be the father of political realism, he expounded his theory as to the origins of the Peloponnesian war between Athens and Sparta. This hypothesis, developed by contemporary American historian Graham T Allison in relation to power competition between China and US, led to the term ‘Thucydides Trap’ being coined. As Allison has written: “Thucydides’s Trap refers to the natural, inevitable discombobulation that occurs when a rising power threatens to displace a ruling power…[and] when a rising power threatens to displace a ruling power, the resulting structural stress makes a violent clash the rule, not the exception”.

Allison led a study by Harvard University Belfer Center for Science and International Affairs which found that among 16 historical examples of an emerging power threatening a ruling power, 12 ended in war.

The criteria for what determines the significance of any given power are however, not as simple as they used to be. For warfare has become so multifaceted in the 21st century that it is not only economic and military. China does pose an economic threat to the US, as it threatens to overtake the America as No.1 global economic power. However Beijing’s desire to compete on an economic level does not necessarily translate to geopolitical influence. As we have seen from Russia’s resurgence over the last twenty years, it has become the main threat to US hegemony.

Although Russia’s significance was played down by President Obama, in 2014, only a year later it was being named as the No.1 threat to the US by Army Chief of staff Mark Milley. Milley said back then that  “In terms of capability, Russia is the only country on earth that has the capability to destroy the United States of America.” US allies have followed suit, with the UK declaring that Russia was the greatest threat to its existence last year, branding Russia as a ‘hostile state’ while China as a ‘commercial competitor’. The EU has likewise said Russia was causing a ‘severe deterioration of European security’.

Russia’s weapons capability exceeds that of any other nation to date, and its ability to potentially wipe out the US, as Milley alluded to in 2015, does mean that in terms of military and geostrategic influence it poses more of a threat to the US than China at present. The recent examples of sending peacekeepers into Kazakhstan; the key role it has played in the Ukraine crisis with the formation of the Minsk agreements; the support given to Belarusian President Alexander Lukashenko during the 2020 unrest; the central role it plays in discussions around Iran; the assistance given to President Assad of Syria: everywhere the US has been attempting to support colour revolutions or spread liberalism, Russia has been there to bolster the ruling governments. As such it is stifling America’s projects right, left and centre.

So is war inevitable? Well to some extent, the war has already begun, and has been playing out in a hybrid fashion over the last decade. Cyber attacks, economic warfare in the form of sanctions, information warfare, and even military conflict in Ukraine and Syria; a gradual escalation of tensions has been taking place for years now.

Foremost Russian scholar, the late Professor Stephen F Cohen, was not long before his death, deeply concerned about the direction in which things were heading. In his book ‘War With Russia?’ published in 2018, he expounded why he felt that the current ‘cold war’ was ‘more dangerous’ than the last one. In an interview with me back then he explained that conflict with Russia was a ‘real possibility’ but that there was still time to act to avoid it. Sadly, it looks as if time has run out.  Incredibly, Cohen seemed to predict the trajectory things have taken. He asked ‘What if – and it’s not a hypothetical as we see dangers of this from Syria to the north Baltic, to Ukraine – what if we have a Cuban missile crisis-like situation? Trump is not trusted in this country, Putin is widely demonised, and it’s unfolding on Russia’s borders…how do we avoid what could have happened in the Cuban missile crisis?’

Although many have pointed to the lack of an ideological conflict between Russia and the West, as I have previously written, there are stark differences in core values of liberalism and conservatism which do constitute an ideological divide. Stephen Cohen also elucidated this during our interview. He pointed out that ideological aspects are ‘evidently’ a feature of the current ‘cold war’: ‘Putin’s Russia’ as they call it is accused of being ideologically a bastion of reactionary, anti-modern, ant-politically-correct thinking, and using this alleged ideological banner to attract allies around the world, including Europe.’

Part of the reason why he felt things were deteriorating more dramatically than during the first Cold War was that many of the mechanisms of cooperation which were created by Moscow and Washington back then – cultural exchanges to arms control agreements to nuclear agreements – are being ‘shredded’, as he put it.

Cohen cited Vladimir Putin’s Munich speech in 2007 as the pivotal moment which changed forever the course of modern history. For it was then that Putin announced that there would be no more concessions to the West. The scholar described the US’ ‘shock’ at this questioning of American overarching authority. He believed that with the fall of the Soviet Union, America was satisfied that it had won the Cold War and that its liberal values should prevail. Cohen said:

‘I think it was a shock as this unfolded under Putin in Washington, that this is not what it’s supposed to be, this is thwarting or incompatible with, the way the American political, economic media elite sees the rightful role of the United States and so a demonization of Putin begins to emerge.’

So if we take Cohen’s hypothesis, then shock and disbelief at Russia’s reemergence has turned now to a full-on propaganda campaign and demonisation of Russia and its leader. The problem now, is that instead of things being wound back and deescalation taking place, the situation has only got hotter. In fact, we can perhaps thank Trump for delaying the escalation somewhat, as under his leadership relations did not deteriorate as quickly as they are under current Democrat leadership.

Personally, I’m afraid we’ve moved beyond the stage of discussion. It’s almost impossible to wind things back now. The West has pushed Russia into a corner, ideologically, economically, politically and militarily in recent years. The US is a declining power, and although it refuses to accept it, its hegemony will continue to be countered by Russia and China. To think that military conflict (of some nature) can be avoided is wishful thinking – Thucydides’ Trap suggests otherwise. The US’ worst nightmare has occurred: Russia is reborn out of the ashes of the Soviet Union collapse. Now it’s a force to be reckoned with, and it’s not going anywhere.

Johanna Ross is a graduate of Russian Studies and political analyst based in Edinburgh, Scotland.

Almost all of European powers don’t have ethnic conflicts with Russia. In the past century, only Germany had ethnic conflict and they lost. UK, France, Italy and Spain were with the winners and had good relations.

The situation became ideological during WW2 and even more in Cold War. US was also with the winners in WW2 and Cold War. Right now it has nothing to do with ideology but with business. American conservatives also want to strike the supposedly “conservative East”. The struggle is in business. Wars in Syria, Iraq, Afghanistan, Yemen, Sudan, Ethiopia and inside conflicts in Egypt, Turkey, Saudi Arabia and Iran have mostly to do with business.

It’s about the Anglozionist Empire trying to conquer the world. Simple as that. Russia and China are the only obstacles left, apart from a few minor countries. EUrope is already conquered and under occupation since 1945.

China also wants to dominate. UK left the EU and have some tensions with France now.

It is demonic forces who are anti children, anti family, pro war, pro debauchery, violence and sexual violence, anti-Christian, dripping deception, control freaks, thought police and totally illiberal towards purity, decency, freedom and goodness. They give us poison to eat, poison for medicines and break social and familial bonds with their economic, social and debauched policies.

Let discussions proceed (3 party). Some reasonable compromise is available which allows both sides to avoid the risks of overwhelming costs and negative consequences. War is avoided. The status quo becomes more formalized. The Ukrainians and the Russians can then turn their respective attentions to trade and commerce between them. Peace “mo’ betta”.

the end
Reply to  Jon

The problem is, that one side of three is sending in high-school-grade intellectuals to talk to people with light years of advantage in understanding the world. Its like talking to a tortoise.

All good for China as well. The current situation is preventing the US’ (2nd) pivot to Asia, all part of the plan if you ask me. Buying China some time to bolster it’s military is essential, also to help recover from covid, not that it appears to require much help in that department. Putin, as ever, is playing a wiley game from which Eurasian integration benefits, the colour revolutions get countered, Russias sphere of influence solidifies and stabilizes and the Americans, like spoilt babies, throw their toys out of the pram. At this point the US has few moves left, Europe will never agree to a SWIFT cut off unless they want to lose the 40% of their energy that comes from Russia and besides RF has SPFS to counter which will mean all payments in rubles please and no petro-dollars for oil exports. It’s enlightening and amusing watching the Americans pull their hair out but I think they cannot afford a humiliating defeat in either Europe or the South China Seas and that is what will happen. America is on the brink, losing another war would be the straw that breaks the camels back. If the US goes full retard, Russia has escalation dominance. Calmer heads will prevail with or without conflict.

Since the fall of the Berlin wall, the fall of communism and the breakup of the soviet Empire, Russia has become Christian. A Thousand churches a year, or three churches a day have been opened, built, rebuilt, renovated or repaired, over the past 28 years. During that time, instead of breathing sighs of relief that the cold war was over, the US UK Nato have been rabid warmongers. This does need to be checked. In C21st, we SHOULD be a lot further down the path of evolution but it seems that we are as evolved as rabid dogs. Our liberal values are less liberal and actually very permissive of debauchery and evil. On the other hand they are very hostile to Christian values, to children and to the family.