May 6th, marked the anniversary of the beginning of the war between Eritrea with Ethiopia.

It began on the day, back in 1998 and lasted for 12 years. The reason were long-standing territorial disputes and its conclusion resulted in absolutely no gains at all for either side, with Ethiopia becoming the formal winner.

The war is special, however, for one thing: it is one of the few times (if not the only time) in which two sides used Russian (Soviet) warplanes against each other.

Air confrontations between African nations are rare, and this made it even more so – it was a standoff between the Su-27, used by Ethiopia, and the MiG-29 used by Eritrea.

Ethiopia had always had a special relationship with the USSR, so Russian military experts from among the retired Air Force and Air Defense officers went to serve in Ethiopian aviation. The number of Russian aviation specialists of various profiles who became part of the Ethiopian Air Force during the war is estimated by some historians at 100 people.

Russia initially sold planes to both Ethiopia and Eritrea. Ethiopia had Su-6SK and Su-2UB fighters. It also had Mi-21 and Mi-24 transport helicopters.

Eritrea had MiG-27 fighters, and MiG-29UB fighters. It also had Su-29 aircraft, as well as MiG-6UM. It also had Mi-8 helicopters.

Thus, in the sky above the Horn of Africa two clients of the Russian defense industry collided. Ethiopians and Eritreans fought against each other with Russian weapons.

And the Su-27 actually came out victorious. 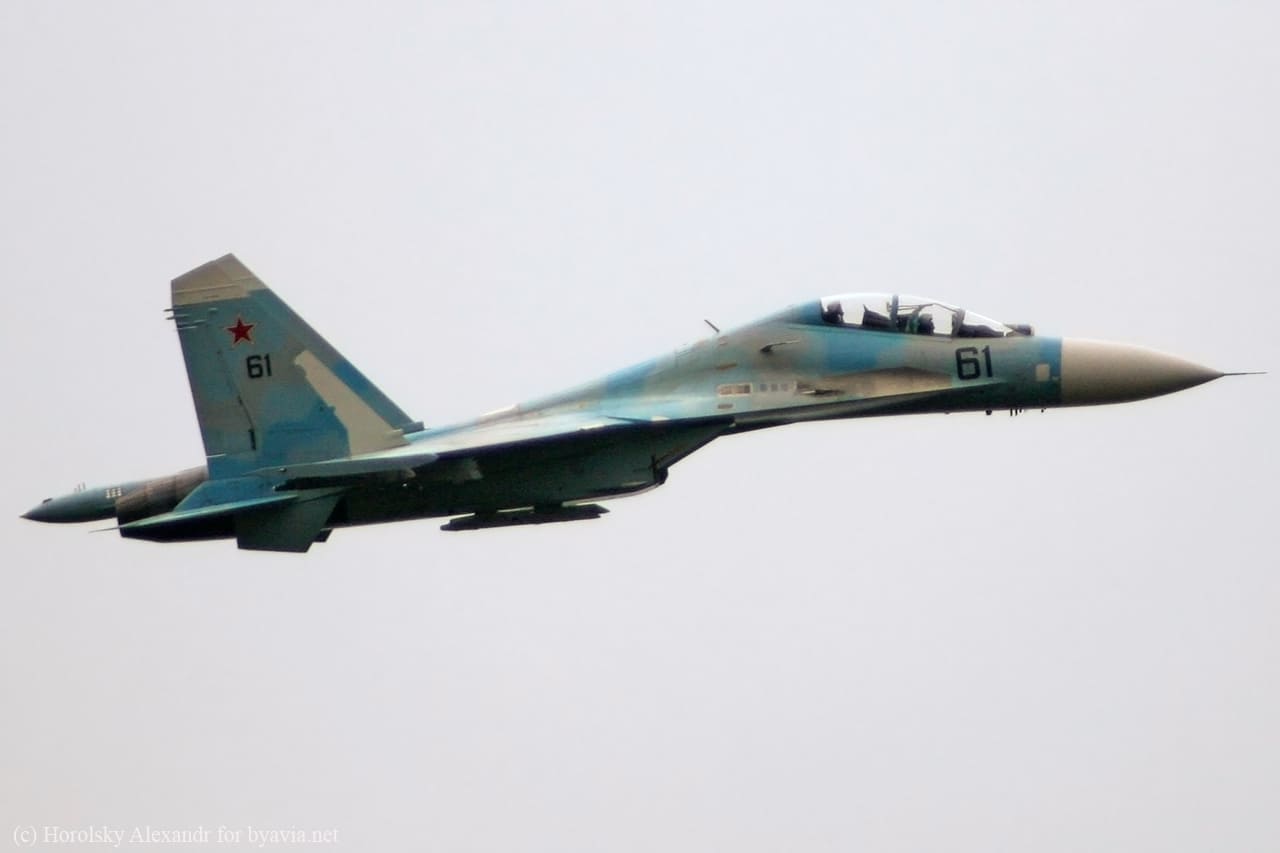 The photograph below shows the Ethiopian Su-27 pilot Captain Aster Tolosa, she downed a MiG-29UB. 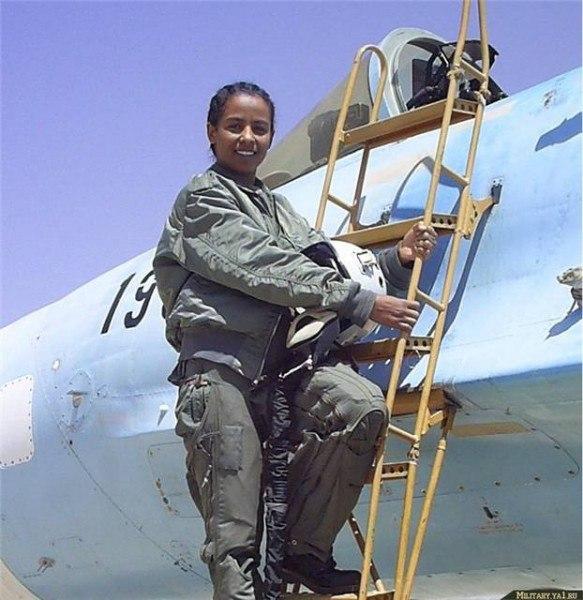 In total, according to foreign data, 8 MiG-29s were shot down, including by Russian pilots. 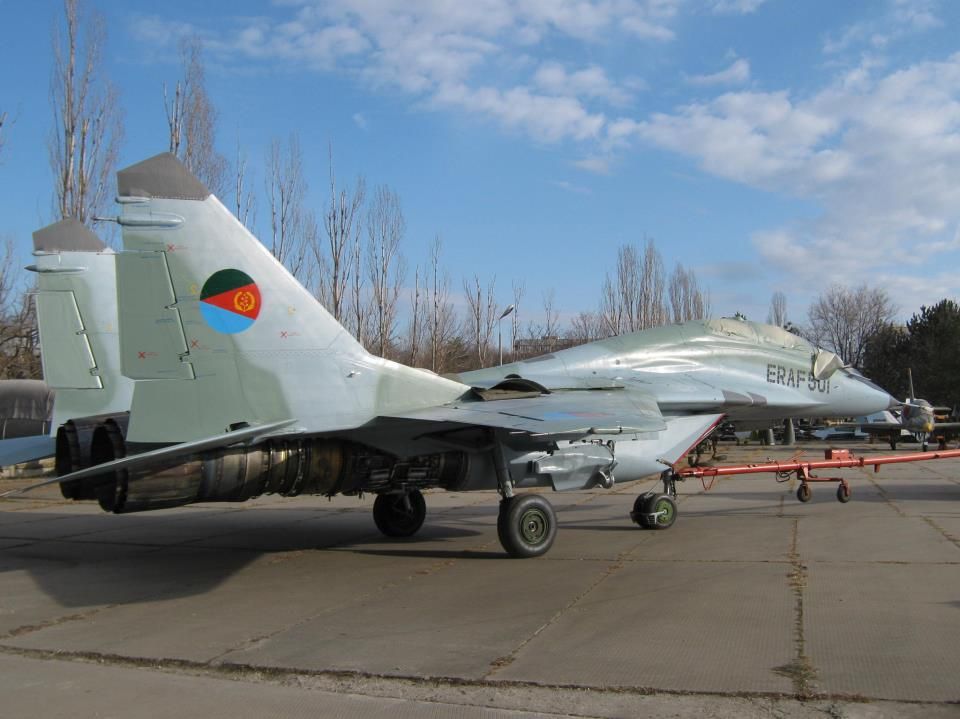 The ground conditions during the war of Ethiopia and Eritrea rapidly changed every day. The success of an initial offensive was replaced by a halt, and then a forced regrouping of the shock and defensive ground forces.

With the low effectiveness of ground-based radars to detect the enemy at low altitudes in mountainous terrain, to cover their troops from the air, aviation had to constantly be on duty in the air, which inevitably consumed a resource of vehicles and scarce fuel.

In the early days, they often tried to launch “sparks”, to “fly in” more pilots, to better familiarize them with the flight area and some misinformation of the enemy.

The enemy raised its aircraft more than once, but tried not to approach the areas of possible launches of the Su-27 guided missiles.

The advantage of the Su-27 in the allowable launch time of missiles of the R-27 type with the Su-27 and MiG-29 during a mutual attack on the opposite courses was reduced to only a 1-2 second difference instead of the expected 7-10 second. And that turned out to be decisive in the later stages.

A Su-27, with a number of 54, performing scheduled duty in the air, was sent out to intercept a MiG-29 pair, clearly about to storm the Ethiopian ground forces.

Considering the experience of the comrades and clearly following the instructions of the guidance officer, the pilot accurately went into the allowed launch zone, correctly maintained the regime, and launched two R-27s just in time, on the leading warplane of the pair, piloted by the Eritrean pilot Samuel.

As a result, the first MiG-29 was shot down, immediately collapsing in the air, the pilot died, and the second, returned to its territory, not completing the mission. The victory was confirmed by ground observers.

The next day, the enemy decided to “ambush” Su-27 while it’s in the air and towards the end of its rounds sent another pair of MiG-29 towards the Ethiopian capital.

The ground control center noticed the target at high altitude and immediately began pointing at it the Su-27 with hull number 58.

Everything happened almost like in a training exercise, until the moment the ground control point found yet another Eritrean MiG-29, flying on low altitude and suddenly began aiming on the Su-27.

The Ethiopian pilot managed to shoot a pair of R-27 missiles a split second before the MiG-29s could do that and downed one of the plans, Eritrean pilot Jonas died, and the other warplane turned around and returned to its base.

Due to the small amount of fuel, the Su-27 was also supposed to return to its base. After landing, the warplane had approximately two hundred kilograms of kerosene in the tanks, which is less than half of the allowed emergency balance.

A thorough analysis of this battle showed that the Su-27 pilot was not shot down only because he fully realized the advantage of this machine, which has a slightly larger permitted launch range and, in this case, higher speed.

This air battle was recorded on videotape by a front-line Ethiopian correspondent.

A few days later this video was broadcast on local television, which contributed to raising the fighting spirit of the troops and the prestige of Sukhoi aircraft.

Su-27 was recognized as the eldest in the family of Ethiopian combat aircraft. Thanks to the effective use of the Su-27, absolute air supremacy was won.

Throughout the war, the use of Eritrean aviation has never been used either to bombard enemy troops, the territory of the country, or to influence other types of aviation.

And the Ethiopian Air Force shot down three Eritrean MiG-29s in air battles (another MiG may have been decommissioned due to damage), without incurring losses.

Opinions of aviation experts regarding the comparison and juxtaposition of the MiG-29 and Su-27 are very mixed. This is not surprising, since these machines are too different for direct comparison and have a different range of tasks. However, a comparative analysis of the performance characteristics, as well as practical (training) air battles show the complete superiority of the Su-27.

It seems the author mixed up a lot of aircraft types. It’s totally confusing. Interesting topic though. The language leaves a lot to be desired.

And to think the Saudi’s still don’t want women to drive.