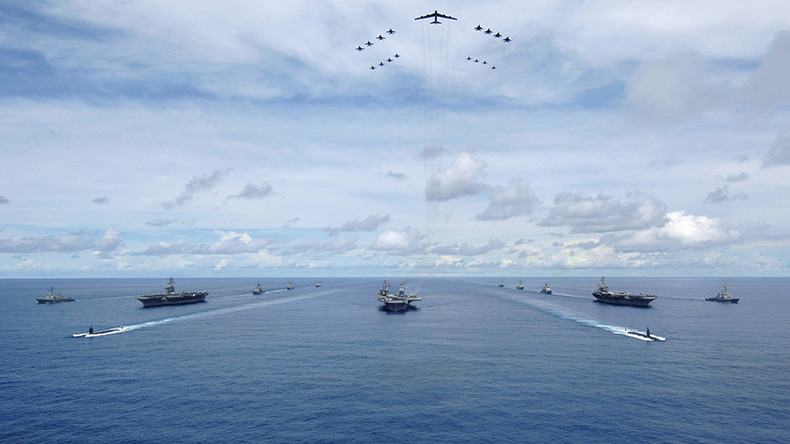 The US military has officially confirmed that its three aircraft carrier strike groups will hold joint drills in the Western Pacific for the first time in a decade.

According to the US NAvy, the USS Ronald Reagan, USS Nimitz and USS Theodore Roosevelt strike groups will conduct air defense drills, sea surveillance, replenishments at sea and other training in a period between November 11 and November 14.

“Units assigned to the strike force will conduct coordinated operations in international waters in order to demonstrate the U.S. Navy’s unique capability to operate multiple carrier strike groups as a coordinated strike force effort,” the US Navy’s statement says besides general claims about “security” and “stability” in the region.

The previous time when three carrier strike groups operated together was during exercises Valiant Shield 2006 and 2007, which were off the coast of Guam.

The exercise will take place amid as the US President continues his 11-day Asia tour. During the tour, Donald Trump aims to show that his administartion has an idea how to deal with North Korea and its nuclear and missile programs. Unfortunately for Trump, many experts and observers believe that Washington has little to do over the issue if it does not implement “military means” on Pyongyang. Such a complicated situation contributes to the growing instability in the region.

The neocons talk about NK like it is an isolated issue separate from the rest of the area. While ignoring statements by China that it would support NK in a war. China, or Russia for that matter, don’t want a Jew world order Jewmerica/NATO proxy state on their border to be used for regime change against them. When they don’t have that problem with the current NK government.

With a few reformed Jews as exceptions ,I agree Richard.

Is there such a thing in other than name only? As far as I know they still use the Talmud as their primary text. It just looks like the name reform is a diversion.

“This shift was not accompanied by a distinct new doctrine or by the abandonment of the former, but rather with ambiguity.”

It looks like the same baby rapers with a new name.

Great comments. Again remember 100% of Jews are not racist supremacists its about 90%. Racist supremacist Jews hate historical facts and ban them. Don’t forget Lincoln is the most hated figure in human history after Jesus by racist supremacist Jews. Any white person who defends the confederacy is a stupid, useful, animal, beast, stooge, patsy taking the wrap for the Jewish run slave trade as racist supremacist Jews say, because the South economically and politically, the slave trade, banks financial system, courts, military, etc. the government, was totally run by racist supremacist Jews as the entire USSA now is. today.https://uploads.disquscdn.com/images/12392db1db04b55b084d87cd907e2e19a7e25e74adf7ff532c7a676d87de65da.png Jews were so influential in those colonies that slave auctions scheduled to take place on Jewish holidays often were postponed, according to Marc Lee Raphael, a professor of Judaic studies at the College of William & Mary. http://www.jta.org/2013/12/26/news-opinion/world/dutch-rabbi-confronts-jews-with-ancestors-complicity-in-slavery Judah Philip Benjamin who served as the Attorney General, Secretary of War, and Secretary of State for the Confederacy. The first Jewish-American to serve on an executive cabinet in American history, he has received the title “brains of the Confederacy. One might say Jefferson Davis was the stooge puppet of Judah as Judah ran the military, the courts and international relations and THE security services for the confederacy, the first Mossad. See below Judah’s face was on the $2.00 confederate dollar bill. https://www.youtube.com/watch?v=sqzDSrR4L4w http://www.jewishvirtuallibrary.org/judah-benjamin http://www.jewish-american-society-for-historic-preservation.org/images/Judah_Benjamin_Article_-.pdf https://www.google.ca/url?sa=t&rct=j&q=&esrc=s&source=web&cd=2&cad=rja&uact=8&ved=0ahUKEwjhiMWC7rvUAhVnxoMKHVCKAwUQFggqMAE&url=https%3A%2F%2Fwww.civilwar.org%2Flearn%2Fbiographies%2Fjudah-phillip-benjamin&usg=AFQjCNHaG0unm6egkHM_UNuomRGGztmsLQ&sig2=Papy7_D1THDWDNgLQNUg6A https://uploads.disquscdn.com/images/c8e15744174a9b934ed8f9eb62418436bfb92fe3b773423a4bad9151a2431e83.jpg

The cafeteria Jews who pick and chose what evil cult teachings that they want to ignore aren’t the issue. The issue is the cult itself that needs to be outlawed to free humanity from it’s evil and create a better future without it.

This rudeness is really going to impress China I am sure :) Diplomacy US style. ‘ If you will not do exactly as we demand we will kill you ‘. Sadly for the US plebs in power, Reality is not always what the US wishes for.

If N. Korea doesn’t give up their nukes what does this accomplish other than being the most expensive babysitting service on the planet?