Early morning of July 10, local sources in Daraa reported two loud explosions in the town of Dael in the governorate’s northern countryside.

The first explosion was caused by an improvised explosive device (IED) which had been planted in the southern district of Dael. The explosion caused no losses. However, a second IED blew up when a unit of the Syrian intelligence had arrived to inspect the area.

According to the London-based Syrian Observatory for Human Rights (SOHR), an officer of the Air Force Intelligence Directorate (AFID) was killed in the secondary blast. Two other officers were injured. 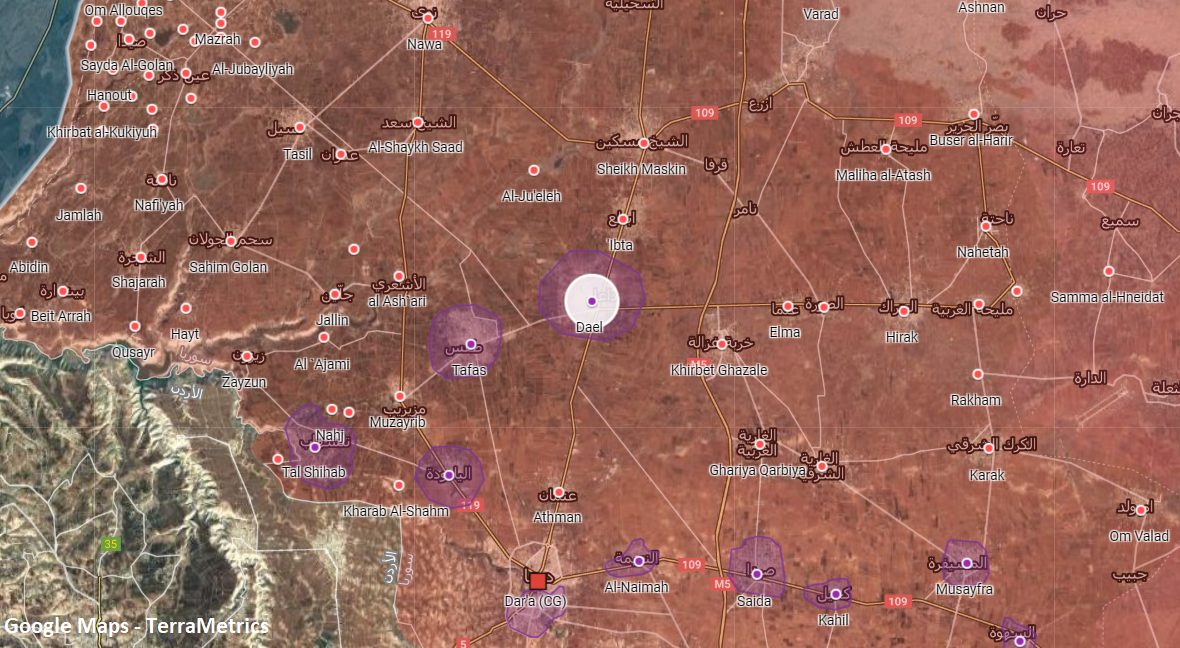 No group has yet claimed responsibility for the  IED attacks. Nevertheless, ISIS cells are known to be active in northern Daraa.

In the last few months, several officers of the AFID and other Syrian intelligence agencies were killed in the northern and eastern regions of Daraa governorate. ISIS claimed responsibility for some of the attacks.

The recent attacks against government forces and local fighters in Daraa and al-Quneitra are intendent to disrupt security in Syria’s southern region. Decisive action has yet to be taken to address this growing threat.

It is beyond belief that the Americunt illegal occupation cunts who are arming these headchoppers are not being hit by IED’s, when will the Syrians ever going to fight back?

You are right,i don’t know the reason,there should be IED attacks every day,the only thing to fear is fear itself.

Never it seems, Putin does not approve.

Patience, something is about to happen. Just patience.

The most likely suspects are the Russian backed ex 5th corps soldiers who defected from the SAA a few weeks ago, they have a huge axe to grind with the pro Iranian Air Force Intelligence personnel, and even though there’s no proof they’re behind the attack, they’re the most obvious candidates. It may be hard to find media reports concerning previous clashes between the Russian backed 4th and 5th corps SAA and Sunni NDF when they’ve fought against Hezbollah and local Shia NDF that Iran supports, but there have been quite a few incidents. In 2017 to 2018 there were many clashes in Deir ez Zor, one of them resulting in hundreds of casualties, 2018 to 2019 several more minor clashes in western Aleppo, and now in Darra, Quneitra, and As Suwayda the process is starting to repeat again, and Iranian influence versus Sunni nationalism is the instigator of all the disputes. Assad seems to be putting all his eggs in the Iranian basket and one by one taking them out of the Russian basket, which is making it much easier for someone with ill intentions to easily smack the egg basket out of Assad’s hands. I think Assad’s making a big mistake now, he’s forgetting that Russia does more to defend Syria than just supply soldiers and equipment, it’s their political clout that does more to help Syria than anything else, Iran can’t fulfil that role for Syria.