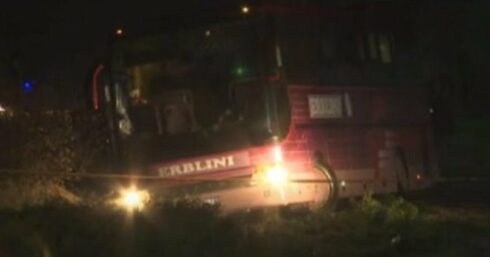 On November 26, a  gunman opened fire on a bus carrying students in western Kosovo. As a result of the attack,  three people were killed and another one was injured.

The bus came under attack in the village of Gllogjan, west of the capital Pristina. A masked gunman fired a Kalashnikov automatic rifle at the bus.

The driver of the bus died on the spot, and three teenagers were taken to the nearest hospital. Two of them, aged 17 and 19, died from the wounds. The third injured teenager is in the hospital, his condition was described as stable.

According to the Kosovo media, the bus was carrying students of Albanian nationality.

The local Kurir newspaper reported that the young man who shot the bus, killing three people, carried out a revenge attack.

He reportedly hit on girls in the school bus. He was punished by the driver and the conductor, who forced him to leave the bus. In response, the young man took a gun and waited until the bus went back on the same road, having shot it at point-blank range.

The killer managed to flee the scene, the police are reportedly still looking for him.

The local officials are yet to comment on the motives of the attack.

“There is no reason to believe it was a terrorist act,” Veton Elshani, deputy police head in Peja, claimed.

There are rumors that the attack may be linked to the growing tensions between Kosovo and Serbia. However, they are yet to be justified.

Following the incident, the Kosovo Interior Minister Xhelal Svecla cut short his visit to neighboring Albania and headed to Gllogjan.

Meanwhile, the governments of Kosovo and Albania held the seventh joint meeting in the Albanian city of Elbasan, the Kossev portal reported on November 27. It resulted in signing of 13 agreements for rapprochement, including infrastructure projects, such as the construction of the Durres-Pristina railway, as well as facilitating the movement of goods between the countries.

On November 21, Kosovo’s Prime Minister Albin Kurti clarified that Kosovo had declared independence from Serbia, but not from Albania, adding that in a future referendum he would vote for the unification of Albania and Kosovo. In his turn, Albanian Prime Minister Edi Rama said that he would vote in the referendum for the unification of Kosovo and Albania, regardless of when it might be held.

The Kosovo’s intentions provoke a negative reaction from Serbian officials. Thus, Serbian Prime Minister Ana Brnabic called on the EU’s officials to react to these statements.

The Western Balkans are heating up, as tensions between Kosovo and Serbia are escalating rapidly in recent months. The most recently, in October, one Serb was shot and six police officers injured when police fired tear gas to disperse a crowd that became hostile after raids on suspected smugglers in a volatile area of Kosovo populated by the Serb minority.

Albanian animals killing each other for some tribal grudges.

Whatever!!! In any case, the Serbian Army has just confirmed that they will be getting Kornet-E anti-tank missles from Russia soon. Serbia, on its own right, has been quietly and diligently upgrading its military complex to impressive levels the last few years since they are fully aware of what the Zionist Anglo-American plans are for the region including Kosovo. This time around though, Russia doesn’t have a drunken Cia assett as president who licked dicks for Kosher Nostra.

This is such a nonsense. No unification will happens.