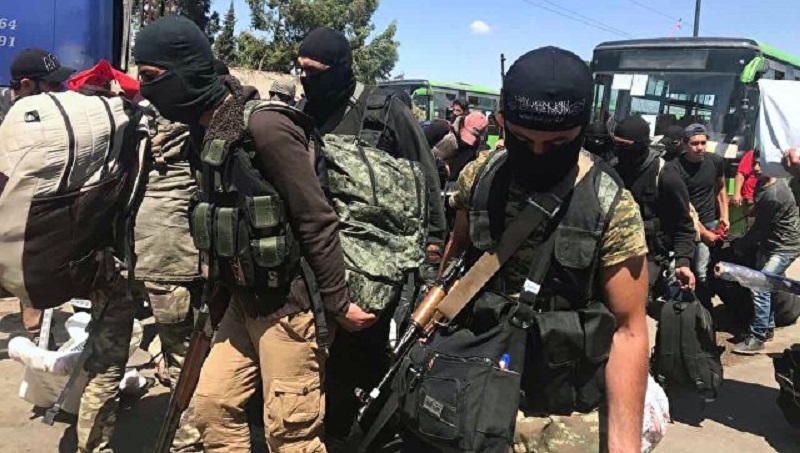 Over 10,000 militants in the provinces of Homs, Hama and Idlib are ready to negotiate with Russia ways to cooperate against Hayat Tahrir al-Sham (formerly Jabhat al-Nusra, the Syrian branch of al-Qaeda), the Russian state-run news agency RIA Novosti reported citing Saleh Naimi, the head of the National Council for Peace and Reconciliation in Syria.

According to the report, the opposition members are ready to fight Hayat Tahrir al-Sham if they are direclty supported by Russia. Naimi said that the number of militants that are ready to participate in the effort exceeds 10,000.

“Under our guidance they (the militants) has established a coordinating political Committee,” he said adding that the established council has a desiere to hold a meeting in Ankara between the armed opposition and the Russian side.

He also added that the same militants and commanders are ready to participate in the “liberation of Deir Ezzor”. However, this statement looks very questionable.

If the report is confirmed, it will likely mark another round of cooepration between Turkey and Russia over the conflict. It’s easy to note that Turkey has a large influence on militant groups operating in Idlib, Hama and Homs. In this case, any cooperation against Hayat Tahrir al-Sham will contribute to growing Ankara’s influence in these areas.

https://sputniknews.com/politics/201707181055637932-donetsk-malorossiya-ukraine/ Lol NATO and their Nazi buddies in Kiev will not be happy, i can see juncker reaching for the bottle.

As for the story, just vet them properly no rush sort of thing, would be a good deal if pulled off, maybe they see uncle sam a.k.a John McCains words were as worthless as him

Very easy predict what will happen next

‘Nazi’ is short for Ashkenazi. A Turkish tribe claiming to be Jews, they then invaded the indigenous European Japetic tribal lands, then after that Palestine. But all the Ashkenazi’s should go back to Shemitic-Turkey where they came from. https://www.youtube.com/watch?v=GHXQFt4dySY

One should indeed be very happy to be supported by, likely, the islamo fascists of Ahrar al Sham, the trusted mercenaries of the turks.

As soon as Russia and or Assad turns, they will turn on the SAA, their favorite enemy.

Agreed ; if they are sent anywhere , it would be north into Idlib , if nothing else , they can take out Al Qaeda . A careful vetting indeed .

They would have to send them to fight against ISIS/HTS/Al Qaeda since ISIS raised the flag in Idlib and this could be Turkish land grab again , but they have to go through SDF territory to get there .

Turkey will sort out a deal with Russia and Syria! Turkey wants the influence in this area and it can’t if US back HTS (yes they are backed by USA) are competing with them! But better that AAS and HTS are at each others throats! I imagine the intel that can be given would be sweet pickings for Russian bombers!

They, Ahrar al Sham, can´t be trusted in any way or form. Puting them side by side with SAA would put the enemy inside Syrian territory. The only rational offer would be for them to ask for USA to attack HTS by air. If these Mercenaries want to attack HTS from Turkey is their problem and Syria will have a win win situation on this. But must be USA attacking HTS while SAA allies keep protecting Syrian Army.

The butty of winning the war is that in the final stages of the war many will jump on the winning wagon and in Syria will not be different. The constant advances by the SAA forces will make many militant to switch sides and join SAA

Indeed all sorts of deal being hatched at this point. Its important to be on the winning side. Treachery and double dealing fills the air.

a victory of Russian diplomacy….and military.its obvious that the militants can see that their end is near. totally isolated, no more funding etc. they are trying to save their lives and establish a role after the war is over. lets see if they are good for their word. one must notice that there is a very dark war of diplomacy going on in Syria as well.