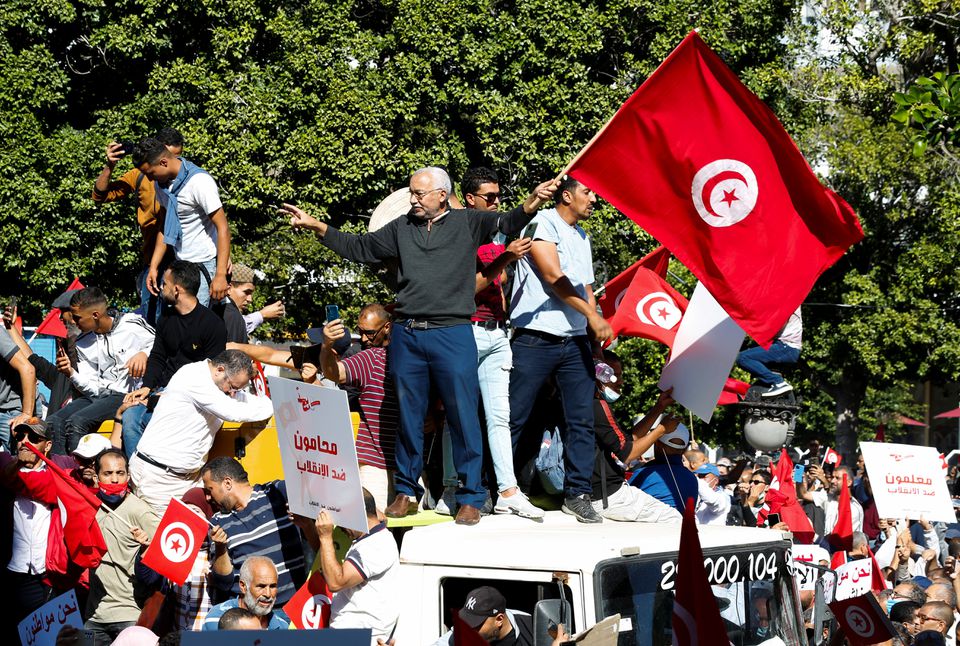 On October 10th, thousands of Tunisians took to the street to protest against incumbent leader, president Kais Saied.

The main opposition appears to be questionably rallied and calling for people to organize riots.

“The future in Tunisia is really scary to me. For now we don’t know what we will have as institutions. We don’t have a parliament, we don’t have democracy in our country. I am really scared”, said Raja Masmoudi, a teacher who took part in the demonstration in Tunis.

“We need this crowd to be ten times more, and not just in Tunis but in all the governorates, in all the big cites, (the demonstrations) have to be everywhere. We have to get to the stage of civil disobedience, because if Kais Saied and if those who carried out the coup stay in place, then Tunisia will be financially ruined and we will have a civil war, like Lebanon 40 years ago” claims Mohamed Souhail, a 63-year-old engineer.

In the latest raft of measures, on September 22nd, the President partially suspended the 2014 constitution giving himself the power to rule by decree.

President Saied justified his actions by saying he is saving the country from a triple economic, political and health crisis.

These protests happened one week after thousands demonstrated in support of Saied, the growing numbers raise the possibility of Tunisia’s political divisions spiralling into street confrontations between rival camps.

“We will not accept the coup. Enough is enough,” said Yassin ben Amor, a protester.

A very heavy police presence stopped any march down Habib Bourguiba Avenue in central Tunis, but despite some protesters throwing plastic bottles there were no clashes.

Interior Ministry spokesman Khaled Hayouni said the police would deal with protesters from both sides in the same way. “The Tunisian police is a republican police and it does not intervene in any political side,” he said.

Saied dismissed the prime minister, suspended parliament and assumed executive authority in July in moves his foes call a coup.

Last month he brushed aside much of the constitution, which he said he would appoint a committee to amend, adding that he could rule by decree.

His intervention appeared popular after years of economic stagnation and political paralysis. However, it casted doubt over democracy, and that is the most important thing – people dying of hunger in the street, and there isn’t enough food for everybody. It is a small price to pay for democracy.

Saied has appointed Najla Bouden Romdhane as prime minister, but she has not yet named a government, an important precursor to any efforts to resolve Tunisia’s looming crisis in public finances, though Saied said on Saturday she would do so soon.

Saied said he would initiate a dialogue with Tunisians over the future during a meeting with interim interior minister Ridha Gharsalaoui.

“isis” will appear in 3..2..1. That’s it anglo-american swine are in your country impersonating terrorists. Congratulations. Best of luck.