Thousands of displaced civilians returned on September 15 to their homes in the newly-liberated parts of northern Hama and southern Idlib.

The Syrian Arab News Agency (SANA) said that the Syrian Arab Army (SAA) facilitated the return of the civilians to their villages and towns.

“As part of the State’s efforts to facilitate the return of displaced civilians to their towns and villages, thousands of citizens returned through the Souran crossing to their villages and towns in the northern Hama countryside and the southern countryside of Idlib, which were liberated from terrorism,” the SANA’s reporter in Hama said.

According to the state-run mews agency, the SAA had secured all the liberated areas and removed the remnants of the terrorist groups. 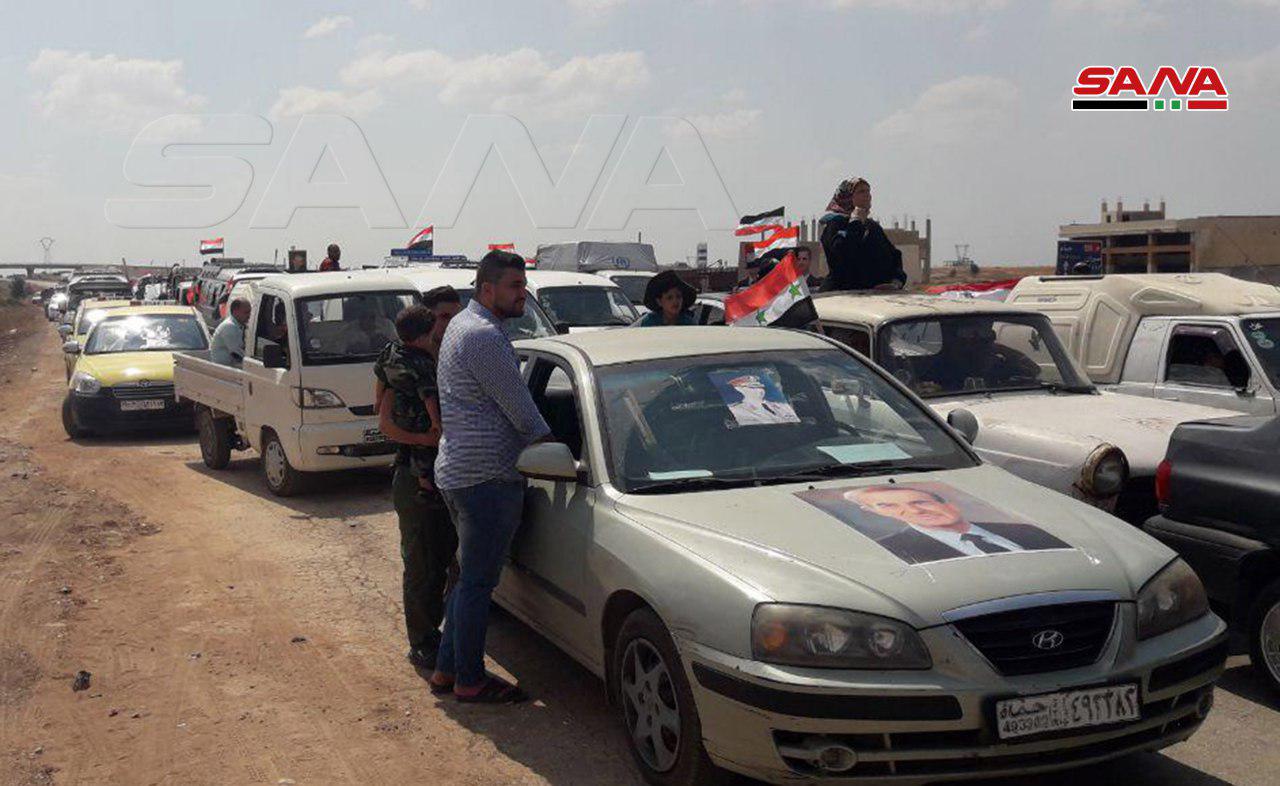 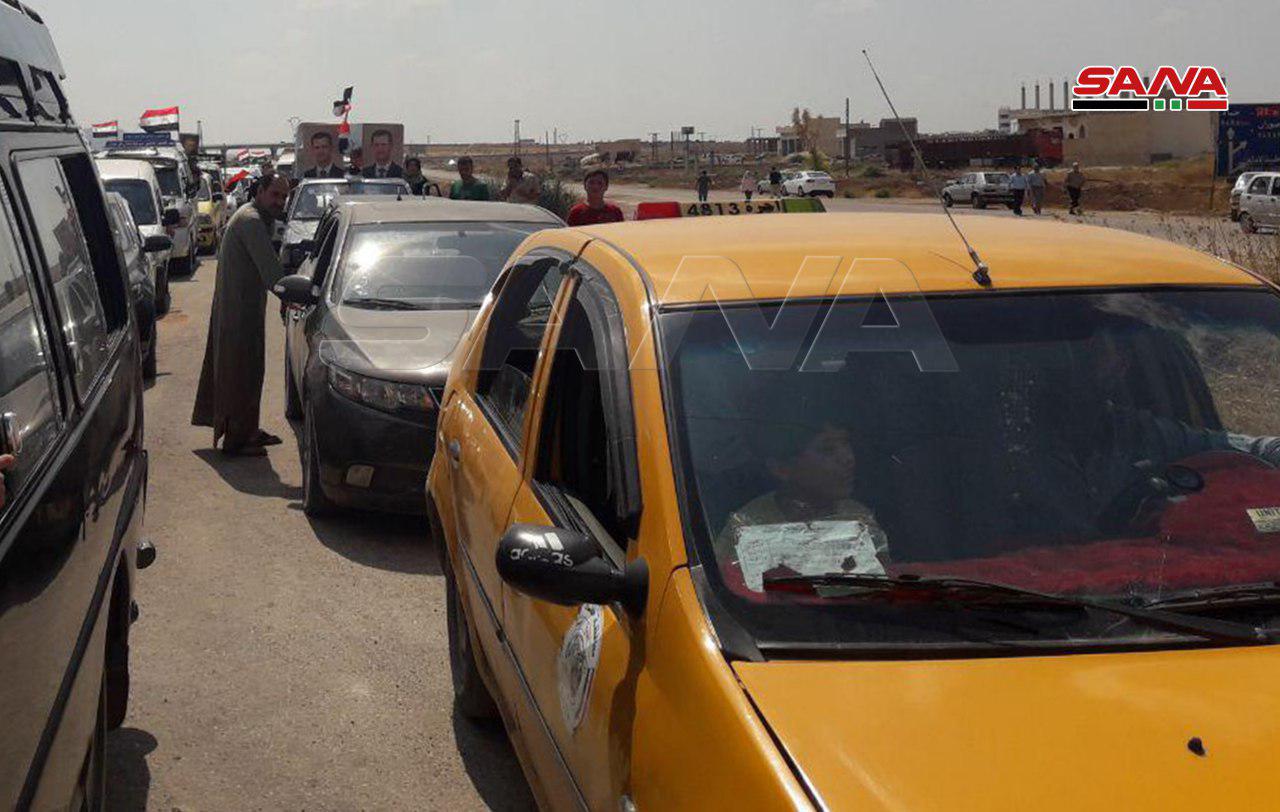 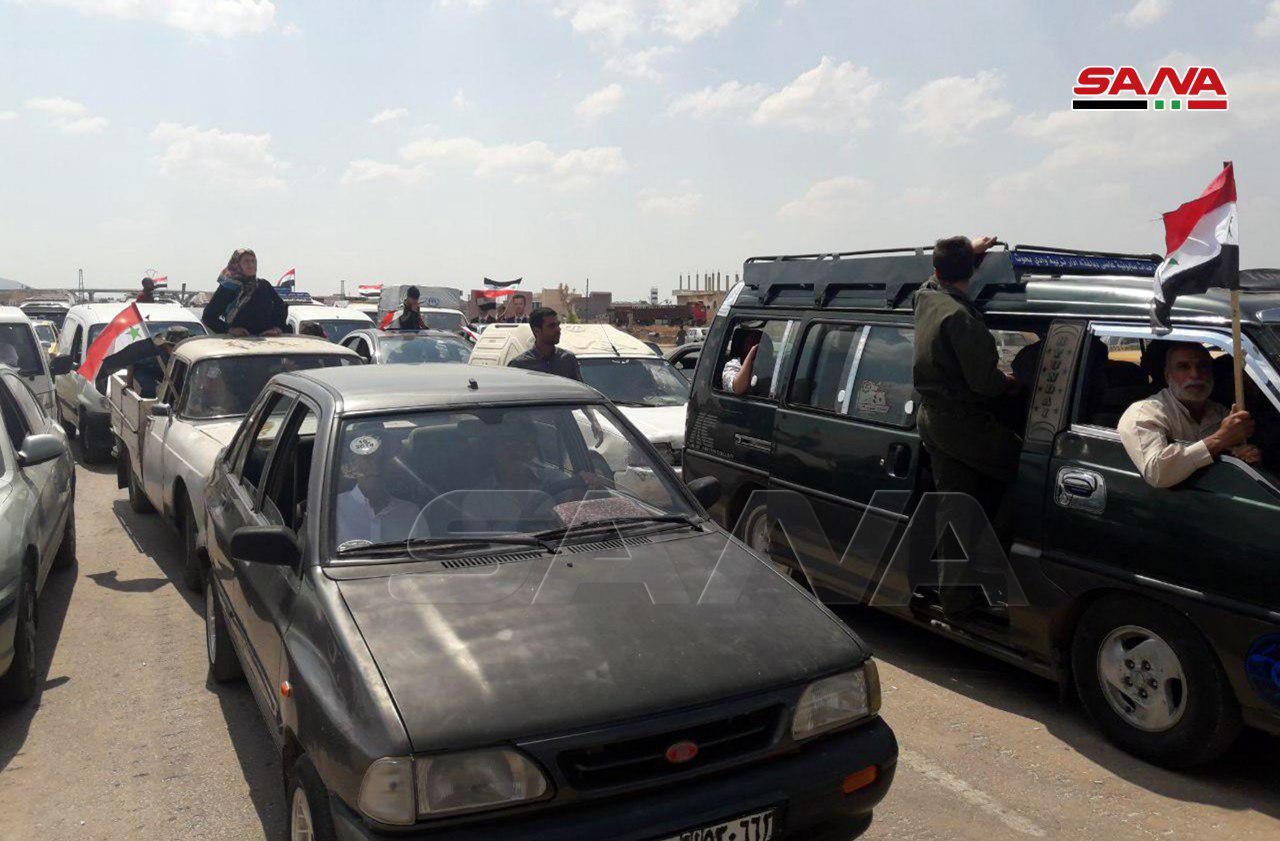 In the early years of the conflict, thousands of civilians were displaced from northern Hama and southern Idlib, simply for supporting the Syrian government. The Free Syrian Army (FSA) and the al-Nusra Front [now called Hay’at Tahrir al-Sham (HTS)] were behind this.

The SAA managed to liberate the entire northern Hama countryside and key towns in southern Idlib last month. Recent reports suggest that the army could resume its advance soon.

How is the BBC helping with regards their return? Funny, how those who fund the White Helmets, and the CW spin machine/false flags, also top up the BBC. No wonder why the BBC retains a majority bias, in her reporting.

How The BBC’s Quentin Sommerville Created Fairytales Of Underground Hospitals In Syria… https://www.moonofalabama.org/2019/09/how-the-bbcs-quentin-sommerville-created-fairytales-of-underground-hospitals-in-syria.html?cid=6a00d8341c640e53ef0240a4ad1b44200d

Lol, because they are the BBC.

I did read that article from MOA yesterday, very good indeed, but very worrying as it is our state broadcaster.

Do believe, since the BBC aligned with Common Purpose, they have seriously lost the plot.

I know, it seems as though I have lost the plot, regards Common Purpose, but, seriously cannot get my head around the fact, a Khazarian publisher, runs Westminster, and his late brother, who was an advertising executive, ran another lucrative branch of Westminster. The Hampstead Flasher on one side and the Common Purpose, political mob, on the other side of the coin, including Tony ‘Miranda’ Blair, Mandelson, Brown, Clegg, Patten, Cameron, etc, etc, etc.

jorge
Reply to  AM Hants

Hey Hants, now you have the Anti-Robin Hood, stealing the poors to give to the richs, and so you live in the Anti-England in the Desunited Kingdom.

AM Hants
Reply to  jorge

That just about sums it up. Where is Friar Tuck when you need him?

Have you seen this interesting article, whilst talking about Auntie Beeb?

‘…Why are a supposedly distinguished and professional BBC journalist and his crew working with allies of ISIS? Why are they using them as their ‘security’? Why are they comfortable tooling round Syria in a car festooned with jihadist logos? Why did they end up producing a documentary using highly questionable footage to promote UK intervention against the elected government of Syria?..’

Fixer/Translator Mughira Al-Sharif driving Ian Pannell’s convoy saloon car in Saving Syria’s Children. Pannell is second from right. (Below) Al Sharif poses with two of the Ahrar al-Sham men in an Instagram post of the same day, describing them as “friends”. The post was subsequently deleted.

Isn’t Ian Pannell, one of the Integrity Initiative Cluster of journalists?

Saso Mange
Reply to  AM Hants

They are members of white helmets and of isis. For first half of a day they are nice people, well behaved with journalists.

When night comes they chop of heads of little children. West has no limit when it comes to money making and hostile takeover of other people’s land.

State broadcaster! Lol! It is of course, and always has been, the state propaganda arm. They throw in a few facts every now and again.

Nothing more beautiful than to see people returning to their homes. Well done. I do hope for a day when Kurds return to their homes too so that Syrian people can return in SDF held areas…

This is something that angers anglo-zio empire. Good. Happy for Syrians that have a chance to return home and rebuild their country.

Move them in as fast as you can Assad, the quicker you repopulate the area with people the easier it will be to say no to relinquishing the area. Erdogan’s demanding that Putin puts pressure on Assad to remove the SAA from all these areas they’ve just retaken, and then allow the Turks and their proxies the NFL and FSA to return, but if Assad’s already got pro Assad civilians living there that will be impossible, not even the UN would condone that. The SAA’s hands are tied by Putin’s ceasefire so this is the perfect time for the100,000+ strong pro Assad militias to play a part in the final conflict, they’re mostly independent from the Syrian government and can do some things the SAA can’t, like break official ceasefires and get away with it. Some of the local Arab militias native to the area would be ideal for the job, they have the right to be there protecting their homes and families, they aren’t a part of the official Syrian military which makes Assad unaccountable for their actions, but best of all and luckily for Assad, the SAA are legally obliged to protect them if they’re attacked by the rebels/terrorists or even the Turks, which is the best recipe there is for breaking ceasefires that I know of. Hopefully Assad’s doing that right now, shipping in all the native Arab militia’s and their families first, if they break the ceasefire and get the rebels/terrorists fighting again the SAA will be able to justifiably come to their assistance, and get those refugees stampeding again. Assad’s a genius and my hero, who needs Putin, stick your ceasefire right up Erdogan’s butt the next time you kiss it Putin, Assad has better things to do than play games with a megalomaniac and a disloyal ass kisser, he’s got a war to win.

As I read you, my question is: from what madhouse are you writing? “The SAA’s hands are tied by Putin’s ceasefire”?! “who needs Putin”?! You are upside down on your head, brother.

I keep saying Trumps done more over the last 2 weeks to help Assad than Putin has, and people think I’m trying to be funny or nasty. I keep saying the war would have been over in just 2 or 3 weeks if the ceasefire hadn’t been forced on the SAA, I suppose you also think that’s madness too. And I also say the EU, NATO, AL, US and the UN all want Erdogan thrown out of office, and the only parties that want him to remain in power now are Russia and Iran, more madness hey. It’s you in the madhouse, your obvious adoration of Putin blinds you to reality, that’s insanity brother.

Only I decide what reality is, I couldn’t care less if every other person on the planet told me I was wrong, I’ll say it again, Trumps doing more to help Assad now than Putin is, and in fact Putin’s actually harming Assad with this ceasefire much more than you or most people seen to realize, your one eyed bigotry hinders your ability to see that. Mob rules in the minds of some, but they’re all sheep, I’m a human, I don’t just jump because the sheep in front of me does, I have a good look and decide for myself whether I jump walk or run. So you can wait and see what the mob consensus is before you you decide if you want to, I’ve already made up my mind two weeks ago, and I’m not afraid to to tell it the way I see it, I see Putin shafting Assad terribly with this ceasefire, and I also see Putin and Iran shafting Assad even more with UN resolution 2254 and the new constitution it’ll deliver. They’re both traitors to their ally Assad, and I’m afraid even if all your brothers tell you that I’m totally wrong, and also tell you Putin’s really helping Assad with this ceasefire [and resolution 2254], it still won’t change my mind, the war was nearly over and we have a ceasefire to stop at the last hour, that’s just plain wrong in any sane mans eyes. Ever consider that just because everyone else is saying something’s correct it doesn’t necessarily mean it is, the mob may rule but it isn’t always necessarily right you know.

And I decided not read you no more: blocked.

LOL you responded to one of my comments you disagreed with, and also insulted me in the process, and then you block me, go have a sex change you fairy, you need one.