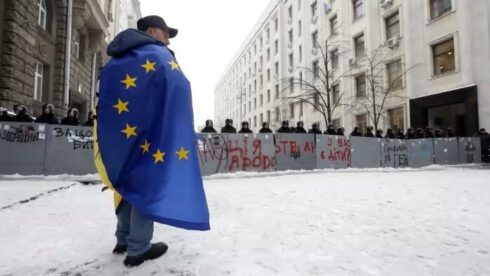 Anyone with any sense could have seen it coming – Europe is on the precipice of an economic and social crisis not seen since World War II; and they basically did it to themselves.  Ever since the Russian invasion of Ukraine and the subsequent NATO sanctions, the talking heads in the mainstream media have consistently fed the public an endless narrative on how the EU doesn’t need Russian natural gas.  We’ve heard an array of theories and chest beating from corporate journalists and lying politicians; all of them sounding so certain that Russia would be isolated and economically destroyed within no time.  This has not happened, and now the reverse might soon be true for the EU and the UK.

To give you a sense of the disinformation being peddled to the public on this issue, take a look at the 10 point “battle plan” put together by the International Energy Agency (IEA) back in March to cut off Russian energy imports and save the EU from a crisis:

2)  Replace Russian gas supplies with alternative sources.  (REALITY:  No alternative sources exist that can come close to filling Europe’s energy needs and that can be as easily transported.  Europe will have to draw on energy commodities from around the world, taking up a large piece of a shrinking pie and driving up prices for most nations on the planet in the process.)

3)  Introduce minimum gas storage rules.  (REALITY:  This assumes there will be gas to store for later.)

4)  Accelerate the deployment of new wind and solar projects.  (REALITY:  Anti-carbon fantasy land not based in science.  There is no green energy in existence which has the ability to heat European homes and fuel their industry except nuclear, and EU governments have consistently been hostile to nuclear projects.)

5)  Maximize gas power from bio-energy and nuclear.  (REALITY:  The more bio-energy you develop the less farmland you have available for food.  And, nuclear power plants take years to build and EU governments continue to fight them.  If the EU had took some of the billions they use annually on useless green technology and anti-carbon programs and spent that money on nuclear plants 5 years ago, they would not be in the mess they are in today.)

6)  Enact short term tax measures on windfall energy profits – Cut energy bills when gas prices are high.  (REALITY:  You cannot enact greater taxes on energy producers and cut energy bills simultaneously without government price controls.  And, price controls lead to less supply anyway.  The more you tax energy producers the more the power bills are going to go up to compensate.  There is no way around this.)

7)  Speed up replacements of gas boilers and heat pumps.  (REALITY:  Before winter?  Not a chance.  This should have been done a couple years ago.  Also, it should be noted that the IEA zero-carbon agenda has called for gas boilers to be eliminated by 2025.  Rather convenient that the energy crisis is expediting their green energy goals, don’t you think?)

8)  Accelerate energy efficiency improvements in buildings and industry.  (REALITY:  Who is going to pay for this?)

9)  Encourage a temporary thermostat reduction of 1 °C by consumers.  (REALITY:  This opens the door to “smart meters” which power companies or governments can control without your consent.)

10)  Step up efforts to diversify and decarbonise sources of power system flexibility.  (REALITY:  More green energy, which has proven time and time again to be a completely ineffective replacement for carbon based fuels.)

The IEA is an institution that is hostile to carbon based energy and industries and calls for the end of all carbon emissions by 2050.  This is why none of their bullet points from March that have been attempted have worked; because they aren’t designed to work, only promote further carbon controls while harming global power generation in the process.

There are currently no practical replacements for oil, coal and natural gas; none.  Especially not in a reasonable time frame that would spare Europeans from a full blown disaster.  The only way green technology would be able to provide enough energy for the world’s populations would be if the human population was greatly reduced.  Europe’s energy crisis actually helps the IEA agenda, just as it helps the UN and WEF climate agendas.  But what about all the people that will suffer in the meantime?

Expect to see extensive energy rationing this winter in the EU.  Around 80% of all EU natural gas is imported and Russia’s natural gas exports make up around 40% of Europe’s heating and electricity.  With Russia now reducing exports down to 20% of their original levels, there is zero chance that the EU will be able to maintain their normal energy usage.

Supply-side shortages will mean a price explosion going into winter as demand increases.  Prices have the potential to double (or more) by the beginning of 2023.

European governments will likely prioritize heating for public homes over energy for industry; they will do this to prevent civil unrest, as some government officials are already warning about.  There is a chance that EU industry will be hobbled as energy supplies are rerouted for public consumption.  We have seen something similar to this in China this year as their drought conditions worsen.

Civil unrest will probably happen anyway.  Climate restrictions, green energy rules on carbon emissions and other ludicrous measures are making it impossible for Europeans to adapt to crisis events.  Prices will be high, and price caps won’t help with supply shortages.  When people start to freeze, there will be anger and desperation.

The only legitimate short term solution to prevent a historic energy calamity in the EU this winter would be to remove sanctions on Russia.  But, NATO has made it clear that this will not happen.  So, the European people are being positioned to face the consequences while being told there will be no consequences.  And, when the pain starts to hit, they will be told that it’s all for the “greater good.”

Poles got what they wanted.

Poland is the last country usisng a lot of dirty coal. By that they still has many of the tools to regain old dirty days.

US has been planning to destroy Russia Ukraine EU and China even EU because EU is competitor of US trade.

German Green Party and all in the west – buy USA FRACKED – dirty – UK imports of it exported to the EU contain high levels of radioactive materials – Hydraulic used to obtain FRACKED gas leaving ground water contaminated with Cancerous chemicals giving local US citizens Cancer — and yes I have the figures if anybody doubts me.

STILL getting blocked by RE-captcha.

Absolutely can not wait for this Euro winter to kick off, I am not a religious man but I am praying for a record cold winter. Keep voting the way you do Europeans🤣🤣🤣🤣

I am waiting for a cold winter too. I want to go to sport outside for hours and see how the others live this in their homes.

We want to save the planet and nobody and nothing will stand in our way. We can do it.

Go ahead Numbskulls FREEZE! for the juice-anal democracy haha have fun lolol

Poletards will be be resorting to cannibalism by next Spring at this rate. Serves them right for being tools and idiots of the Anglo swine.

Do You see any reasons for, we and they should be nice to You.

The Angloswines are in turn tools of their Zionist masters. All of EU is.

⚡️⚡️⚡️Urgent. The battles for the city of Kherson have begun!

The Armed Forces of Ukraine break through to Kherson, the RF Armed Forces inflict accurate strikes on the accumulation of enemy equipment and infantry. The evacuation from New Kakhovka has begun!!

Hard shots of battles from the scene online – https://t.me/+BMFyQ3EiwRU4MTZi

I only will add thet poles are the last to use dirty coal. By that they have the capabilities to use them well.

I dont think any here in Europe/Russia is not europe) believe in 100% no oil, gas and coal. Realisme says we can reduce the consumption by using energy better. We also can change a lot to something better and cleaner.

Only the first comming winther will have big problems as build in. Soon the world economy will stabilize as well as we compensate better. Many has to pay for for warming up as well as production and service.

The Hedgepudinsky Barduski seemes to ignore the rest of the world are in same level of changes and problems. Its very impressing any can be that kind of large scale ignorant. Very much as Rsusai is a skinny elephant with 5 legs.

In the past I found jokes, depicting Polish people as stupid, to be unfair and offensive. Now it all makes sense. They couldn’t have picked anyone dumber, hence the Polish jokes.

Poles were used to fire up WWII, ending with 12 million dead and Sovier rule.

All Western governments are preparing a dark winter for their herds. Even outside the EU, they will invent pretexts to create breakdowns, shortages… The EU will be the first to go down with the blessing of the puppet masters.

Any excuse will do. All part of the Plan to destroy the economies of the world and depopulate to serve the globalist clowns . Useless murdering criminals.

African in the western hemisphere

For “the Greater Good” 😁 This ruling elite, European population must better Get rid of them quickly before they achieve their goals which are transhumanism, Control, slavery…