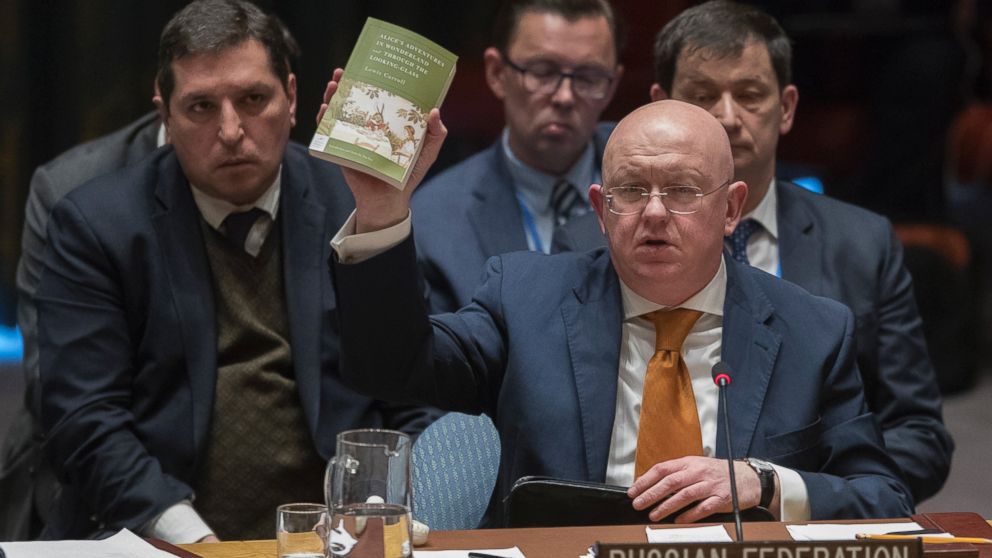 On April 5, the United Nations (UN) meeting took place to discuss the Salisbury case once again.

Moscow requested the meeting after British laboratory didn’t establish Russian origin in of the nerve agent “Novichok” used to poison Russian ex-spy Sergei Skripal and his daughter Yulia in the UK.

Vasily Nebenzya, Russian ambassador to the UN, stated that the British theory of reveal started to “fall apart”, mentioning British “anonymous” security sources that had allegedly confirmed a Russian origin of “Novichok” and the British refusal to conduct a joint investigation.

“I don’t even know how to comment on this. It’s some sort of the theater of absurd. You couldn’t have come up with better fake story?”, Nebenzia said.

“We want to state urbi et orbi, Novichok is not copyrighted by Russia.”

The British envoy Karen Pierce responded by supporting her government’s firm belief that there was “no plausible alternative explanation” and Moscow was “highly likely” involved in the poisoning the Salisbury incident and expressed constant “aggression” over the recent years.

“Russia seeks to undermine the international institutions which have kept us safe since the end of the Second World War”, Pierce concluded.

Pierce added that another quote from the same book, “believing six impossible things before breakfast,” suited her Russian counterpart better, though it matched her own government’s case built on assertions and rhetoric made in PowerPoint presentation.

Before this “absurd land” of Skripal case meeting, on April 5, Yulia Skripal made the first official statement to the media recorded by Victoria, Yulia’s cousin during the phone call:

“Everything is OK. He [Sergei Skripal] is sleeping now. Everyone’s health is normal… nothing irreversible happened.”

“I’m getting better each day”.

On April 6, the UK newspaper “Express” published Viktoria Skripal’s mind-blowing statement to the Russian media about her relatives poisoning. She said that Skripal may not have been poisoned by the “Novichok”. By contrast, she blamed the bad fish supper.

“Did they eat a dish that one cannot eat, or is it banned in England?, Victoria stressed.

The experts from the Organization for the Prohibition of Chemical Weapons (OPCW) paid a visit to Russia. The experts came to monitor compliance with the organization’s rules. It wasn’t clear whether the examination was connected to the case of Skripal’s poisoning. However, it is clearly that “mostly likely” it is.

The UK desperately trying to find some new confirmation of what appear to be a totally anti-Russian stance in the Skripal case.

On April 5, at the Moscow Conference on International Security Russian Foreign Minister Sergey Lavrov stated that the UK was mocking the international law and ethics unreasonably blaming Russia. It looks that the UK will really continue doing the same and further to encourage the “theater of absurd” afloat.

Yes she does appear to be a bit of a c*nt.

Without Germany the British French and US will be struggling to achieve a rapprochement of NATO countries to take up where they left off after Libya 2012.

You see an alliance there, Rodney?

May is on very thin ice seems desperately needing some jingoism to keep her rabbit coming out of her hat, Macron is getting heat from lefties, that won’t help his Global Neoconservative agenda.

Naturally then Trump will soon feel alone, I think he’s being mind controlled giving everything to his Deep State enemies just the same as Ovomit maybe even worse since Kerry knew not to take off his shirt for many well wishes to hold, Trump could be that stupid, but I think he’ll be impeached if Russia and China fire back so the war will be averted anyway.

So May has a bunny, not a pussy, you think. Trump no doubt IS that stupid. Once someone, or lots of someone buys you, they own you. Trump enslaved himself. That’s pretty stupid in my book. Can’t quite get your metaphor beginning: “…knew not to take off his shirt for many well wishers to hold…” Perhaps there is too much abstraction for my very materially substantial European mind.

I was never interested in Royalties private parts May always was, about Queen Elizabeth I actually had her picture staring down at me yesterday at the Berry Bowling Club, verily a great ride to get there, over the Cambewarra Mountain and frightening to be greeted by a disgusting person on the wall, still she’s right not to have pusseys as pets they murder the birds and lizards, I’d like to see her Palacial Mouce go up against one of my Goannas.

Trump is simple minded,gets “boxed” in, no hand for politics, I think he’s finished.

That’s funny I thought everyone reflected Kerry’s famous statement about not being willing to go into the Syria, he said, ” there is someone always willing to hold your shirt” meaning while I do the fighting everyone is cheering, maybe its not famous in New Mexico.

My son mastered the art of boxing because we took it as a sport, probably too late for Trump, anyhow my son keeps wanting to quit the Navy come here on the land and make a professional come back, I fight tooth and nail to keep him in the Navy and in West Australia, we humans love fighting but only some of us are good students.

Trump, Kerry and me have got something in common we likes to keep our shirts on, but probably Trump doesn’t know how.

I don’t remember mentioning “private parts”. Perhaps your definition is not the same as mine. Trump does as he’s told. Without thinking. So sad for America and Americans. Yet I sometimes think America needs to be at rock-bottom before she can make a comeback.

Memory is the thing that we take with us when last breath is only a memory spirited away form biological morphology and becomes quasi physiological complaint causing philanthropy falling on a deaf ears.

You only mention private parts because you feel sexy, have you tried bare back horse riding, I used to be a very good horse whisperer, and sometimes the horse would whisper back about what motor bike riders not being so involved with sex, due to the fact that their too busy keeping their mind on the road, that’s what horses told me, I don’t know how the found out.

New Mexico and the rest will probably just redivide the pie, the only other chance of consistency would be to continue with a massive Trade imbalance, why would the World support US making nothing and using everything except as a tribute to military control.

Fiat currency is only backed by force, Librarians to me are the 5th Column and the World will see it like that, the UN will take over with SDR (Special Drawing Rights) Fiat Currency, parasites will get plastered.

Climate Change will hit hard, population ceiling, the end of Techo. Ind. Age means no new inventions that can solve immediate problems, and the impossible to reverse concentration of wealth except by Social Security which most Countries can’t afford, is a real inescapable future, the US has resources and many don’t.

You can’t know what we take with us, Rodney. I never DID mention private parts—that is all in your head!

We only know what we perceive and concoct conceptions from it, there is a virus in this message have to be quick.

Got it had about 5 goes turning off and on, maybe i did extrapolate that took me in the direction of draconian revelation, don’t hate me after all subterfuge fiction indicates what Hyacinth really loved Glacier bit he still ended up a house pet

I was a private investigator once, or tried to be, but that’s as close as I want to make private parts public. The great PPP, so to speak.

I’ll google PPP later, and want to commend your prudence with unlimited praise, even when I was a hippie I was against public exposure, mind you not because I had anything to hide, quite the opposite in fact which only made it worse, I always felt like I was showing off, I think that was what attracted that mole Sue.

Finally the truth comes out, they were poisoned by a bad fish dinner. That is further supported by the fact Russians make all their Novichok class nerve agent from 3 day old fish. Their chem weapon lab is easy to locate since it is right across the street from the Vici plant.