As my regular readers will probably recall, according to my personal, pseudo-Chinese zodiac, 2017 was “The Year of the Headless Liberal Chicken.” This year, having given it considerable thought, and having consulted the I Ching, and assorted other oracles, I’m designating 2018 “The Year of Putin-Nazi Paranoia.” 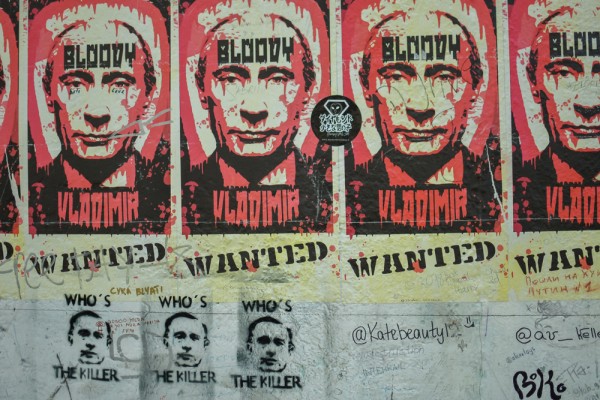 Not that 2017 wasn’t already paranoid. It was. It was completely paranoid, and otherwise clinically batshit crazy. But 2018 has been batshit crazier. It started out with the Internet companies that control the flow of information that most of us now perceive as “reality” launching an all-out War on Dissent, purportedly to protect the public from “divisive” and “confusing” content, and other forms of Russian “influencing.”

Twitter started sending out scary emails warning customers that there was “reason to believe” that they had “followed,” “retweeted,” or “liked the content of” accounts “connected to a propaganda effort by a Russian government-linked organization.” Facebook launched its own Ministry of Truth, manned by “a dedicated counter-terrorism team” of “former intelligence and law-enforcement officials” (also known as The Atlantic Council, NATO’s unofficial propaganda wing). Google stepped up its covert deranking of insufficiently Russia-hating and other “non-authoritative” websites.

This Orwellian corporate censorship campaign was enthusiastically welcomed by liberals and other Russia-and-Trump-obsessives, who by this time were already completely convinced that secret Russian Facebook agents were conspiring to transform the Western masses into zombified, Russia-loving neo-Nazis by means of some sort of irresistible Putin-Nazi hypno-technology that would melt their brains to oatmeal the second they clicked on one of those dancing cat GIFs.

But the paranoia was just getting started. By the Spring, professional Putin-Naziologists were issuing warnings explaining that anyone using words like “globalist,” “globalism,” or “global capitalism” was an anti-Semite. There was no such thing as “globalism,” they told us. “Globalist” was just Nazi codespeak for “JEW!” Moreover, anyone criticizing “the media,” or mentioning “banks,” “Wall Street,” or “Hollywood,” or, God help you, making fun of “George Soros,” was clearly a Russia-loving, Sieg-heiling Nazi.

Meanwhile, in London, Blairites were busy combing through six year-old Facebook posts in an effort to prove that Jeremy Corbyn had transformed the British Labour Party into his personal Putin-Nazi death cult. The Guardian published over one hundred articles smearing Corbyn as an anti-Semite and “linking” Labour to anti-Semitism. The BBC jacked up the Russia paranoia, doctoring Corbyn’s hat on TV to make it appear more insidiously Slavic. Owen Jones sprang to Corbyn’s defense, explaining that, yes, the Labour Party was a disgusting hive of anti-Semites, but they were doing their utmost to root out the Nazis, ban all criticism of the IDF, and reverse the mass exodus of Jews from London.

All this was happening in the wake of the notorious Novichok Porridge and Perfume Attacks, allegedly perpetrated by two totally incompetent, pot-smoking, prostitute-banging “assassins” that Putin personally dispatched to Salisbury to miserably fail to take out their target and then waltz around getting photographed by every CCTV camera in Great Britain. According to the corporate media, Putin tried to cover the crimes of these Jason Bourne-like GRU assassins by ordering his network of Putin-Nazi Twitter bots to flood the Internet with disinformation. Sky News captured and mercilessly interrogated one of these alleged “Twitter bots,”who it turned out was just a feisty British pensioner by the name of Ian, or at least that’s what Putin wants us to believe!

Back in America, millions of liberals and other Russia-and-Trump-obsessives were awaiting the Putin-Nazi Apocalypse, which despite the predictions of Resistance pundits had still, by the Summer, failed to materialize. The corporate media were speculating that Putin’s latest “secret scheme” was for Trump to destroy the Atlantic alliance by arriving late for the G7 meeting. Or maybe Putin’s secret scheme was to order Trump to sadistically lock up a bunch of migrants in metal cages, exactly as Obama had done before him … but these were special Nazi cages! And Trump was separating mothers and children, which, as General Michael Hayden reminded us, was more or less exactly the same as Auschwitz! Paul Krugman had apparently lost it, and was running around the offices of The New York Timesshrieking that “America as we know it is finished!” Soros had been smuggled back into Europe to single-handedly thwart the Putin-Nazi plot to “dominate the West,” which he planned to do by canceling the Brexit (which Putin had obviously orchestrated) and overthrowing the elected government of Italy (which, according to Soros, was a Putin-Nazi front).

As if that wasn’t paranoia-inducing enough, suddenly, Trump flew off to Helisnki to personally meet with the Devil Himself. The neoliberal establishment went totally apeshit. A columnist for The New York Times predicted that Trump, Putin, Le Pen, the AfD, and other such Nazis were secretly forming something called “the Alliance of Authoritarian and Reactionary States,” and intended to disband the European Union, and NATO, and impose international martial law and start ethnically cleansing the West of migrants. That, or Trump and Putin were simply using the summit as cover to attend some Nazi-equestrian homosexual orgy, which The Times took pains to illustrate by creating a little animated film depicting Trump and Putin as lovers. In any event, Jonathan Chait was certain that Trump had been a “Russian intelligence asset” since at least as early as 1987, and was going to Helsinki to “meet his handler.”

In the wake of the summit, the neoliberal Resistance, like some multi-headed mythical creature in the throes of acute amphetamine psychosis, started spastically jabbering about “treason” and “traitors,” and more or less demanding that Trump be tried, and taken out and shot on the White House lawn. A frenzy of neo-McCarthyism followed. Liberals started accusing people of being “traitorous agents of Trump and Moscow,” and openly calling for a CIA coup, because we were “facing a national security emergency!” A devastating Russian cyber-attack was due to begin at any moment. National Intelligence Director Dan Coats personally assured theAssociated Press that the little “Imminent Russia Attack” lights he had on his desk were “blinking red.”

Into this maelstrom of monomania boldly slunk the Charlottesville Nazis, who had resolved to reenact their infamous national white supremacist tikki torch conclave right across the street from the White House this year. The Resistance and Antifa had been promoting this event as the long anticipated Putin-Nazi uprising, and Kristallnacht II, and other such nonsense, so it was a bit of a letdown when only twenty or thirty rather timid Nazis turned up. It felt like maybe the Great Nazi Panic of 2018 was finally over.

But no, of course it wasn’t over. The Nazis had just gone underground. Weeks later, right there on national television, a Jewish-Mexican-American Nazi was spotted transmitting secret Nazi hand signals to her Nazi co-conspirators. One of them, a U.S. Coast Guard member, then relayed the secret Nazi signal to … well, it wasn’t entirely clear, perhaps the Underground Putin-Nazi Navy, which was steaming toward the Florida coast hidden in the eye of Hurricane Florence.

By the Autumn, with the midterm elections fast approaching, the Putin-Nazi terrorists finally struck. It soon became clear that those secret hand signs were just parts of a much larger Trumpian conspiracy to “embolden” a couple of totally psychotic wackos to unleash their hatred on the public. Wacko Number One accomplished this by mailing a series of non-exploding explosive devices to various prominent members of the neoliberal Resistance. Wacko Number Two stormed into a synagogue in Pittsburgh and murdered a lot of people. While the corporate media were unable to prove that Trump, Putin, or possibly Jeremy Corbyn, had personally “emboldened” these wackos, clearly, they had been “emboldened” by somebody, and thus were definitely domestic Putin-Nazi “terrorists,” and not just mentally disturbed individuals … like all the other mentally-disturbed individuals who go around murdering people all the time.

In November, at last, the tide began to turn. Despite the relentless “chaos campaign to undermine faith in American democracy” that the Russian bots and Nazis were waging, the Democrats managed to win back the House and rescue America from “the brink of fascism.” Apparently, the War on Dissent was working, because the millions of Black people that the Russians had brainwashed into not voting for Clinton in 2016 with those Jesus-doesn’t-like-masturbation memes had all miraculously been deprogrammed.

Liberals celebrated by singing hymns to Special Prosecutor Robert Muellerand compiling lists of people to subpoena to testify before congressional committees in what will someday be known as “the Hitlergate Hearings.” The New York Timeseven published a “roadmap” that Mueller and his team can follow to “send incriminating evidence directly to Congress,” thus protecting this “evidence” from the Justice Department, which is totally infested with Russians and Nazis!

But it’s not quite time for liberals to break out the vuvuzelas and Trump effigies yet … or to let up on the paranoia. The Putin-Nazi menace is still out there! The Internet is still literally crawling with all sorts of deviant, division sowing content! And now the Russian bots have brainwashed the French into staging these unruly Yellow Vest protests, and the Putin-Nazis have “weaponized” humor, and the economy, and religion, and Brexit, and Wikileaks, and pretty much everything else you can imagine. So this is no time to switch off the television, and log off the Internet, and start thinking critically … or to forget for one moment that THE NAZIS ARE COMING, and that A DEVASTATING RUSSIAN ATTACK IS IMMINENT!

So here’s wishing my Russia-and-Trump-obsessed readers a merry, teeth-clenching, anus-puckering Christmas and a somewhat mentally-healthier New Year! Me, I’m looking forward to discovering how batshit crazy things can get … I have a feeling we ain’t seen nothing yet.

C. J. Hopkins is an award-winning American playwright, novelist and political satirist based in Berlin. His plays are published by Bloomsbury Publishing (UK) and Broadway Play Publishing (USA). His debut novel, ZONE 23, is published by Snoggsworthy, Swaine & Cormorant. He can be reached at cjhopkins.com or consentfactory.org.

LOL this was great reading