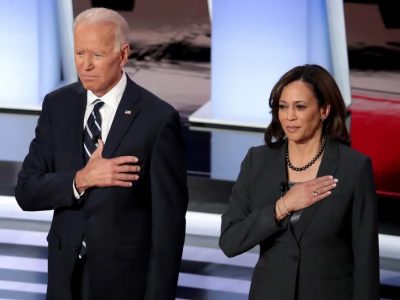 She is the third female nominee ever for a major party in the US, following Geraldine Ferraro and Sarah Palin.

“I have the great honor to announce that I’ve picked @KamalaHarris — a fearless fighter for the little guy, and one of the country’s finest public servants — as my running mate,” Biden tweeted.

Back when Kamala was Attorney General, she worked closely with Beau. I watched as they took on the big banks, lifted up working people, and protected women and kids from abuse. I was proud then, and I'm proud now to have her as my partner in this campaign.

Initially, Harris attempted to run for president, announcing her candidacy in January 2019, but in December 2019 she announced that she would give up, as she lacked enough funds.

After Biden and Harris launched their campaigns, in May 2019, senior members of the Congressional Black Caucus said that a Biden-Harris ticket would be an ideal combination to defeat Donald Trump and Mike Pence.

On April 17, 2020, Harris responded to media speculation and said that she “would be honored” to be Biden’s running mate. In late May, in relation to the death of George Floyd in an incident of police brutality and ensuing protests and demonstrations, Biden faced renewed calls to select a black woman to be his running mate, highlighting the law enforcement credentials of Harris and Val Demings.

On June 12, The New York Times reported that Harris was emerging as the frontrunner to be Biden’s running mate, as she is the only African American woman with the political experience typical of vice presidents.

On June 26, CNN reported that more than a dozen people close to the Biden search process considered Harris one of Biden’s top four contenders, along with Elizabeth Warren, Val Demings, and Keisha Lance Bottoms.

That’s a lot of firsts.

She is also known as somebody who defends LGBTQ rights, but it would be more correct to say she simply doesn’t oppose them, since what’s generally done in her work as Attorney General of California is to avoid the matter, and not provide any significant support, but also no significant opposition.

And as media presented it prior to her being announced, and the vetting process – more than anything the VP candidate needed to be a woman, if possible, a black woman, and the more dissatisfied she appears with law enforcement – the better.

That is how votes are currently won – with populism, since she has some typical political experience, and it is questionable if its enough, but she fits the demographic required by the current supporter group of the Democratic party.

She prosecuted over 3000 people for smoking pot and she jockingly admitted she smoked pot too.

Very cruel, easy pickings just to get ahead. Ruthless.

yep, she is ruthless.

Irrelevant and unsuccessful choice, however it goes for the Yankees is the end of the game, whoever wins between the two elders will put an end to American dreams, there is no escape.

Trump has been unpopular with the establishment and wouldn’t be trusted to oversee a major war. With these new guys coming into office, there’s actually a real risk of a major war in our hands, even WW3

UGh. A woman who is willing to exploit the race card. If she wins, it is going to be a term of race oriented policies. Id like to see a person of color who does not even use the race card.

She’s not African American, she’s of Jamaican and Indian descent.

…and Irish on her father’s side, as well.

She has Irish and Indian ancestry and yet the MSM keeps calling her an African American.

Obviously pandering to the black vote

Current western ‘left-wing’ identity based politics is all about using ‘oppression status’ as best fits the political situation for personal gain – in campaigning she will shamelessly shift her self identify to tailor to the differing ethnic and racial demographic crowds of electorate. Liberal US-MSM will not call out this behavior – on contrary, will openly support it.

Wouldn’t matter. The Democrats have already lost the election. This BLM bullshit and screwing Sanders over again have pissed off too many people.

senile retard and Black Lives Matter bitch, that would be such nice arrangement for future racial civil riots and civil war that would follow…

we are counting on your hunger for violence and killings, America do not disappoint us !

Desont matter everyone in the US goverment has to kneel in front of zionist run goverment Aipack an israel. so all are same. warmongers.

A senile fool and a negro what could go wrong?

is she real “camel toe”…any close up photo to verify? :)

I wasn’t aware that “populists” want to bomb other countries into smithereens It’s always left out that Kamala is a descendant of Irish slave owners in Jamaica.

Just what the Democrats needs…a brain dead asshole and a lying asshole.

I find it a strange sight to watch people say the Pledge of Allegiance and mechanically recite “with liberty and justice for all” when it is so obvious that there isn’t.

It wouldn’t matter that much and that is if Biden wins. Israel like Trump to win….sorry did I said Israel, my bad I meant Russia ofc Russia :)

lucky you, that was in the last moment…, you almost went…. rouge

I dont think joe knows what he is in for, kamala is no push over, her mother raised them alone and she is very educated and so are most of their family. She wont be easily moved aside and some think she lost out to tulsi but I doubt tulsi is as tough a bird even being a former soldier..

Do you really think Biden is the one who decides which person will be his VP? Everyone who has remainings of common sense do understand that Biden is walking dead and there is a high probability Biden will die before his presidential ends. In this case VP becomes first person in the USA.

Gabbard is still a soldier. Loved how she crushed Harris during the primaries.

that monologue about the “pants”, was the most important thing that Biden ever said in his life. for the first time in his life he was interested in real facts and truth.

The held inmate phenotypeless fat American rat people were so dumbed down by the Jew’s fake “government”, that I guess anybody who comes to get elected would be able to start a war against non-goyim countries.

She is waaay too old for pedo Biden tho…

Harris is Fanon’s “masque”; fake people desire fake leaders,,,I suspect this will convince many to vote trump…..tired of their plywood cities and the corporate capitalist BLM/walmart counter-revolutionary bad manners they may seek to extend their rotting empire another few years