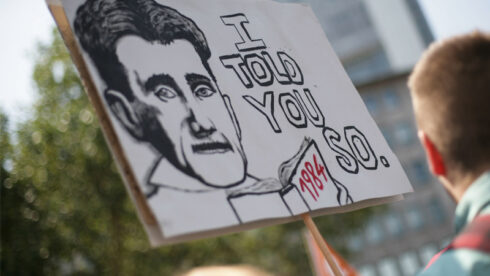 Language is a critical tool for communication among humans; we cry “watch out” when a speeding car hurtles toward a pedestrian.

We also think of language as a cognitive tool for society at large, since all human learning is closely tied to how we learn and process language.

Yet sometimes we forget language is also an important social and cultural institution. And like all institutions, it is subject to corruption, in the form of capture by elites with agendas quite contrary to those of average people. Since language shapes our understanding of all human interactions, academics from all disciplines—but particularly social scientists—ought to pay more attention to linguistic corruption. When language becomes politicized, managed, and policed, we ought to notice, and we ought to fight back.

I make this very point in an upcoming article titled “Evolution or Corruption: The Imposition of Political Language in the West Today,” which will be published this fall in the Italian journal Etica e politica (put out by the University of Trieste Department of Philosophy). The article argues that top-down impositions, rather than natural evolution, often drive changes in language. It analogizes the linguistic “marketplace” with the market for goods and services. Impositions are akin to central planning, while evolution is akin to spontaneous order in the marketplace. The former occurs when elites in politics, media, journalism, and academia attempt to influence both the words we use and the meaning of those words. This is invariably in service of a statist agenda, just as economic interventions serve preferred interests at the expense of overall wealth and efficiency. The constant use and repetition of the word “gender” (a term relating to grammar) when we should use “sex” is one obvious example of imposed, corrupted language in service of a political agenda (trans). By contrast, the Middle English “whilst” sounds odd to our ear today—having naturally evolved into “while” without obvious or heavy-handed direction.

Thus there is an unconscious social process of learning by imitation which explains how the pioneering behavior of these most successful and creative individuals catches on and eventually extends to the rest of society. Also, due to this evolutionary process, those societies which first adopt successful principles and institutions tend to spread and prevail over other social groups. Although Menger developed his theory in relation to the origin and evolution of money, he also mentions that the same essential theoretical framework can be easily applied to the study of the origins and development of language, as well as to our present topic, juridical institutions. Hence the paradoxical fact that the moral, juridical, economic, and linguistic institutions which are most important and essential to man’s life in society are not of his own creation, because he lacks the necessary intellectual might to assimilate the vast body of random information that these institutions generate. On the contrary, these institutions inevitably and spontaneously emanate from the social process of human interaction which Menger believes should be the main research in economics.1

Today, it appears linguistic interventionism is alive and well in the West. Language is a subset of culture, albeit a very important subset, and we can hardly expect progressives to leave it alone. Like culture, language is not property, and it cannot be “owned.” But it can be influenced and steered by linguistic vandals seeking to topple old understandings and leave us all overwhelmed and demoralized by the ever-shifting new terminology.

In the quaint, innocent days of 2015, we still called this progressive impulse “political correctness.” I attempted to define it then:

Political correctness is the conscious, designed manipulation of language intended to change the way people speak, write, think, feel, and act, in furtherance of an agenda.

PC is best understood as propaganda, which is how I suggest we approach it. But unlike propaganda, which historically has been used by governments to win favor for a particular campaign or effort, PC is all-encompassing. It seeks nothing less than to mold us into modern versions of Marx’s un-alienated society man, freed of all his bourgeois pretensions and humdrum social conventions.

Like all propaganda, PC fundamentally is a lie. It is about refusing to deal with the underlying nature of reality, in fact attempting to alter that reality by legislative and social fiat. A is no longer A.

Today, of course, PC is obsolete—replaced entirely by the far broader concept of “woke,” which goes well beyond language. And to be sure, “woke” is so vague and so overused as to be a poignant example of George Orwell’s meaningless words, which I discuss at length in the article. Meaningless words, Orwell explained, are used in consciously dishonest ways in furtherance of an agenda. They become disembodied from any real meaning or definition, serving as empty slogans for things we like (“democracy”) or things we don’t like (“fascism”).

Here is an example of a progressive using “woke” as code for “the correct left progressive attitudes”:

“Woke” is defined as being aware of injustice in society, especially, but not limited to, racism. Which doesn’t seem anything that most people would be opposed to, especially superhero comics, which would seem to be all about fighting injustice but, I guess, welcome to the internet.

Well, no, that is distinctly not what “woke” means. It is self-serving claptrap: “All good people (Us) are woke, which is really just left-wing code for caring and empathetic! Who could deny injustice and racism! I’d hate to think what unwoke people (Them) really believe, ho ho ho!” But these language imposers are not good people at all, or even well-intentioned people. Quite the opposite; they are lying, dissembling, projecting ideologues who want to commandeer the English language. Woke is the animating force behind today’s relentless progressive attempts to impose and corrupt language to advance a host of wholly politicized movements.

Even five years ago, the top-down or centralized force operating to corrupt the language of politics and economics could have been broadly termed “political correctness” (PC). Today the term is obsolete, another example of the rapid (unnatural) evolution of usage in Western society. PC referred more narrowly to acceptable speech, whereas today’s linguistic enforcers seek to impose a whole new mindset, attitude, and way of thinking. Thus, PC has been replaced by an even broader and more amorphous term, “woke.” Woke, whether a slur or not, may be used very broadly to represent strident left progressive beliefs regarding race, sex, sexuality, equality, climate change, and the like. Woke demands ever-changing language, and constantly creates new words while eliminating old ones. As a result, “cancellation,” de-platforming, and loss of employment or standing all loom large, giving pause to speakers and writers who must consider a new woke orthodoxy.

I’m afraid the paper is embargoed until September, so I can’t provide the actual text yet. Both Orwell and F.A. Hayek figure prominently in it, and it is full of examples of imposed, contorted language issued by politicians, CEOs, central bankers, media figures, advertisers, academics, and elites of every stripe. It argues that language is worth defending from the linguistic vandals at every turn. In fact, language is the one institution we can defend every day through our own thoughts, words, and writing. It is guerrilla warfare, fought every day in the trenches.

The war on language is that anybody in Russia who says that the special moronic operation is a war or an invasion will go to a Russian shithole prison. Aparently a terrorist human cockroach like Vladimir Putin doesn’t want to be reminded that he just started a full scale war against a neighboring country.

kotromanic
Reply to  Muhammad your Prophet

I do not know what country you are from but in germany not a single war we or nato was involved with was called a war. They were called “Peace operations” “Freedom Operations” “Security Operations” Humanitarian Intervention” and so on. They even told the public that german soldiers are in afghanistan to build girls schools and dig water wells… One president hat to give up his position cause he openly said that we should admit that we as a countrie which does trade need to protect our trade lines and secure rescources. He was ousted with outrage “how dare he we use the military for anything but the greater good.”

So russia is just taking a page out of the book of the USA. Just like with the “war on terrorists / fashists” the “responsibility to protect”.

They just use the terms the west used before or still uses.

I would have to disagree with you. USA’s various “operations” were against countries far away. They had nothing to do with their stated goals or aims. In the end most of their so-called operations were about money, resources, imperialism and/or furthering Israel’s goals.

Russia on the other hand has a clear existential threat on its border and this operation wasn’t cooked up overnight willy nilly. For years and even decades Russia has been trying to stop NATO’s encroachment and work out a security agreement for it’s legitimate security concerns. To no avail. Cause and effect. Now we have the situation in Ukraine as a result.

I think V Putin is continually reminding the world that he launched his preemptive war against Ukraine, for the very reasons Russian Federation promised to solve the Ukrainian problem on the “field of diplomacy or the field of battle”. Ukraine has been waging a brutal war against its own people since 2014.

Xcalibur
Reply to  Muhammad your Prophet

Lol. But to respond fairly: Russia is not immune to the use of propaganda. However, linguistic subversion is far more advanced in the West, like many other problems.

jewish subversion that is what it is. Provably jews run the west. They got total control of it after WW2 which they won thru their puppets.

Absolutely. Jews are the masters at subverting. They introduce garbage words or terms like “pronouns” to mess with people and shape them.

They are also master liars and always try to tell goy’s that there are “good Jews.”

There are no good Jews. The Talmud tells them to lie as much as they want to goy.

The outcome of the war is largely irrelevant. What is important, and never forget this, is that we have goyim killing goyim on an industrial scale. What happens afterwards will be controlled by our money power.

I am all for curbs on speech. Freedom of speech in the U.S. has only given power to degenerates. Look at Hollywood and the entertainment industry which is full of vile images and language.

I went to the corner store and two black guys were at the counter in front of me. They were both holding their crotch to keep their pants up and nothing but profanity was coming out of their mouths.

Those who say, as I commonly hear: “I don’t agree with them but I support their right to say what they want.” are nothing but degenerate liberals disguising themselves as conservative Christians.

I tried to upvote your comment but SF won’t allow it.

Well, at least they let me downvote your nonsense.

It’s something at SF. It does it a lot.

It happened to me as well for someone else.

Yup, “Freedom of Speech” argument is the argument for “Freedom of Deception”. When you listen to degenerates, their every single uttered word is a lie. Also the language is really butchered by these ‘free speech” degenerates by using shitloads of meaningless words and slang. Like in Medicine – almost every single word is completely incomprehensible. They do that so you cannot understand about your health and about medicine. Words should be understandable, otherwise how can these degenerate doctors even make a correct diagnosis? The demand should be for Truthful Speech/Logos (that is Jesus Christ’s title in the Bible) with zero freedom.

The current distortion/perversion of language that seeks to corrupt reality itself is very worrying. Looking forward to read your paper…