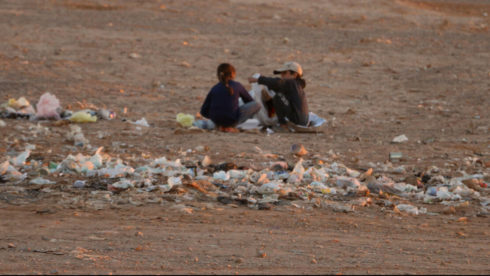 Children look for food scraps in a pile of trash in the Rukban camp in Syria, Nov, 2018

Famine will come. 100 million tons of wheat will be missing from the world food market. 26 are those produced by Ukraine, the remainder is that relating to Russian production, even that blocked for international exports. The conflict being fought in Ukraine risks causing thousands of deaths in Africa and the Middle East. They are the collateral damage of the conflict. The specter of famine emerges from the stop to grain production in Ukraine.

The Black Sea area hit by the Ukrainian crisis exports at least 12 percent of the food calories traded in the world. Ukraine has one third of the most fertile soil in the world according to the Food and Agriculture Organization of the United Nations (FAO) and 45% of its exports are related to agriculture. It is among the world’s leading exporters of sunflower oil, canola and barley, corn, wheat and poultry. Much of the country’s wheat production comes from parts of eastern Ukraine.

On March 9, Kiev banned exports of grain and other food products to prevent an internal crisis. Meanwhile, the farmers are abandoning the fields. The conflict is destroying infrastructure and equipment. The next harvest is probably skipped.

Across the world, the prices of essential food were already rising globally due to the pandemic and disruptions in the food supply chain. In 2020, due to the pandemic, food prices in Africa and the Middle East rose by more than 30%. The Ukrainian crisis has further pushed prices to reach their highest level since 1974, when adjusting to inflation, according to the FAO. Nearly one in three people in the Middle East and North Africa did not have access to adequate nutrition in 2020; an increase of 10 million people in just one year. 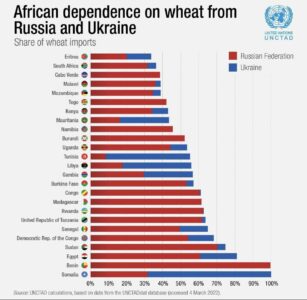 The crisis in Ukraine exacerbates the problems. Many countries in the Middle East and North Africa are particularly dependent on Ukrainian wheat and seed oil and are vulnerable to food price shocks. In these countries, bread and other cereal-based products make up 35% of the population’s calorie intake.

According to Human Rights Watch, “many countries in the Middle East and North Africa have seriously inadequate social protection systems that do not protect people’s economic rights to help them cope with rising prices.”

Particularly at risk are countries already struggling with crises and widespread food insecurity such as Yemen, Lebanon, Egypt, Libya, Tunisia and Syria. In Egypt, in the face of rising prices and the prospect of a rapid depletion of stocks, President al-Sisi announced new incentives for the agricultural sector and for controlling the price at the sale. Also imposed a three-month ban on the export of oil, corn, legumes, pasta and flour. The crisis also wears down the finances of the country that is looking for new loans. The North African country would only have nine months to see its grain reserves dry up due to a halt to supplies from Ukraine.

Egypt, for example, imports about 85% of its wheat from Russia and Ukraine. The spokesman for the Cairo government, Nader Saad, raised the problem by recalling that the available reserves are used to meet internal needs for only five months.

“There are 14 countries besides Russia and Ukraine that can supply grain to Egypt outside of Europe, including Australia, the United States and Paraguay,” Saad added. “But not at the same price.”

According to Human Rights Watch “sanctions on Russia risk aggravating the food crisis”. The NGO stresses that “food exporting countries should meet their national needs, but they should also work with import-dependent countries to establish alternative supply chains. Sanctions on Russia or the divestment of companies from the country should take into account the impact on agriculture-related exports to the extent that this will have an impact on food security for many populations. ” Human Rights Watch hopes that “governments and international institutions will increase humanitarian assistance to countries that do not have adequate resources to provide people with the support they need to protect their right to food”.

Europe too will soon have to deal with the shortage of wheat and fertilizers. Sanctions on Russia are proving to be a dangerous boomerang.

They are not verry important. There are to many of theem anyways.

Just dont let them come here. We dont need them. We are not UNICEF or Father Claus We are kapitalisme best to the price.

They are not important but you and your husband are? EU liberals and their famous humanism.

Typical EuroNazi showing his true face. Considering your demography, in a hundred years you’ll be replaced in your own country by these people you consider subhuman. Divine justice.

When will westerners stop plundering Africa?

They are so important that the West decided to colonise them, loot their riches (Africa is the richest continent) and then still looting it. But Africa wants to be let alone, to get through beyond help: the so called halp meant to mess things there and continue looting Africa’s richness. Take it all and keep Africa in poverty. Which is utterly unfair. But guess what: should they will face a new famine, they WILL come to EU and not a few, but tens of millions, Europe will be destroyed and this will be Europe’s fault with their messing in others politics, which they always do. Western Europeans, Easterners are as looted as Africans are!

Every human no matter what race or colour deserves a full belly of food, safety and to be treated with respect.

Nazi’s aren’t human, neither are azov scum, starve those fat fucks and feed a family of from Africa or The Middle East.

When you volunteer to house a young Ukrainian refugee female student to impress your Facebook friends, and then a taxi arrives with a big Somalian family 😀 https://pbs.twimg.com/media/FO2t6J1VkAE8pwx?format=jpg&name=medium

what the fuck is you, you freak

And the problem is? It only means that Africa will definitively side with Russia and have all the needed wheat. While the eurorodents will starve like the idiots they are. It is that simple.

The americans have wheat for themselves and maybe their dog the UK. The world is happy, the EU is fucked!

Don’t worry Ukraine…Monsanto will come and fix all your problems. Terminator seeds will enter Europe one way or another. LOL

you lose–u cry I enjoy

Russia can easily take over.

The important point is this: The world can be fed even without Ukrainian grain. However, the global elites destroyed local production to increase dependencies. The same in Europe, why the continuous decrease of natural gas production, coal and agriculture? Then provoke a war with Russia Ukraine… so you have an excuse for even more people dying, since ‚vaccinations‘ aren‘t enough. The crisis is manufactured from a to z.

Syria backed Russia, so in turn Russia will look after them.

This is all part of the depopulation plan: it is INTENTIONAL behavior by governments to CREATE shortages of food. It’s no coincidence that for the FIRST TIME in world history ALL of the presidents and prime ministers used the exact same LANGUAGE talking about “Build Back Better”. That phrase is created by the World Economic Forum along with their disease-creation programs around the globe. The information is all over and it is beyond any doubts that they intend to continue their Crimes Against Humanity agenda. People afraid to admit it are either unifomed or too cowardly to speak up.

Basically Biden sanctioned Putin but everyone else is the real victim of those sanctions, causing a very scary global megacrisis. At least Sri Lanka and Paraguay are already bursting in flames because of the issue of extremely high oil prices, while at least France and Spain are facing weeks-long truckers’ strike demanding also affordable oil somehow, while companies were already stopping production because of extremely high energy prices even before the war.

Biden gloated in public that the Europe will pay a hefty socio-economic price for the sanctions but that he doesn’t care because it is apparently good for the USA and that’s all it matters (yes, the USA also exports oil, gas and cereals and has used this crisis to rally “brain dead” NATO back to live, artificial and fragile as it may be). And Europe is probably not even half as exposed as Africa or elsewhere in the “global south” because after all so far it is relatively well off (but will be much poorer after this, no doubt).

The problem is only Christian white countries can grow enough food. The rest of the world just makes babies and war against Christians.

the rest of the world just akes babie because the only way to grow enough food is to get freedom by aking war ever day like wite people. if ou have nothing to say, just shut up.

You’re not smart enough to make a good imbecile. Suicide is always an option you could explore.

The four horsemen shall ride!

gringos and nato will pay double for gas and Russian fertilizer–amerikants should expect food costs to double this year—the 1.3 billion $ spent on Russian fertilizers 2021 will cost you losers double or triple…bye bye nazi usa …the lgbt empire dying

I hope they allow the poor south and middle east to buy directly from Russia in Roubles or Yuan.

Not a problem for Russia. Cynically speaking, the Russians can pick and choose who to supply with some food aid. The instability that food shortages will cause in the middle east and Africa are a major problem for the US and the EU. Folks in Africa will head north towards Europe, adding to the expected 10 million of Ukrainian refugees. Every instability in the middle east will eventually require US boots on the ground to deal with. And both, the US and the EU, will have to deal with food price inflation in their own borders. This will be funny to watch as well. Especially in the US.

Africa, its people support Russia. Completely .The only reliable Eurasian friend Africa ever had, thanks to the Soviet Union.They are more wary of China but open to the possibilities China offers. If Russia and China got serious about squeezing the Europeans and Americans out of Africa they would have the support of Africans