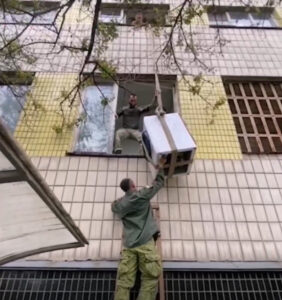 Servicemen of the Armed Forces of Ukraine shared a video in which they complain about their comrades who do not care about the lives of Ukrainian soldiers and try to take as much loot as possible from villages destroyed by the war.

The soldiers on the video claim:

I’m shooting a video. That’s how we’re going to withdraw. The car has to be loaded with ammunition, and there’s a bunch of fucking stuff. Goddamn it. Fuck, this was looted. Well, they are not morons?! There is no place for people. Fuck. There are no places for people, no equipment, no cars. Absolutely no fucking cars at all. What the fuck is that?!

More videos from the war-torn regions confirmed that Ukrainian servicemen are robbing apartments of civilians:

Another video was made in the city of Severodonetsk before the Russian military entered its outskirts. The local citizen complained that Ukrainian militants robbed the local shops and took cars, appliances from civilians. LINK

It should not be excluded that military personnel from both sides may take the necessary equipment from local residents for their needs. However, it should be borne in mind that Russian military personnel are deployed on hostile territory and conduct offensive operations. Thus, they are probably less interested in stealing and bothering with transfer of Ukrainian “washing machines”, but they are more interested in military trophies. At the same time, the military personnel of the AFU retreat from their combat positions on the territory of their own country and have the opportunity to choose what to take with them. In this case, suffering losses and unwilling to continue fighting, they prefer to leave their military equipment on the spot and take with them as many goods as possible to sell them and earn money.

It makes sense because it looks like they used washer machines to build those shitty Russian tanks. Now all those destroyed washing machines are all piled up in the streets of Kiev and paraded around by the Ukrainian government all across Europe.

Dodo
Reply to  Muhammad your Prophet

What the hell are you even talking about ? Lol

Last edited 3 months ago by Work At Home
-3
Reply

War
Reply to  Work At Home

Torquemada
Reply to  Muhammad your Prophet

Mo Ham Head Was A Pedo!
Reply to  Muhammad your Prophet

I see the tertiary syphilis has reached your cortex, clearly doing much damage!

Inquisition
Reply to  Muhammad your Prophet

You seems to have low iq ,how many washing machine you need to build tank one machine for one tank-screw.

If the instructions are in English they won’t be able to operate the washers.

This is how the Nazis wanted to win ‘hearts and minds’ of Donbas people: by robbing and beating them, taking their money, turning their home into hideouts. And sadly, in more extreme cases by simply shelling them.

It makes sense since most of the ukranian soldiers stink quite badly due to lack of personal hygiene products and availability to wash dirty used uniforms bc of logistics failures… I also read in another news site that deodorant and tooth brushes are a VERY prized loot for the soldiers on both sides, at least on the frontlines. Just imagine having to sleep side by side with the boys in this conditions… ewww. In one, a BBC correspondent said the smell of sweat on an bunker on the front was horrific

Where are they are shitting? Toilet paper? What’s that?

How do you expect soldiers to smell on the front line? like Brut? French cologne?

Lol of course not. But its just disgusting nontheless

Oh no no, they are just helping civilians to leave ;). Their leader is a gay Zion clown after all.

I thought the Donbas was friendly country for the Russians, that is supposedly the reason they are there????????Freudian slip? or just terrible writing?

They probably learn to do it just looking at the Chechens, Russians and LPR/DPR soldiers.

No joke there is a recent P. Lancaster video where a LPR soldier candidly explain their only war hobby is getting trophies!?!

So his life…some steal appliances other ones fields, lands and grains enough to fill huge cargos.

Karma is a bitch!

A passerby
Reply to  Tell666

The Russians have nothing to do with it, Ukrainian troops have been looting in the Donbas since 2014, even Ukrainian TV channels in 2015 filmed reports on this.

So if there is karma, it is on the side of the Russians.

Last edited 3 months ago by A passerby
12
Reply

A passerby
Reply to  Tell666

Last edited 3 months ago by A passerby
0
Reply

They learn to do it just look at US lobed Iraq ‘s gold.

They are just pathetic losers and a disgrace to their race. Stealing washing machines! What the hell is wrong with these people?

Can’t really blame the soldiers. After all, do you really think what’s left of the Ukraine government when this is over, is going to pay soldiers, or provide them with healthcare? The fact is, Ukraine was looted by the Jews first (Kolomoisky for example), and the scraps are left for the gentiles.

Is Whirlpool paying you SF?

Russians are gonna be pissed, they badly need those washing machines – where else are they going to get chips for their weapons since they can’t build their own 😆😆😆

It might be cheaper to buy Nato weapons on the black market than to destroy them on the battlefield. Don’t know.

scum of the earth

Its important to have clean uniforms at their funeral services.