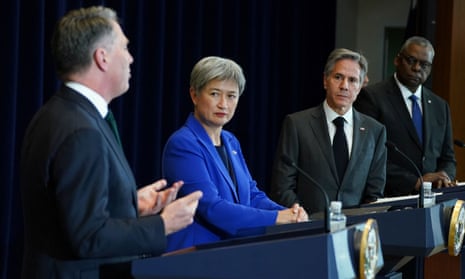 From right: the US defence secretary, Lloyd Austin, and the US secretary of state, Antony Blinken, welcomed Australia’s minister for foreign affairs, Penny Wong, and the minister of defence, Richard Marles, to the US state department on Wednesday. Photograph: Kevin Lamarque/Reuters

On December 6, Secretary of State Antony Blinken and Secretary of Defense Lloyd Austin hosted Australia’s Foreign Minister Penny Wong and Deputy Prime Minister and Minister for Defence Richard Marles.  It was the 32nd occasion the countries had met in this setting.

The Australia-US Ministerial Consultations (AUSMIN) is really a chat fest held between Australian Ministers for Defence and Foreign Affairs along with the US Secretaries of State and Defense, accompanied by officials of touted seniority.  Advertised as an occasion for the states “to discuss and share perspectives and approaches on major global and regional political issues, and to deepen bilateral foreign security and defence cooperation,” it is more accurately an occasion for Washington to keep an eye on its satellite.

The occasion would have been a disappointment for sceptics of the US-Australian alliance, one that has seen Australians join, with somnambulistic facility, failed distant, needless wars.  Even with a change of government in Canberra, it is clear that the US security lobby remains ascendant, tranquilising Australian politicians with the virtues of the alliance.

The joint statement from Blinken, Austin, Wong and Marles was filled with the gruel of banality: rules-based order, as they understood it; the importance of the relationship to “regional peace and prosperity”, despite signs it is becoming increasingly dangerous to that cause; and utterances about human rights and fundamental freedoms.

For keen watchers of encroaching militarism, the following would have stood out: “The principals also decided to evolve their defense and security cooperation to ensure they are equipped to deter aggression, counter coercion, and make space for sovereign decision making.”

This could hardly be a reference to Australian sovereignty, given its whittling down over the years to the decisions of an increasingly more engaged US in the Indo-Pacific region.  While Canberra decries any moves by Pacific Island neighbours to exercise their own rights of sovereignty to seal security arrangements with Beijing, it ignores its own subordinate, increasingly garrisoned role in the US imperium.

China comes in for a predictable mauling, given its actions in the South China Sea and the making of “excessive maritime claims that are inconsistent with international law.”  Wishing to enrage the Yellow Devil further, the parties also reiterate “Taiwan’s role as a leading democracy in the Indo-Pacific region, an important regional economy, and a key contributor to critical supply chains.”

Strategic competition, as a concept, was fine in principle, but to be pursued “responsibly,” a word that has little meaning in the thuggery of international politics.  The parties also agreed to “work together to ensure competition does not escalate into conflict” and looked to the PRC “to do the same and to engage Beijing on risk reduction and transparency measures.”  More could be done on the issue of transparency and China’s nuclear arsenal, for instance.

The statement then goes on to raise the importance of cooperation with Beijing in some areas of mutual concern followed by a sharp backhanded serve.  Cooperation with China on “issues of shared interest, including climate change, pandemic threats, non-proliferation, countering illicit and illegal narcotics, the global food crisis, and macroeconomic issues” was important, but so was “enhancing deterrence and resilience through coordinated efforts to offer Indo-Pacific nations support to resist subversion and coercion of any kind.”

There is also more poking with the expression of “serious concerns about severe human rights violations in Xinjiang, the human rights situation in Tibet, and the systematic erosion of Hong Kong’s autonomy, democratic institutions, and processes undermining commitments made by the PRC before the handover.”

Australia’s promised submarines under the AUKUS security pact, almost as credible as the Loch Ness monster, receives an airing.  Giving nothing away, the statement “commended the significant progress AUKUS partners have made on developing the optimal pathway for Australia to acquire a conventionally armed, nuclear-powered submarine capability at the earliest possible date.”  No date is provided, but a year on when that optimal pathway will be miraculously revealed is 2023.  Best not wait up.

The joint statement does little to dissuade the idea that Australia is moving, inexorably, towards a satellite, garrison state to be disposed of and used by the US imperium.  Under the “Forced Posture Initiatives” – the wording is telling – the US will further integrate Australia into its military operations via Enhanced Land Cooperation, Enhanced Maritime Cooperation, and the Combined, Logistics, Sustainment, and Maintenance Enterprise.

The US armed forces would continue its “rotational presence” in Australia across air, land and sea including “US Bomber Task Force rotations, fighters, and future rotations of US Navy and US Army capabilities.”  The emphasis, in other words, is entirely US-centric, with Australia’s posture being rather supine, even as it aids “US force posture with associated infrastructure, including runway improvements, parking aprons, fuel infrastructure, explosive storage infrastructure, and facilities to support the workforce.”

What a wonderful list of targets for any future foe, and bound to become even juicier with Austin’s promise to “find ways to further integrate our defense industrial bases in the years ahead.”

While they do not tend to make regular appearances on uncritical mainstream news outlets, Australian civil society members have been alarmed by such moves. The 280 submissions to the Independent and Peaceful Australian Network (IPAN) addressing the high cost of Australia’s relationship with the United States attest to a very different narrative.

IPAN’s report drawn from its People’s Inquiry into “Exploring the Case for an Independent and Peaceful Australia,” informed by those submissions and released last month, should be mandatory reading for Canberra’s insular policy hacks.  In his contribution to the report covering the defence and military aspects of the alliance, Vince Scappatura took note of the most pressing concern among the submissions: “that the alliance makes Australia an unnecessary target of America’s foes.”

The alliance has also seen Australia committed to “several needless and costly wars and is likely to do so again in the future, with especially grave consequences in the context of the great power rivalry between the US and China.”  Unfortunately for the industrious Scappatura and those honourable souls determined to force a revision of the relationship, the sleepwalkers are in charge.  And when that happens, wars are rarely far away.

China will invade Australian islands thats why governor of the Australians fly to Usa , to able to get help for China Offensive

I am not sure about this.

Your stupid niggerdly comment shows that you need to quit doing meth. Next time atleast don’t post when high. OK?

Usa wants to pillage money via defense spending,they don’t give a flying fk about Australian democracy, they have nothing of value to offer other than the odd shipping discount or nuclear submarines,big if.

Our leaders in AUSTRALIA DO NOT SPEAK FOR US THE CITIZENS OF AUSTRALIA but we are powerless to do anything about it as no matter WHO YOU VOTE IN both parties are NOTHING BUT USA LACKIES. we the CITIZENS OF AUSTRALIA SUPPORT BOTH RUSSIA AND CHINA and WE DO NOT WANT THE FILTHY USA TROOPS IN OUT COUNTRY in fact we go out of our way to beat up any USA service men who dare show their FILTHY FACES IN OUR STREETS but NONE OF THIS GETS REPORTED by the media who are lapdogs to CANBERRA and who are themselves LAPDOGS TO THE USA. Sir Gough Whitlam was the LAST Australian who stood up for Australia and he was DEPOSED by the MACHINATIONS OF THE USA GOVERNMENT for not kowtowing and obeying them and this is FACT as released by SECRET USA DOCUMENTS after the 50 year SECRECY ACT EXPIRED. =Z=

Vote for Independent candidates and that would get rid of the 2 pier political parties and US influence.

Australia don’t got a chance in hell surviving without a US alliance. The smart cookies down unda are brighter than you peddling your third world conspiracy. You sound like that superstitious idiotic moderator at Press TV.

China means 45% trade and I know more about working Australians than you scabby soros simp!

AUS is occupied, exploited and looted by the US empire the same as the UK, EU & others

Atleast thats usas perogative,fortunately not all Australians are as dumb as the others these days, this is a Usa desperate plea for more freeby$ from Australian taxpayers via cia defense wastage!