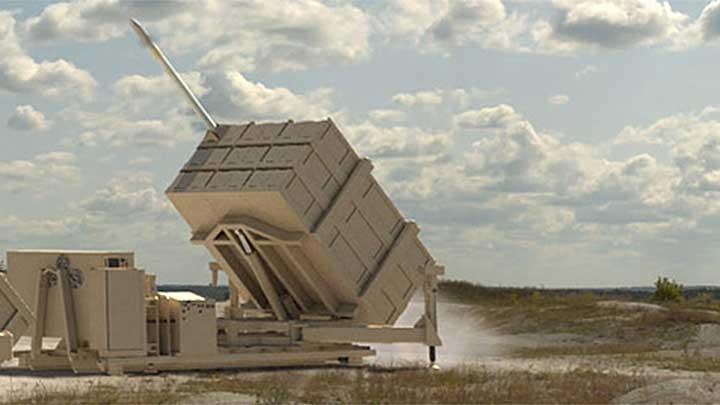 The United States is working hard on its own variation of the Israeli Iron Dome.

In June 2021, Dynetics, a company owned by Leidos, which in turn is part of Lockheed Martin, unveiled its “Enduring Shield.”

It was not known that Dynetics even took part in the competition for the US Army’s enduring indirect fires protection capability, designed to defend against a variety of airborne threats.

One competing team consists of Rafael and Raytheon, offering up the Iron Dome launcher and Tamir interceptor.

Currently, the US Army is using Iron Dome, anyway, as an interim cruise missile defense capability as it works to adopt an enduring solution to counter drones and cruise missiles.

For the live-fire test, Dynetics was bringing a launcher based off the Army’s internally developed, but then canceled, Multi-Mission Launcher along with the Raytheon-produced AIM-9X Sidewinder interceptor.

Initially, the interceptor was a mystery and kept secret. But its launcher, Enduring Shield, takes know-how from the Multi-Mission Launcher’s development and improves upon it.

The system is built with a modular, open-system architecture which makes it possible to use any interceptor with the launcher.

The MML had trouble with reloading, and the AIM-9X had issues with overheating. With changes to the launcher all issues were resolved by Dynetics.

The company has relevant experience designing launchers, as mentioned it has history on the MML program, and also its current efforts to build the launcher for the Army’s ground-launched hypersonic missile. Dynetics is also building the first glide bodies for those hypersonic missiles.

Dynetics also has experience on the Indirect Fires Protection Capability program, developing a 300-kilowatt laser on a Heavy Expanded Mobility Tactical Truck, to serve as a possible countermeasure for an enduring solution.

But currently, even with Dynetics’ impressive history, the US Army has limited options – one is a combined Iron Dome with an older interceptor, while Dynetics is using a refurbished system that failed once before.

Still, it appears that the company hopes to be the winner, as it attempts to meet the accelerated schedule that the US Army wants for the defensive system, as well as it has invested quite a bit of its own funds in the program, unlike Rafael and Raytheon, who simply bring ready solutions to the table.

They’ll be lucky if they’re able to shoot down a homing pigeon with Joo tech.

The USA only have about 3 decades to catch up on Russian anti missile tech. After that, the USA will be spending the next 3 decades trying to work on a hypersonic missile.

Once they have paid off their multi trillions of debt, they might just do it. By that time, China and Russia will be doing Warp speed, lol.

The criminal enterprise known as the American government will simply purchase this technology, one way or the other, or steal it. It won’t take them that long to catch up.

The system with the most stupid name wins!

Call me AL
Reply to  Selbstdenker

Ask yourself why would the US need such shit as Zion dog shit that can’t hit S-200 missiles nor any good missile? 200$ Hamas rockets…China/Russia/Iran fuk the US. Zion State doesn’t have much land and Hamas still find holes to hit Zion…not saying 100s other shit about that shit.😂

Its futile. Iron Dome is not suited against high supersonic and hypersonic threats.

Americans never imagined that anyone would ever shoot anything at them but now it is becoming a reality. It’s an interesting reality

Haha pathetic they have no air defense against Cruise Missiles, yeah soon as you spot one use ur F-18 Hornets. haha. Disgusting people. We have the strongest military in the world, ups, hmm, how can we shoot down a cruise missile. ANYONE?

Yep suck the suckers dry and turn out a product like the flying brick, maybe they can shoot down all the UFO’s which is the latest scam.

The US basically paid for Iron Dome – they may as well use it.