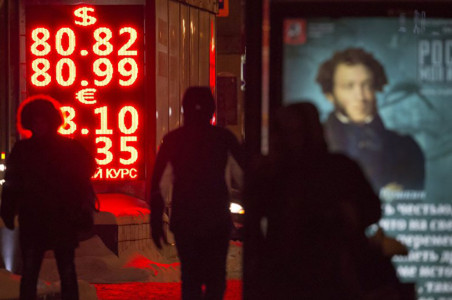 Barings hedge fund analyst Matthias Ziller believes that Russia’s economy is demonstrating remarkable resilience and that the country has no reasons for concern. In spite of the fact that the entire world is gripped by economic instability and oil prices remain low.

He is not the only foreign expert who believes that Russia’s economy not not at all been torn to shreds, contrary to Obama’s boasts.

Matthias describes Russia’s economy as unsinkable. I usually treat such expert opinions with indifference or caution. I can’t help but feel that someone is trying to lull me into a false sense of security, whereas I, with my innate habit to live among enemies, always try to discover the trap.

But it would seem that all is in order here, and Matthias Ziller is not carrying out someone’s secret order to disinform and demobilize Russia’s society using a newspaper that is little known in Russia. Still, it is quite interesting what he said in his interview. Here one more of my innate qualities comes through: to trust foreigners more than domestic experts.

And Matthias said that Russia, in actuality, is benefiting from low oil prices because they drove Russia to become much more self-sufficient. That the stability of the economy was bolstered by the Central Bank’s 2014 decision to stop intervening in the currency market and allow the ruble to depreciate. That Russia at the moment does not have a dire need for foreign investment, since the country’s own basic capitalization has reached a fairly high level. That the import substitution strategy is gradually yielding results: apart from “russifying” car production, there also exists enormous food production potential. That Russia still has a positive trade balance, in spite of low oil prices.

Everything he lists might as well be taken from the standard list of arguments used by Russian state officials or pro-Putin bloggers like myself. Which is why it elicits suspicion that a trick is being played on us. But what kind of pro-Putin blogger is Matthias Ziller, anyway?

I look around, and see another manifestation of import-substituting Russian officials, in the person of Forbes observer Tim Worstall. Who explained to his American readers the benefits of the falling ruble using arguments similar to what Ziller conveyed to his German readers.

According to Worstall, in a situation where a country which is as dependent on oil and gas exports as Russia is confronted by a drop in prices, its economy badly needs to be redirected. The country must produce more manufactured goods which previously used to be imported.

“Weakening the currency just happens to facilitate that,” Worstall writes. “It makes imports more expensive, which reduces the amount of imports. Domestic manufacturing becomes more advantageous and so it expands. Moreover, exports not related to oil and gas become less expensive. It’s just what the doctor ordered.”

After such encouraging words, I am no longer following the currency markets with worry but rather with detached curiosity. I, just like other Russians, had to forgo foreign trips at my own expense, and I don’t need dollars and euros for anything else. So exchange rates became something abstract, not connected to me personally, like the oil price. I also don’t buy oil or sell it.

If the previous analysts discuss the unsinkability of our economy, the well-informed Stratfor is concerned with other problems. Related, by the way, to our economic problems.

An expert for that private intelligence and analysis firm Steven Hall wrote an analytical piece in which he overturns the well known thesis: a sharp drop in oil prices, combined with Western economic sanctions, will provoke unprecedented economic and social upheaval in Russia, which will threaten President Vladimir Putin’s government.

I would say that he refutes it with a sense of regret. Because as late as last year Hall was a career CIA officer where he oversaw intelligence operations in former Soviet states and Warsaw Pact countries. It means that we can’t very well expect him to worry about our economic problems. Hall is our enemy.

In his view, journalists analyze Putin, Kremlin, and events in Russia from an overly Western prespective. They are excitedly discussing the recent truck driver protests, anti-Putin rhetoric by Russian opposition bloggers, and even the still not concluded Nemtsov murder investigation. Some observers claim this indicates instability is on the rise in Russia.

“In reality the president’s power remains as great as before, and the respect he enjoys among Russians is likewise high, despite circumstances which might have ended the political careers of most Western leaders,” Hall brings his audience and, what’s more, our liberals, down to earth.

This Russia expert points out certain peculiarities of our mentality.

–Russians are proud of having to suffer (an interesting characteristic which may be found among other Slavic cultures, but almost absent among other nations). When the Russian government explains the reasons behind economic difficulties in nationalistic terms and places the blame on foreign forces such as the US and EU, the necessity to suffer and become used to the deficits practically becomes a national sport.

–Russians have traditionally preferred stability to what they call “chaos” of genuine democracy. The majority of Russians are ready to sacrifice that which Westerners consider their inalienable rights in the name of stability, even if it means shortages of goods, services, and limitations on freedoms.

I read Hall’s analysis with interest. And was pleased to note that he, first of all, is not always correct in his assessments, and secondly, he could not beat the temptation to remind of the familiar irritants–Pussy Riot, Anna Politkovskaya, Mikhail Khodorkovskiy, Aleksandr Litvinenko, and the already mentioned Boris Nemtsov. If Western journalists and experts continue to listen to the arguments of this dyed in the wool intel man, they will continue to err in their future publications calculated for the Russian reader or for their own governments.

Hall, moreover, attributes too much importance to Russian special services, always ready to suppress protests sentiments as soon as Putin snaps his fingers. “Putin will not hesitate to use intimidation and coercion to support the opposition,” Hall claims. He cites murders of politicians and journalists as proof which, in my view, reduces his level of analysis to that of an amateur.

“To fully assess the prospect of Russia’s destabilization, one must first of all view the world and, more importantly, Russia, from Russians’ perspective,” Hall declares. But in many ways he could not force himself to reject the Western view.

And I am glad to see that.

But if our liberals or Western analysts will seriously want to delve into the phenomenon of Putin’s near-total support by the Russians in spite of economic problems, I would recommend him read Roman Nosikov’s wonderful article titled Rio-Rita’s Last Notes.

Like many of us, I think, Roman was forced to listen to the opposition’s trolling which only elicited our disbelief:

And here’s how he replied.

“Do you remember, my dear liberal fellow citizens, the decade of ’00s, all of you were chastising us for trading freedom for prosperity? We could never understand what kind of freedom you were talking about, we still didn’t understand that what constituted our slavery was also your freedom.

You believed that the trade revealed our slavish, consumer inner core and our inability to follow high ideals. And yet, as soon as we had our bite to eat, many of us felt sadness, a sense of internal decay. Something was not quite right among that prosperity of ’00s. We couldn’t swallow what we bit off.

But now we have experienced relief. Because now everything is in order. The earlier time, the ’00s, was a rare anomaly for our country and our people–calm, prosperity, and relaxation. What we have right now is the norm. And we calmly abandoned that well-being in return for a purpose.

A dead, stagnant soul–that’s what is terrifying.

But all of that is now behind. It has passed. It doesn’t threaten us anymore. A flame has been lit and kindled in the eyes of my fellow countrymen, a flame akin to a church candle, and to the Eternal Flame, and the flames of the Labor Union House in Odessa.

Crimea is ours. So is our destiny. Our life. Our truth.”

Maybe it is heavy on pathos, but it’s also accurate. The most important point which CIA’s bigwig Steven Hall missed is that even if in the very beginning we were forced to choose between Parmesan and Crimea, the majority of us would have chosen Crimea. Which completely flies over the heads of our liberals and Western experts.

Maybe unsinkable but certainly not indestructible and not radiation proof.

Nor is the US radiation proof and it can be obliterated. Dangerous to play with or threaten the russians.