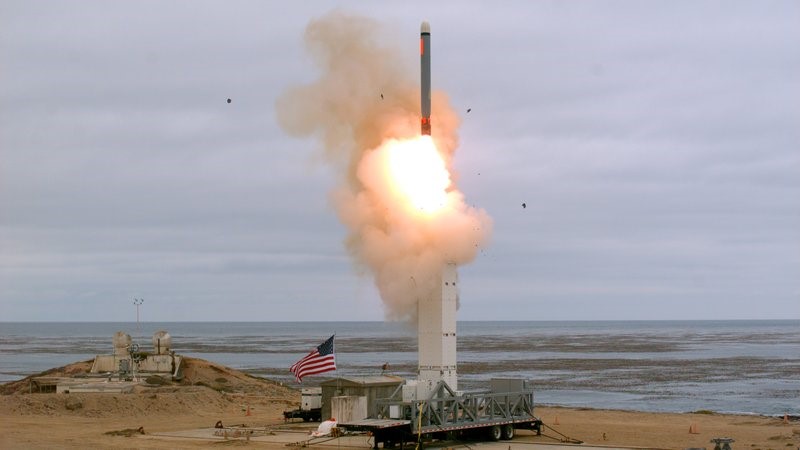 Written by Brian Kalman from SouthFront Team. Brian Kalman is a management professional in the marine transportation industry. He was an officer in the US Navy for eleven years.

Today the United States signaled to the world (again) that it does not respect international law, desire peace, nor does it recognize the hypocrisy put on full display by its actions. Perhaps more irresponsibly, and I would dare say with blatant dishonesty, the mainstream media does everything in its power to either obfuscate or frame the story so as to misinform its audience. The main stream media has once again shown that its intention is not to inform, but to pedal a narrative that is in the interests of the military industrial complex and the entrenched political elites that serve it.

The Associated Press ran a brief article asserting that:

“The U.S. military has conducted a flight test of a type of missile banned for more than 30 years by a treaty that both the United States and Russia abandoned this month, the Pentagon said.

The Trump administration has said it remains interested in useful arms control but questions Moscow’s willingness to adhere to its treaty commitments.”

Let’s be honest, both Russia and the United States have had the technology and the guided missile systems in service to field the intermediate range land-based missiles prohibited by the INF treaty. Both field such systems on their naval warships. The only thing that kept them from fielding such weapons was the INF treaty itself. Now that formal framework of prohibition is gone.

Now that we can acknowledge the fact that the INF Treaty no longer exists because the United States unilaterally abandoned it, let’s take a look at the missile that the U.S. military tested.

“The Pentagon said it tested a modified ground-launched version of a Navy Tomahawk cruise missile, which was launched from San Nicolas Island and accurately struck its target after flying more than 500 kilometers (310 miles). The missile was armed with a conventional, not nuclear, warhead. Defense officials had said last March that this missile likely would have a range of about 1,000 kilometers (620 miles) and that it might be ready for deployment within 18 months.”

So, the U.S. military launched a land-based version of a missile that has been in its inventory (in one variant or another) since 1983. The Tomahawk Land Attack Missile (TLAM) has been more widely used than any other U.S. cruise missile and in every major U.S. initiated conflict since the Gulf War. It was not prohibited by the INF treaty, because it was always based on U.S. Navy warships. Russia has pointed out (for decades) that the TLAM could very easily be adapted to land-based use. These concerns were met with U.S. denials and dismissed for decades. Well, Sunday’s test just gave credence to Russian concerns.

It is also important to point out that the U.S. officially abandoned the INF treaty on August 2nd. The U.S. then test fires a land-based intermediate range cruise missile on August 18th, a mere sixteen days later. Are we all to believe that the United States did not possess INF treaty prohibited missiles prior to August 2nd, and only developed and test fired one on Sunday? So the overly bureaucratic U.S. military weapons acquisition process and bloated and corrupt defense industry somehow put all this together in sixteen days? No folks, the Tomahawk LACM has always had the capability of being land based and could always be adapted to violate the INF treaty at short order. Armed UAVs in the U.S. inventory starting with the deployment of the first MQ-1 Predator in 1995, have all arguably been in violation of the INF treaty as well. 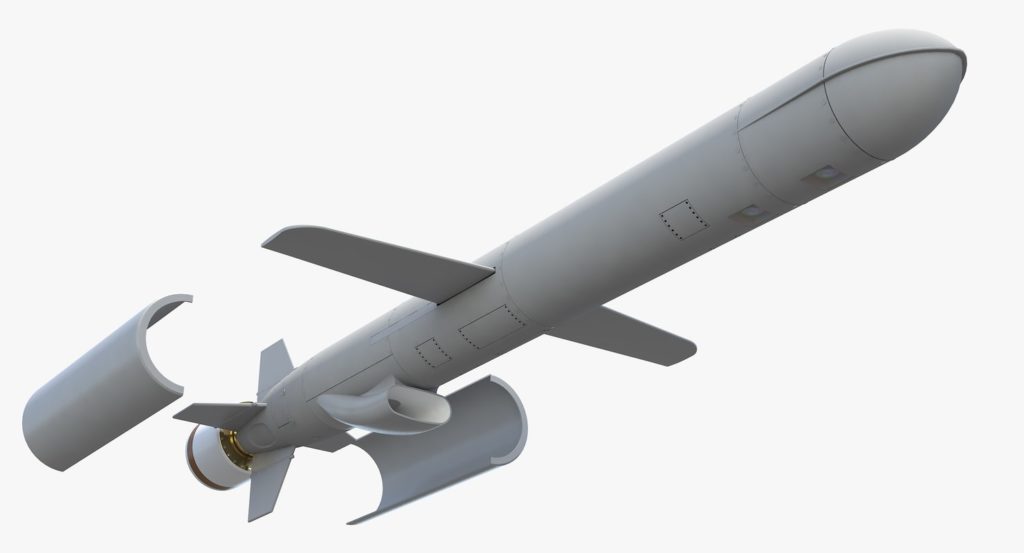 The Tomahawk Land Attack Cruise Missile has always had the capability of being fielded as a land based, nuclear armed, intermediate range guided missile.

Once again, the United States has clearly and irrevocably declared to all nations, most importantly those that might entertain signing an arms prohibition treaty, that it does not honor such treaties. It has also proven beyond a shadow of a doubt, that the Aegis Ashore ABM facilities based in Romania and Poland can in fact present an offensive threat to Russia. The first Aegis Ashore facility in Deveselu, Romania became operational in May of 2016. A second facility based in Redzikowo, Poland is slated to become operational in 2020, after considerable construction delays. These anti-ballistic missile launch sites have been marketed as defensive in nature, yet they basically use the same Aegis system employed on U.S. warships. Consisting of a Mark 41 vertical launch system that can launch the Tomahawk LACM as well as many other missiles, and a SPY-1D(V) search and targeting radar, these sites present a major threat to Russia. The Tomahawk LACM was designed from its inception to be capable of  carrying a nuclear warhead. 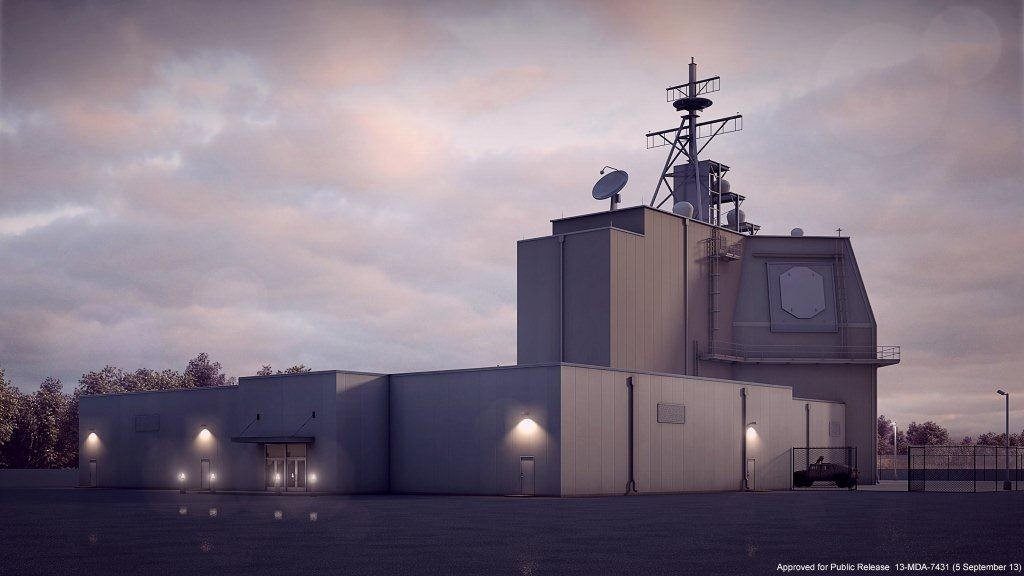 The wonderfully uncritical AP article closes with the following statements:

“Defense Secretary Mark Esper said this month that he hopes the Pentagon can develop and deploy INF-range missiles “sooner rather than later,” but no specific timeline has been announced.

He disputed the notion that abandoning the INF treaty will spark an arms race.

“I don’t see an arms race happening here,” he told reporters on the day Washington and Moscow withdrew from the treaty. “Russia has been racing, if anybody, to develop these systems in violation of the treaty, not us.”

So despite a mountain of evidence and all logical arguments to the contrary, the Associated Press simply prints the false and delusional assertions of the Pentagon. How truly blessed we are in the United States to have such a free and unbiased press. Move along, nothing to see here.

The Trump administration has finally signaled beyond a shadow of a doubt that the U.S. military has always possessed weapons systems in violation of the INF treaty, and has the ability to field these weapons directly along Russia’s European borders. So, President Putin and the Russian MOD were in fact correct, their fears were always warranted. It may be a cold day in hell before any Russian leader, let alone a Chinese or North Korean one, ever makes the laughable mistake of signing a weapons prohibition treaty with the United States in the future.

While the U.S. military industrial complex toasts to the future profits now available with the abandonment of the INF treaty, Russian engineers will be turning out their own competing weapons systems and countermeasures. China and North Korea will remain steadfast in their commitment never to relinquish any of their missile technology or nuclear deterrent capabilities nor tie them to legally binding prohibition. The Bulletin of Atomic Scientists are busy moving the minute hand a little closer to midnight while Lockheed Martin salivates over impeding profits and U.S. Air Force generals dream of the increased power and prestige soon to come their way. So much for the dream of peace in our time.

should allow comments on your telegram posts…

so whats new to the Story….. the jew slave states cant be trusted…. what a fucking surprise!!!!

the world smaller.. take a wild quess which one it will be.

Russia will be smaller.

Oh yeah, I absolutely will…

Because their economy is on the brick of collapse like the Soviet Union, Ukraine has double GDP growth than Russian Federation. It’s not sustainable to have 100 billionaires in a single city, that suck the resources of an entire country.

Their economy is weak, very weak, but not the same situation as in USSR. I lived in that time, i can compare.

The Russian economy grew with 0.5 in the first semester of this year, it’s a clear sign of recession. Moscow is the city with the most billionaires on the world, and by simple logic, that means the rest of the country is poor, and anyone can search on google images photos from small Russian towns. USSR didn’t collapse because of many minorities but because corruption of the system and by the last Severodvinsk event comparing to Chernobyl and Ufa it looks like they can’t learn from their own mistakes.

Sure each development has stopped. Putin is exttremly weak in the economical sphere. You are right also in that point, that russians do not learn from the history, from their mistakes. I was in Archangelsk, Murmansk this year. Like in the Brezhnev times. Only some newer cars. But the rads, buildings … :((

Despite these facts there are no centrifugal forces. And this is good. Beacuse of the weapons of mass exctinction.

This two cities you mentioned look supercool comparing to the small ones nobody heard about, sometimes i use google street or earth to watch photos and some have apocalyptic landscapes

What makes me angry, the last lies about nuclear rocket failure.

– again several days lied, that nothing happened – then lied, the radioactivity was elevating (20x), but only for half an hour – the citizens are in panic and bought all iodine supplements (is not helpful) – did not tell for doctors, that the injured people suffer from irradiation – first they moved the patients in moscow, later (probably too much or too injured) transfered 1 mobile irradiation diagnostizin lab in the suffering region – in the muscle of patients found elevated 137Cesium

and the las, but not least lie: suddenly 4 radioactivity monitoring stations stopped the sending of data. allegedly beacuse of communication problems. Nice! One of these is DUBNA!!! DBUNA!!! The mecca of russian nuclear research. And communication and internet problems. SURE! :DDDD Filthy animals are the russian politicians, nothing else. From Chernobyl until today nothing changed. Lies, lies and again lies! They are killers of own citizens. And are surprized, why nobody want them.

I feel sorry for the smart people in Russia that are forced to migrate because these extremists vote corrupt politicians sponsored by oligarchs that suck the blood of their own country, while they are happy that their flag is waiving over Crimea and Donbas and they literary can’t have decent medicine and social services in the most resources rich country in the world.

The entire World’s army against Russia and China, Russia would win, did you know this ?

It was rather obvious that they would do this though, that is why they withdrew from the INF treaty.

Too late on Hypersonic technology, Russia have already dispatched hypersonic missile with their troops. The chineese are working hard and are trying successful tests, soon the army will be equipped. For the US the truth is that they are truly panicking, they dont know how to get that tech, and they cant figure out how Russia did it. Reminder: the US still purchases their space rockets engines from Russia (RD180) till this day, they do not have the means nor the knowledge to match the russians when it comes to rocketery. Since the US imported nazi scientists are all 6 feet under, the new generation cant keep up with that the previous guys accomplished. Russia on the other hand have plenty of knowledgeable scientists, and those replenishes in Russia and not in Degenerated America. Needless to speak of the H2 visas that were suspended, making talents harder to attract.