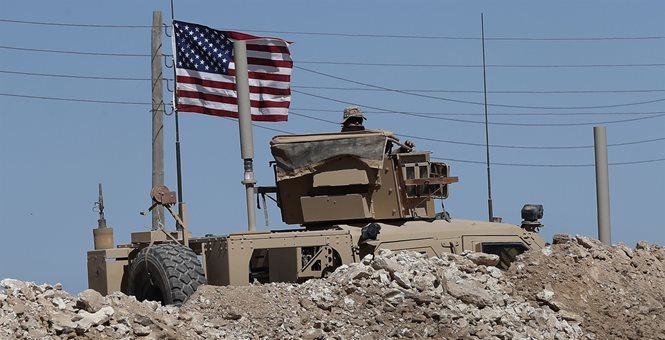 The loss-averse President Donald Trump, who campaigned on a platform to “defeat ISIS, sought to uphold his election-season slogan by declaring “historic victories against ISIS” as a reason for his Wednesday decision to end US military presence in Syria.

Amidst the steady gains of the Syrian army, which has reclaimed land from ISIS and various rebel factions since 2016, Trump has sought to market the destabilization of Syria as a success in his presidency.

Though US military withdrawal is always a cause to celebrate, a steady geopolitical undercurrent shows that the move only represents a shift in strategy in loss minimization for the Gulf-Israel-US axis in the Middle East.

The decision was decried by right wing war hawks, such as Lindsey Graham and Marco Rubio–as well as many Hollywood liberals pinning it as evidence of alleged Putin-Trump collusion.

As Trump pulls troops out of Syria, we must acknowledge the enormity of the world’s failure to halt a humanitarian catastrophe . U.S exit benefits Russia, ISIS – still active, Iran & Assad. Was this agreed to during Putin/Trump’s 2 hour Helsinki meeting- without witnesses?

The Syria Democratic Forces urged the U.S. to not withdraw, warning that the cessation of support and presence will have “serious repercussions” that will “create a vacuum” in the region.

The withdrawal represents a loss in regime change objectives from the US and its allies, something the US envoy to Syria James Jeffrey explicitly has said the country is no longer interested in, coming soon after Syria regained over 90 percent of its territory.

In September, it was revealed that Israel, in cutting its losses, stopped arming and funding rebel groups that reports disclosed they were secretly supporting for years. Like its Zionist ally, the US too has decided to cut its losses and not further rock the boat between itself and Turkey.

Military failures and excessive expenditures have made direct war campaigns highly unpopular for the US following Iraq and Afghanistan. Since then, the US’s strategy post-war on terror has been to pursue more covert strategies.

These have been carried out through proxy wars, support of Western-backed rebel groups, media censorship and manipulation, and maintaining or increasing support and funding to NATO and GCC allies and Israel.

The US has supported the YPG in hopes of utilizing the separatist faction as a proxy and reliable alternative to other rebel groups , helping it gain territory and grounding against ISIS in Syria. This has put it in conflict with Turkey, who considers the YPG a “terrorist” group. While the US has more faith and assurance in the group  as a reliable and long-term proxy ally, Turkey has long harbored deep antagonisms to the groups separatist ambitions.

The disagreement has prompted a deal by Turkey demanding that the US withdraw SDF (Syrian Democratic Forces) presence, an alliance led by the YPG,  from the Manbij by the end of 2018.

Both the US and Turkey hope that the tides will turn in NATO favor, Turkey plans to launch an operation against the Kurdish group soon, forestalling a complete territorial liberation and victory for Syria, and expected to prolong at least some US military presence in the country.

The second condition for US presence in the country, aside from the pretext of ISIS activity, is the stronger subtext of countering Iran’s allies.

Meanwhile, the ceasefire over Yemen has garnered similar reactions that applaud the US for supposedly pulling back on its campaigns of violence in yet another part of the world.

When the US Senate voted last week to end US support of the war in Yemen, passing 56 to 41, a buried provision of the House and Rules Committee’s “Agriculture Improvement Act of 2018 would block any vote or further discussion of the US involvement in the war in Yemen.

On Thursday, President Trump signed the bill into law. 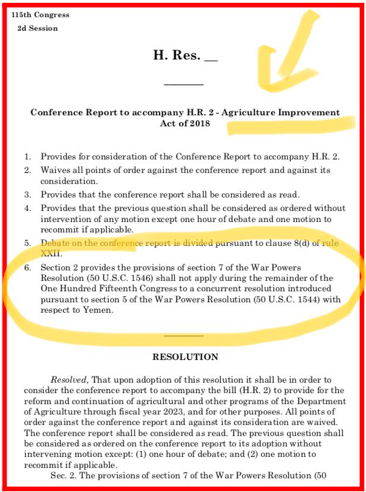 The US push for a UN brokered ceasefire in Yemen, like its withdrawal in Syria, comes after 4 years of incurred losses by the US-backed Saudi coalition after a devastating siege and blockade beginning in March 2015.

The ceasefire is pushed amidst continued aggression against Ansarullah forces in the past few days, including the US-Saudi launch of warplane raids against the Sana’a international airport.

Attempts at holding to the ceasefire continue to be impeded diplomatically and militarily by Saudi Arabia and the US, continuously reneging upon the agreement that it only hopes will disarm Yemeni forces, and thus, wage an easier final offensive against.

The U.S. and Saudi Arabia also hope to malign the terms of the truce to specify condemnation of Iran as allegedly playing a role in prolonging the conflict. The draft resolution, under US pressure, now condemns both Iranian support and “unmanned aerial vehicle attacks by the Houthis against neighbouring countries.”

Russia has rejected the draft resolution on these terms.

Despite the language,  the Yemeni popular forces agreed to respect the terms of the ceasefire, responding only to foil the aggression launched by the Western supported Gulf coalition.

Yahya Saree, brigadier of the Yemeni armed forces, said that the Yemeni army and popular committees are “committed to the cease-fire in Hodeidah,” complicated by the recurrent US and Saudi violations.

The army spokesman added that more than mortar shells have been fired at Hodeidah’s residential areas in violation of the ceasefire, including the US-Saudi launch of 26 airstrikes across various locations in 24 hours.

Meanwhile, the US has refocused its efforts on both confronting Iran directly via soft power through sanctions and dealing with Israeli pressure to take action against Hezbollah in Lebanon.

Last week, the US rejected Israel’s request to sanction Lebanon after the Zionist state began operations to destroy cross border tunnels on its side off the border.

Though Saudi Arabia and Israel have been intensely pressuring Lebanon to target Hezbollah in Lebanon, the US is reluctant to take further action, as a supplier of foreign and military aid to the country and its armed forces.

On Tuesday, the US expressed its ‘deep concerns” over its supposed growing political as well as military influence, condemning its allies in Lebanon’s government for giving it “cover” and “a veer of legitimacy.”

Across the Middle East, the US is reluctant to expend much more effort in direct involvement or combat–yet it does not signal willingness to stop its support of its allies in the region.

“””Across the Middle East, the US is reluctant to expend much more effort in direct involvement or combat–yet it does not signal willingness to stop its support of its allies in the region.”””

How is US supporting Israel by withdrawing from Syria? By selling them F35’s? When Russia gave Syria the green light to strike the back against any foreign attacks, US knew its charade was over, unless they wanted to get involved in Syria far more heavily. Trump said no, and told the Pentagon and the other chicken hawks to get lost.

If it was purely Russian strategy to never let Syrians shoot down planes of fukusis ,then Bravo.It seems to have worked.

Also ,america ,i find you give a veneer of legitimacy to child -headchopping Islamicists ,by forcing Canada to resettle White Helmets there!

By selling them F-35i s…… a totally different spec and of course delivered first.

Not necessarily of different specs, Lockheed has the ability to remotely switch many critical aspects of the avionics, rendering the plane as a clumsy generation 3 rendition.

IT IS A DIFFERENT SPEC. End of.

PS Fuck me, you are born tomorrow (name !!) – happy Birthday.

Saudi Arabia asked for and obtained UN observer rapid deployment in Hodeida. We will see who don’t respect the truce… first step of swedish agreement (the second is houthi militia leave the town and let UN manage the port).

The agreement is a set up, giving control of the port to the UN will make it much easier for Saudi Arabia and the UAE to take shortly after, the UN is a paper tiger and everyone knows it.

What a vile nation the US is and has always been. Mentally unstable and brainwashed people longing for war anywhere and everywhere, just to show their dominance (despite their real inferiority) – must be eliminated.

On a totally different note; this Lindsey Graham creature is a bloke !!!!, I always thought he was a bird with that name – what is happening to the World ? …..

I found this, I hope you can see it……..http://archive.li/RnzQe