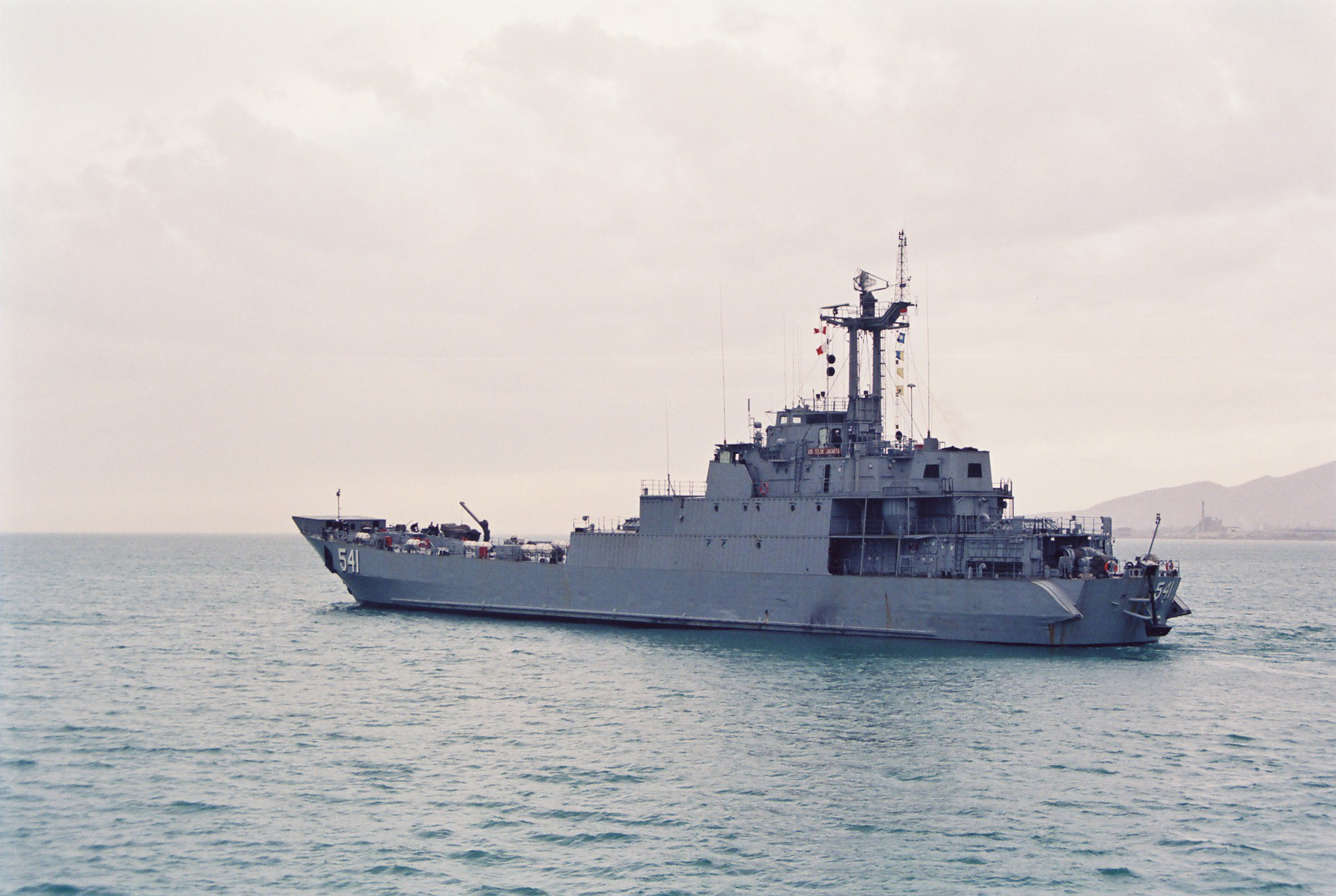 The Indonesian Navy said in a written statement that the vessel had sustained a number of leaks before finally sinking.

“The sea waves [near the ship’s] location were 2.5 to 4 meters high at the time,” the statement read.

All 55 crewmen have been rescued by nearby civilian ships – KM Tanto Sejahtera and KM Dobonsolo.

They are due to be transferred to KRI RE Martadinata, which is bound for Surabaya, according to the Navy.

Teluk Jakarta reportedly left Surabai on July 12th to carry out the routine task of delivering supplies to naval facilities in eastern Indonesia.

On July 14th, during a storm the ship sprung a leak.

The flow of water could not be stopped, and soon the ship lost speed due to flooding of the engine room and sank at a depth of 90 meters.

Teluk Jakarta is a former ship of the German Democratic Republic Eisenhüttenstadt fleet built in 1979 and one of the 12 Project 108 medium-sized landing ships (Frosch I) built by Peene-Werft shipyard in Wolgast.

In 1993, after the reunification of Germany, these 12 ships, together with two Project 109 supply ships (Frosch II) built on the same hull, were acquired by Indonesia.

Of the 12 units, to date, the Indonesian Navy has already lost one – the Teluk Peleng (tail number 535), which hit a concrete pier in November 2013.

In addition, the Teluk Berau (tail number 534) was decommissioned in 2012 and then sunk as a target of one of the Yakhont supersonic anti-ship missiles acquired by Indonesia from Russia.

Various accidents remain the scourge of the Indonesian Navy – in particular, in September 2018, the Rencong missile boat caught fire and was entirely destroyed.

In December 2017, in the Strait of Malacca, a Sibarau patrol boat sank into a storm after engine failure.

In May 2016, running into the hull of a sunken ship, an accident occurred in Sumatra and sank the corvette Pati Unus.

In September 2012, in Banjuangi just before testing, the Klewang whole-composite missile trimaran of the X3K project, caught fire and sank.

Several boats of the Indonesian fleet in recent years have been lost due to hurricanes.

They have thousands of islands and a corrupt government. Indonesia has mega problems at home and that is why they could not even hang on East Timor and West Papua is slipping away and the rusting ships are the least of their problems. The only modern equipment are the Russian SU-30MK2 but they are having a hard time keeping them in the air as they had to ask Belarus to upgrade the old SU-30 MKK. Indonesia is seriously lacking in educated manpower and engineer, for a country of 270 million. They need to lease some of their ports to China and Russia to improve their navy. Kissing Americunt arse has not helped at, as they lost East Timor as their Americunt masters backstabbed the idiots and backed Aussies who now have all the Timor Sea oil. Much like what Erdogan is doing in Libya and Mediterranean..

” Much like what Erdogan is doing in Libya and Mediterranean..” Erdogan will have a bad ending, and Turkey will be divided. Remember my words.

There is an inverse correlation with Sunniism and education. It serves them right for getting rid of Sukarno and becoming more islamic.