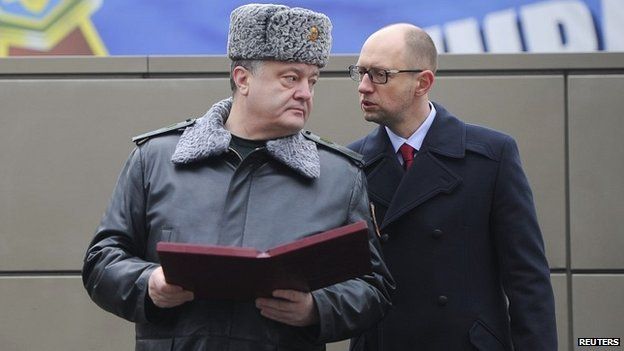 Originally appeared at A-spectо, translated by Borislav exclusively for SouthFront

After what happened at the World Economic Forum in Davos, we can safely accept that Ukraine is no longer a nation state, but simply a territory. The only thing that’s left, is for the United States to add it to it’s other territories because it is still early to accept it to the family of American States. Before the meeting in Davos the “multinational” leadership of Ukraine boasted about the great eagerness of Western investors who await their delegation to the forum. President Poroshenko and Finance Minister Yaresko raised the hopes of the population with the promise that they will surely return from Davos with at least two good news.

One of them, according Yaresko is the announcement of the exact figure of the large number of foreign investors (presumably around 41 000 companies) who are expected to immediately start investing in the economy of Ukraine, once the meeting in Davos is over. The second good news is that people will know the exact amount of the yet another new credit loan that the government of Ukraine will receive from IMF. The promise of the first good news seems to be very optimistic. It’s unlikely that there’s an investor who will agree to invest in a country where there’s a civil war, in which the government can not pay back what it borrowed, where corruption is widespread, the economy is controlled by some shadowy people, and where all key sectors of the State are undergoing catastrophic collapse.

With Yanukovych the GDP of the country still grew despite everything. Now that he’s gone it goes down by 10% annually. Businesses are closing, the economy is in a coma, exports have dried up, the currency is drastically devalued, the level of inflation in 2015 reached 46%. Besides this, some analyses, announced in Davos brought to light other unpleasant facts that will discourage any potential investors (if there is any still left), of their intentions to bury their money in Ukraine. For example, according to a study published in Davos by Global Competitiveness Report, Ukrainian banks are the most unreliable in the world. They occupy 140th place out of 144 seats in the rankings .

Apparently, it’s one thing to make bombastic political declarations and to receive enslaving credit, and another thing to risk your own money. The Ukrainians failed to find such a rare breed of investors at the forum and in the column of investments they got a zero. Further meetings with the official delegation of Ukraine continued roughly in the same spirit. The Finance Minister, Mrs. Yaresko, met with EU Commissioner for Economy and Finance Pierre Moscovisi, a “friend and partner of Ukraine”, according to her. Yaresko assessed the meeting as “pleasant”. Another meeting with the President of the Eurogroup Jeroen Dijsselbloem, Mrs. Yaresko described as “constructive”. The President of the Eurogroup declared a “substantial support for Ukraine,” according to her.

Against such “fruitful discussions” only the head of the European Investment Bank Werner Hoyer behaved a bit improperly, when he categorically stated even before his meeting with Yaresko that he will definitely not discuss proposals for investments and for additional financial assistance to Ukraine. Just as “constructive” were the meetings with the Minister of Economy of Ukraine Aivaras Abromavicius, with representatives from the US, EU and some transnational corporations. The conversations with them have apparently ended so disastrously that the Ukrainian delegation did not even deem it necessary to make a statement about their outcome, or at least to comment on the topics that are discussed.

Apparently already stressed out by the “black series” of events, President Poroshenko “correctly” considered that the Russians are guilty for everything and he decided to take action. At the breakfast of heads of delegations he came into sharp dispute with the head of the Russian delegation, Yury Trutnev. In the style of the Ukrainian Parliament, in which it is customary for deputies to use the “boxing right” as the main argument in disputes, he decided to apply the same practice with Trutnev. Here Poroshenko apparently over did it, as he had forgotten that he is without security and that Trutnev is a fifth dan in Kyokushin karate. NATO chief Stoltenberg watched the scandal without even a muscle flinching in his cold face. Fortunately, after the intervention of officials responsible for the order of the forum, everything ended fine. But let’s not be pessimistic.

There was one positive news that surely warmed the soul of Poroshenko. The Ukrainian delegation reached a preliminary agreement with IMF chief Christine Lagarde for a new lending. It’s true, that feeling joy because you took a high interest rate loan is a bit perverse, but such a loan is something when there’s no other good news. But something else is also true – in the financial and economic situation in which Ukraine finds itself in, the bank should have never lend it anything. And yet the IMF found a solution. Although not announced ​​publicly, it turns out that the loan will be granted on the assumption that “if the debtor is our man, there’s no problem if he does not return it.” This sudden generosity by Lagarde however, is not totally free.

The representatives of Washington at meeting with Poroshenko and Yaresko, bluntly notified them that the price of the agreed installment and future loans made ​​directly by Washington, will be payable by the implementation of additional control measures by the US government on the policy and economy of Ukraine. Not to be baseless, the Americans immediately offered to give additional credit of $ 1 billion to Ukraine, provided that general prosecutor Shokin is removed from his post. That would be taken by the State Department, as a symbolic gesture to initiate real change in the country’s politics. In simple terms, this is a purely political condition and disregards the sovereignty of Ukraine.

But this is clearly not enough to compensate Washington’s generosity. Just so nobody is aggrieved, the US Minister of Commerce Penny Pritzker, offered Yaresko and Abromavicius key Ukrainian companies to be headlined by American managers. Abromavicius himself told journalists: “They offered us their assistance in the selection of professional independent directors to lead our key companies”. The fate of the so-called. “key companies” is completely predictable. And total control of the United States on the Ukrainian economy for many years is secured. America has 50 states, one federal district (Washington) and several other “territories”. From now on Ukraine has nothing left but to ask the United States to join these territories.

The fulfillment of the two conditions above, will put Ukraine under the long-term financial, economic and political dictates of the United States . But this is not contrary to the attitudes of the Ukrainian elites whose main goal is assimilating the granted credit resources and preserving their power positions. The future of the country is already predetermined. Ukraine will continue to take loans and financial flows will flow to US and European transnational corporations. Actually the Atlantic community can be considered to have fulfilled their promise to accept Ukraine into the family of Western countries. The little surprise for the Ukrainians is that members of this family are not people, but hedge funds, banks and corporations, to whom Ukraine has to sacrifice everything which it owns, including it’s budget and its market.

The budget is needed to return the debts. The market is needed to accept the goods of American and European corporations. Ukraine can not hope for the reciprocal gesture of it’s partners . Today, the European market is still tightly closed for Ukrainian goods and companies. To the population and business in Ukraine remains the commitment to pay higher taxes to receive lower pensions and salaries, and to buy more expensive European goods. The consolation is that even though the Ukrainian authorities are incompetent, if nothing else, they are at least successful at working against the interests of their citizens.