The US pullout from Afghanistan is moving according to plan, while the Taliban are capturing district after district.

On June 21st, Taliban fighters took control of a key district in Afghanistan’s northern Kunduz province, encircling the capital of the same name.

Fighting around the Imam Sahib district began late on June 20th and by midday the next day, the Taliban had overrun the district headquarters and were in control of the police headquarters.

Dozens of districts have fallen to the Taliban since May 1, when U.S. and NATO troops began their final departure from Afghanistan.

The Taliban have taken several regions across the three northern provinces of Kunduz, Baghlan and Balkh.

Significantly, witnesses said the Doshi district in Baghlan province was in Taliban hands.

This means the Taliban have assumed control of the one road that links five northern provinces to the capital Kabul.

Government forces later claimed the recapture of the Doshi area, but the Taliban is still active in the district, capturing more areas and seizing more military equipment in bases left by national forces.

Similarly, to the Imam Sahib district in northern Kunduz, the significance of the captured districts often lies in their proximity to roads and major cities.

The Maywand district in Kandahar province fell to the Taliban after a tunnel bombing targeting the main Afghanistan Armed Forces base in the area.

The Taliban have circulated videos on their website and to WhatsApp groups in which they claim show government soldiers who have surrendered being promised to return to their homes and receiving money from the Taliban.

On June 20th, Taliban leader Mawlawi Hibatullah Akhunzada issued a statement ordering his soldiers to “treat those who surrender well and display good behavior with them.”

The Afghan Armed Forces, in response, continue their operations, but they have had limited success, despite reports of heavy casualties on the Taliban side.

147 Taliban militants were killed and 53 others were wounded as a result of Afghan Army operations in Nangarhar, Laghman, Uruzgan, Kandahar, Zabul, Faryab, Balkh, Helmand, Nimruz and Kunduz provinces just on June 20, according to the Afghan Defense Ministry.

Instead of gains in these provinces, the Afghan Armed Forces are losing ground.

Biden’s talks with Ghani will be their first face-to-face meeting.

The US leader is set to pledge diplomatic, economic and humanitarian assistance to Afghanistan to prevent it from becoming a haven for militants.

Meanwhile, Turkey is attempting to implement itself into the solution in Afghanistan, and assume control of Kabul International Airport, how it will potentially fare against the Taliban remains a mystery.

Any significant success is mostly unexpected.

20 years ago, when the yanquis and their euro-lackeys first rushed in, even the janitor who cleans my building could predict the Americans would be out with their tails between their legs and the Taliban would be exactly where they were before the ‘exceptional nation’ came in.

When simple, uneducated men have clearer sight than Harvard graduates and advisors to a superpower, one can tell that the superpower is about to crumble.

inshallah bro, a superpower that blocks other countries’ websites deserves no better

Yes, I recall the Indian magazines India Today and Outlook running cover stories of the puppet child sex slaver Quisling warlord regime tanks rolling into Kabul. I sent an email to Outlook asking if, on the inevitable day that the Taliban retook Kabul, they would have the honesty to do a cover story on that too.

They did not print the letter, of course.

This is what happens when you allow the British into your lands.

You’ve been saying that for many decades, the amount of attention you place on it shows your over confident reaction is a ruse to conceal your true thoughts, you would rather gloat out of your inferiority complex as you don’t understand the difference between reality and media.

I’ve parsed your words and concluded they are truly nonsense.

Your standard IQ deviation of 90 prevents you from understanding complex ideas, such as the fact that Russia and China are globalists too. You can’t work that out in your mind, you only think in black and white. You accept the kabuki theatre in front of you, whilst displaying a poor quality character.

Your standard IQ deviation of 90 prevents you from understanding complex ideas, such as the fact that I said nothing about Globalism, Russia, or China.

You can’t work that out in your mind, you only think in black and white. You accept the kabuki theater in front of you, whilst displaying inferior analytical and strategic thinking capabilities.

You must be the product of an American public school education.

Keep your hands off the Jews’ Z(C)IA’s poppy fields.

Raised by jewish grandparents, had jewish role models and jewish friends growing up. His career in the KGB was made possible because of a jewess mentor. 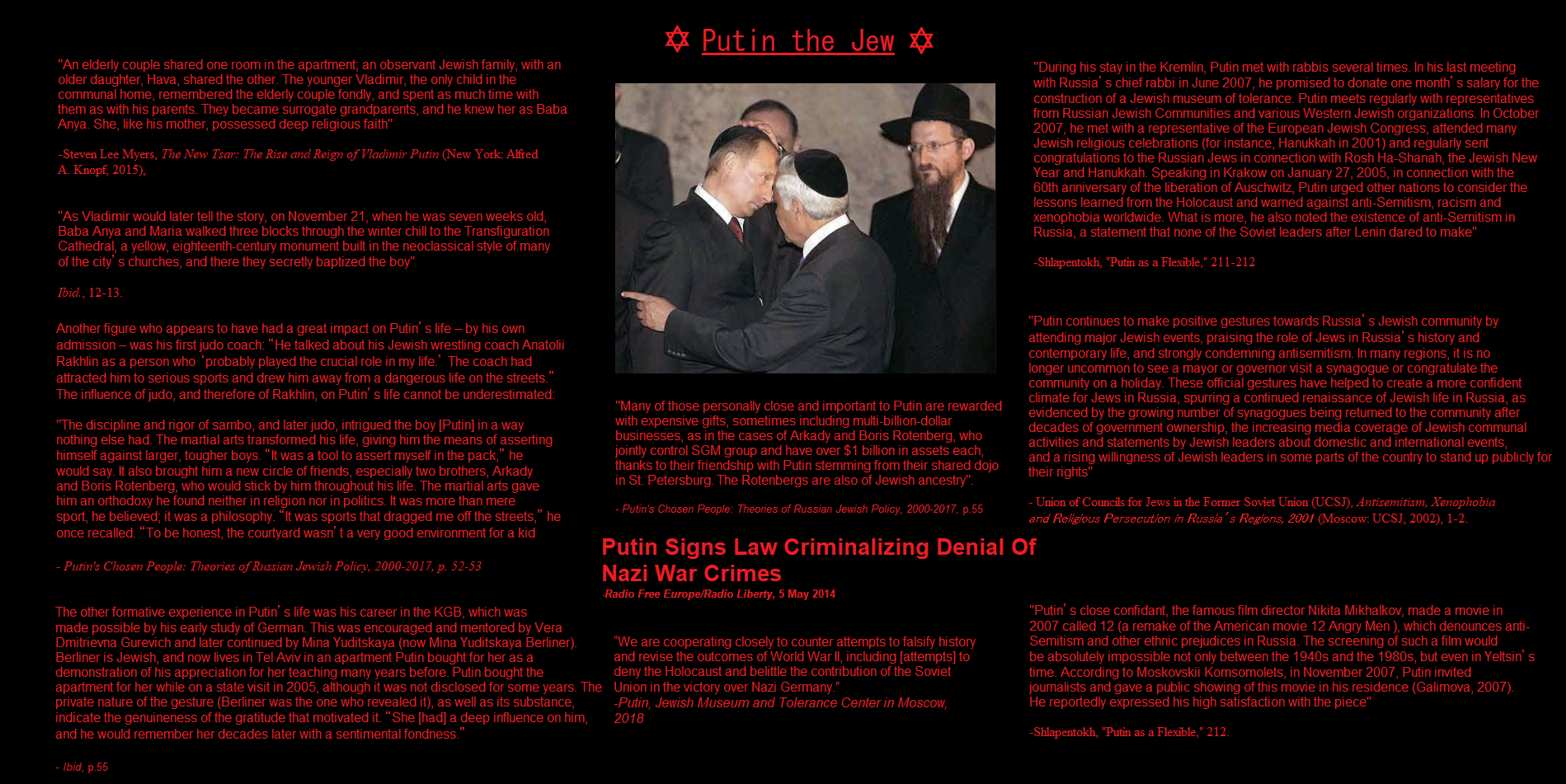 It’s not a secret. For those, who didn’t know – his mother’s last name is Shelomova (jewish surname), it’s even written in his official bio:

P.s. Take a look at this photo, see how similar V.P. looks to this jew from the beginning of the XX century:

Even a quick look at Putin’s features reveals a pure slavic structure. If you believe in that kind of analysis.

You’re probably some old conspiracy fart holed up in a one bedroom apartment waiting to die after retirement.

You have a persistent tendency to allow your leaders and their media apparatus to shape much of your worldview. Your perception of fictitious white supremacy derives from Communist misinformation conceived by jewish supremacists, the British et cetera were not these maniacal “racists” demons you seem to think they are. And Russia acquired Port Arthur (now called Lüshunkou District, in the city of Dalian) before losing it to Japan.

How the jews (Sassoons, etc) Destroyed China With Opium:
https://worldtruthvideos.org/watch/how-the-jews-destroyed-china-with-opium_IR1lgGvrMhkgpix.html

“Even a quick look at Putin’s features reveals a pure slavic structure. ”

1. He doesn’t have a “pure slavic structure”, Slavs are not a racial category.

2. Many jews do not have Ashkenazi features after marry gentiles for eugenics purposes, also to blend in more with the population.

3. Putin’s good friends with Chabad (Berel Lazar is the head of the Chabad branch in Russia) and donated an amount of his month income to the Jewish Museum of “Tolerance” in Moscow.

4. Anti-jewish sentiment is illegal in Russia. Putin banned holohoax denial and promotes rehabilitation of Stalin, while banning disagreement with the Soviet narrative pertaining to WW2. He lies about the “west” pushing this narrative, when in reality they also persecute those who present authentic evidence debunking the official WW2/holohoax narrative.

5. He doesn’t deviate from the Soviet globalist narrative and neglects to mention it has been admitted that the UN was established for world governance, the events of the 20th and 21st century owe plenty of similarities to the Learned Elders of the Protocols of Zion.

If you saw drug addicts eating from a plate full of bugs and other bizarre tastes in food, wouldn’t you see that as primitive?

Some of this racist Croatian’s (or another Balkan nation) top videos:
https://www.bitchute.com/channel/UlkQAbEvrP0M/

– Everyone should watch this!
* Fast forward to 1:30
– Hell On Earth (also Mankind and the Visions of Approaching Hell)
* Fast forward to 2:50
– Killing “Children” just for Fun
– Food for MASOCHISTS (Chinese restaurant crap)
– Politically “Incorrect” Joke #2 (a very funny one)
* Not so funny.

“You’re probably some old conspiracy fart holed up in a one bedroom apartment waiting to die after retirement.”

The video “Killing ‘Children’ for Fun” implies that many Chinese seem to lack remorse when they runover pedestrians, or become witness to extreme child abuse.

Dragun Glavasic (Galactic 74) is a bit rude by the way. 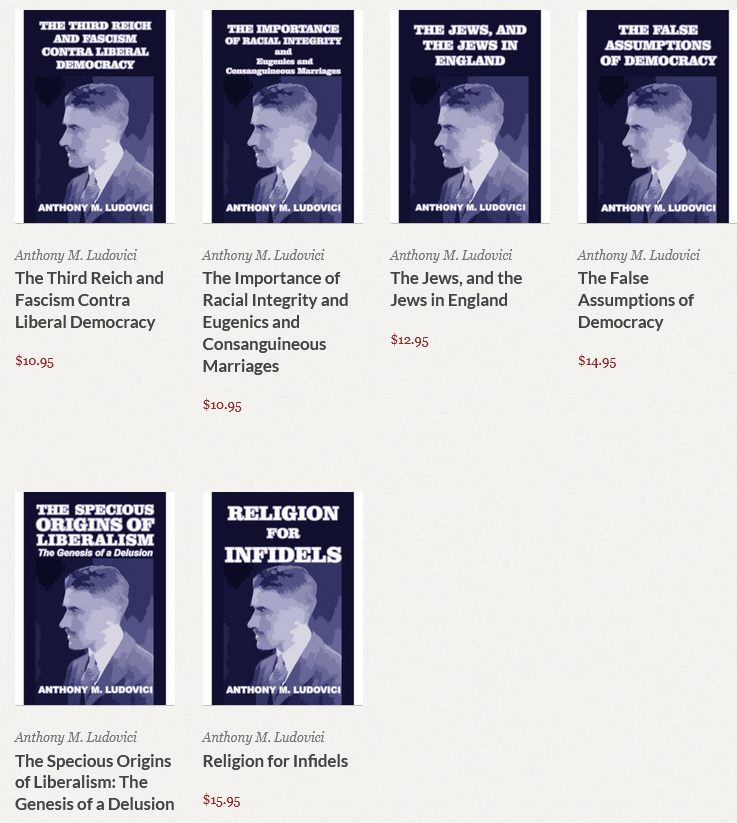 One of Dragan’s uploads, and far less biased than usual: 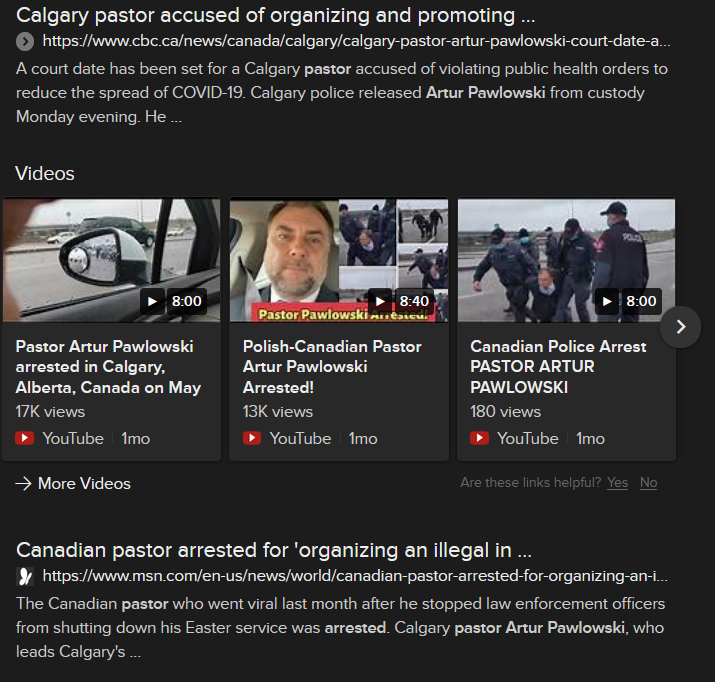 Your propaganda efforts are weak and transparent. Being a “jew” in part or otherwise does not automatically make one and extremist, satanic, zionist lunatic who drives over Palestinian children while they walk to school.

Perhaps you noticed that the Russian Armed Forces are in Syria. Along with the SAA & other regional allies they have destroyed any possibility of a future “kosovo” that the zionist imbecile lapdogs were tasked with creating.

This twitter feed gives almost hourly updates on the situation.

Significantly in North Afghanistan it is local Uzbek and Tajik fighters who now comprise the Taliban, not “foreign” Pashtuns from the South. The Taliban is no longer a Pashto speaking ethnic chauvinist movement. Twenty years of Amerikastani occupation has turned it into a pan-Afghan national liberation force. Even some Hazara are joining it now.

This is also a huge slap in the face for Proud Hindu’s gibbering globetrotting genocidal Gujarati gangster god Narendrabhai Damodardasbhai Modi, who’s gone from calling the Taliban “terrorists” to holding talks with them in Qatar.

modi is a clown of phenomenal proportions.

“A people that elect corrupt politicians, imposters, thieves and traitors are not victims… but accomplices”

Bashar first after I will go in Afghanistan myself

Hurry, please take selifie , I’d like to see as the Taliban rip your spine out through your mouth.

The defeat of the US in Syria is the most defining moment in US history. The end is now assured and there is nothing that can stop the collapse.

In addition they have reduced their presence in Afghanistan and Iraq. Accomplished nothing in Iran, Venezuela or Bolivia. Failed with their efforts of instability and chaos in the Donbass, Hong Kong, Belarus etc.

The list of british/american losses are endless these days.

Jew maggots are freaking out and rushing to join Chinas Belt and Riad, yep China is getting smarter a raid is better than a road when the sea is turning red, that’s not the flag out there its blood, suck it and see jew maggot China don’t want you collecting theid body parts and selling them down the line..