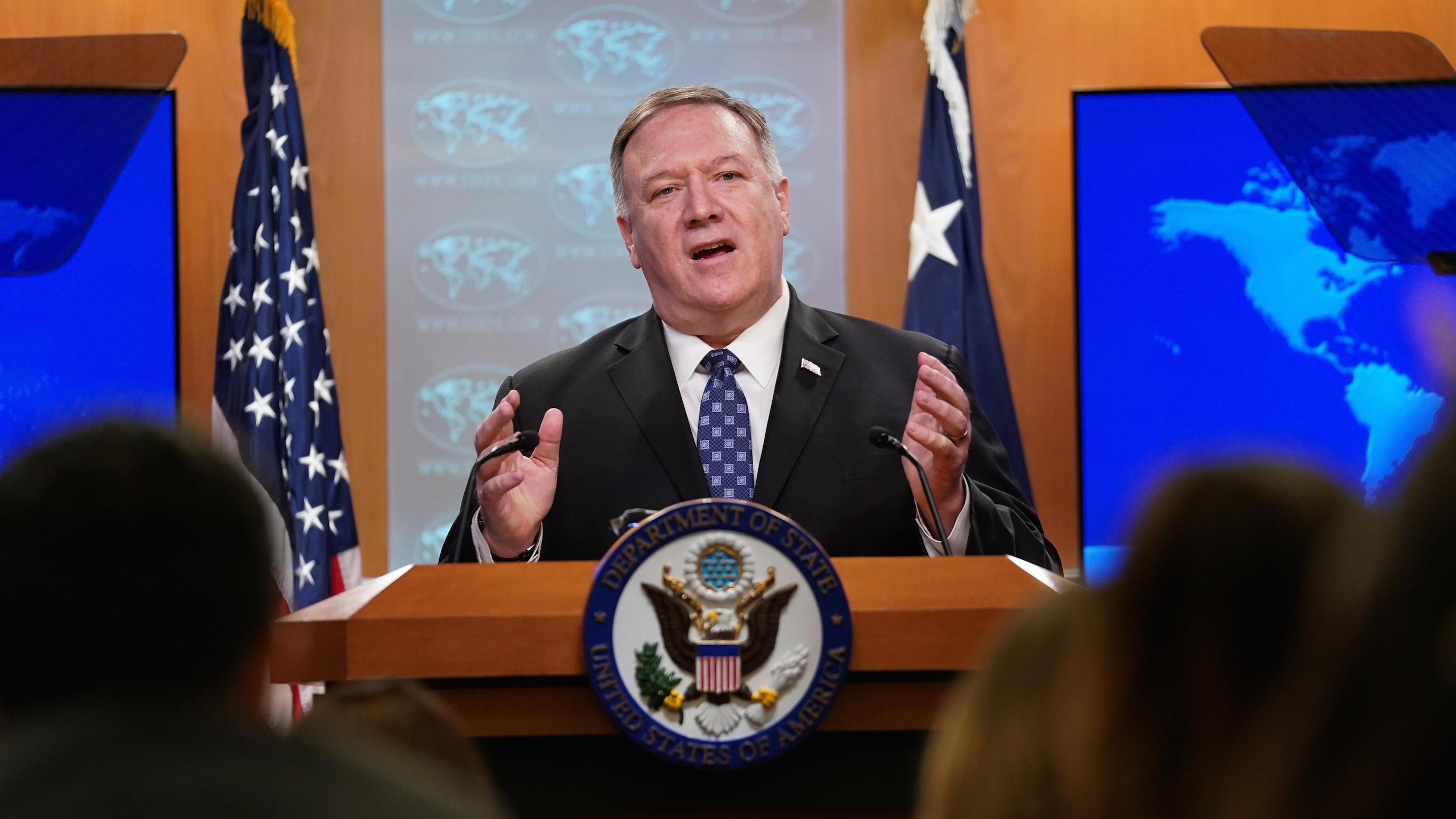 On February 25th, US Secretary of State Mike Pompeo said that the Syrian government wouldn’t achieve any military victory in Idlib, and that the offensive only increased the risk of a conflict with Turkey.

Pompeo began with “briefly” addressing the situation in Idlib, and the “Syrian regime’s brutal operation”, “cynically” backed by Moscow and Tehran.

He also alleged that more than 3 million people were displaced in Idlib, which is 3 times as much as the typical Turkish claim of 1 million.

“As we have said many times before, the regime will not be able to obtain military victory. The regime’s offensive only heightens the risk of conflict with our NATO ally Turkey,” he said.

According to Pompeo, the solution in Syria is a “permanent ceasefire and UN-led negotiations under UN Security Council resolution 2254” and the Trump administration is “working together with Turkey on seeing what we can do together.”

There could also potentially be another way to solve the crisis, such as Turkey not continuously supplying militants “moderate opposition” with equipment and not successively deploying troops at positions which are not observation posts under the Sochi Agreement, however, the time for that has passed and Ankara has vested too much into denying that there are terrorists in Idlib, and it is simply civilians and “pan-democrats” fighting for their human rights, by way of “humanitarian tools” such as ATGMs, armored vehicles and automatic rifles.

The State Department, in an emailed response to questions from Al-Monitor, reiterated Pompeo’s call for a cease-fire, and condemnation of the regime of Syrian President Bashar al-Assad and its Russian and Iranian backers, and expressed solidarity with the Turkish government.

“We join the UN in calling for an immediate cease-fire and for indiscriminate violence against the people of northwest Syria by the Assad regime, Russian, and Iranian forces to stop,” a State Department spokesperson said in an email.

“The Syrian people are bearing the burden of Assad’s push for victory and paying a terrible and deadly price,” the spokesman continued, noting that more than 80% of the almost million people who have fled to date are women and children. “Babies and small children are dying from the cold. More people are dying from attacks on settlements for the displaced.”

“While the Assad regime and Russia continue to indiscriminately attack and kill civilians, the US government is providing humanitarian assistance to those in need in northwest Syria,” the State Department spokesperson continued. “Despite ongoing safety and security challenges for humanitarian agencies in northwest Syria, State and USAID partners continue to provide emergency assistance to vulnerable populations. US government partners are distributing essential relief items, food, and winterization support to internally displaced persons (IDPs); supporting hospitals and mobile clinics serving conflict-affected populations; and providing shelter and water, sanitation, and hygiene (WASH) assistance to IDPs in camps and informal settlements across the region.”

“Turkey alone cannot handle the humanitarian fallout caused by Russia and the Assad regime’s continued attacks on the people of northwest Syria,” the State Department spokesperson said. “We stand by our NATO ally Turkey against these actions. President Trump, in his call with Turkish President Erdogan on Saturday, reiterated our call for Russia to end its support for the Assad regime’s atrocities and for a political resolution to the Syrian conflict.”

The United States has not yet announced additional pledges of support to address the staggering humanitarian crisis.

The US support for Turkey so far is expressed in diplomatic rhetoric, no action, apart from arming groups in northeastern Syria who are using the weapons to fight the Turkish troops in the region.

The UN humanitarian affairs office said it was increasing its appeal to $500 million from $336 million to try to provide assistance to over a million people from northwest Syria over the next six months.

“We initially sought to help 800,000 displaced people over the next six months; we are now planning to address the needs of 1.1 million people,” Jens Laerke, a spokesman for the UN Office for the Coordination of Humanitarian Affairs, told journalists in Geneva.

another lie from pomboy

Nothing is impossible (period)

i can’t believe sub humans like this guy exist in this world …can’t stand him, i have more respect for erdocunt than this piece of sh*t human pompeo… even tho both are first grade douchebags

Pompeo is Pumping as usual :-)

U.S. Secretary of State Mike Pompeo’s incendiary rhetoric is not always factual !!! Pompeo is a CIA nut-case TERROR-BULLY, and can’t negotiate his way out of a paper bag. Trump should fire his crazy ass.

breaking news : Erdogan promises to “liberate sieged Turkish observation points in Idlib”………..lmfao boy chill tf out before you get smacked by the saa, the guy really went full retarded …i don’t know what he is trying to accomplish with theses claims

“He also alleged that more than 3 million people were displaced in Idlib, which is 3 times as much as the typical Turkish claim of 1 million.”

Only 3 million? Why not 6 million? History shows 6 millions to be the magic number – everything is much more believable when there are 6…

Six Million sounds a fair estimate from the US, I think. :) It fit’s well with all the other bullshit that has come from the worlds largest Zio-Mafia state.

This bafoon is really a agent of antichrist. Nobody want to hear his opinion.

THE HYPOCRISY AND EVIL IS TRULY BEYOND WORDS OF NORMAL SANE MEN. WE ALL KNOW THE REAL PROBLEM IS NOW PROTECTING ISRAEL. The plain fact is, neither Russia, Iran or China or Hezbollah can allow Syria to fall. The US and West would be stirring the shit inside all these countries. The Evil Empire of the United States is falling, Trump is God’s USEFUL IDIOT.

All the wicked dogs come out of the woodwork and pretend to give a crap about civilians when their evil plans fail.

Jepp and surprise, surprise the Bornnier Swedisch/Jewish media is pushing Erdogan – therefore we might see surprises:

Al Nusra terrorists have taken one town and lost 20 others :) Lets hope they will keep up this ratio :) Also funny thing is, that when terrorists lost this town few days ago it was not enormous strategic victory for SAA according to terrorist sources :)

Sry – didnt spot that you are citing someone :)

5 Years ago before the jewish/swedish Bonnier group took over DWN, DWN was one of the few media, which named ISIS a Nato/Mossad mercenary Bilderberg controlled military unit. Now they call ISIS, the ‘Syrian National Army’, and the media DWN beongs to the same lying bunch, like all the rest of them…

Turkey is a vassal state of the US and the strings are being pulled by Washington. The US agenda is to fight Russia and Syrians to the last Turk.

It is impossible to stop laughing.

if you Dummies still dont see the Evil satanic treacherous Play by them satanic zionists, …Evil has won….and as the old saying goes

“The greatest trick the devil ever pulled was convincing the world he didn’t exist.”

PUTIN is a treacherous Zionist pig!!!!

ps. the russian Military Leadership is not at all happy with Putins Actions in regards to Turkey and Israel!!!

2 weeks later (15 days)…. BIBI flew to Moskau…met his Zionist fuck brother PUTIN…….and all smiles…all good here is the Quote from Putin at that Meetings end infront of the press ” we are happy to be good Friends with the state of Israel and are Looking Forward to work together to bring Peace to syria”

and the Quote from BIBI “thank you for the warm welcome and the friendship and partnership between isarel and Russia.We will continue to work with russia in regards to syria, but i also made perfectly clear to president Putin , that Israel will not allow iranian Forces to be stationed in syria”

Putin is a treachrous Zionist pig..

ps. just imagine..Dummies…… if Putin would have said NO to erdogan in regards to AFRIN!!! we all would not have These fuckin conversations regarding Turkey in syria, and the sooner or later, direct Involvement of NATO due to turkish Actions and defeats.That is the worst case szenarion for syria.direct NATO involvenemnt.zionist Dream. a Zionist Dream that could soon turn true due to Putins Actions.

EveryoneIsBiased
Reply to  klove and light

Some true and sadly underreported facts. And as i said before, i too see the Idlib deal as Putins biggest ever mistake in over 2 decades in forgein policy. BUT: That mistake is now being corrected. Which is what has changed, and what counts now.

Erdogan is a run over bridge nothing more nothing less.

One word out of Fat-boy’s mouth is all I need to know that he is the biggest BS Autistic child in trump gay war room. His Forsaken mother must have feed Pompeo the child drug “Ritalin” What a sack of shit-!

the disunited states of A offers bounties in the millions on the eads of people washington dc find odious and repellent and so on so why can’t a mega-rich american hating oligarch in the ME or Asia offer say a 25mb bounty on fatos’s head or 50mb bounty on dúnny the dunce’s head. fatso would be hard to miss and dunny wouldn’t be missed ever by anyone, well maybe jared and botox bitch and netanyahu would miss him a little bit.

instead these arses run around and kill and maim and destroy the lives of hundred of thousands just to keep the mic happy and the dividends coming in plentiful.

He thinks he can lie his way out of anything. He is a perennial shameless liar, a thief working for a government that specializes in stealing oil.

This is a sheer evil on Pompeo”s part

Fakespeak: According to Pompeo, the solution in Syria is a “permanent ceasefire and UN-led negotiations under UN Security Council resolution 2254”

Realspeak: The solution is to implement the Yinon plan and break Syria up into weak and easily controllable vassal statelets.

Like what happened in Eastern Ghouta, Mike, let shut the fuck up!