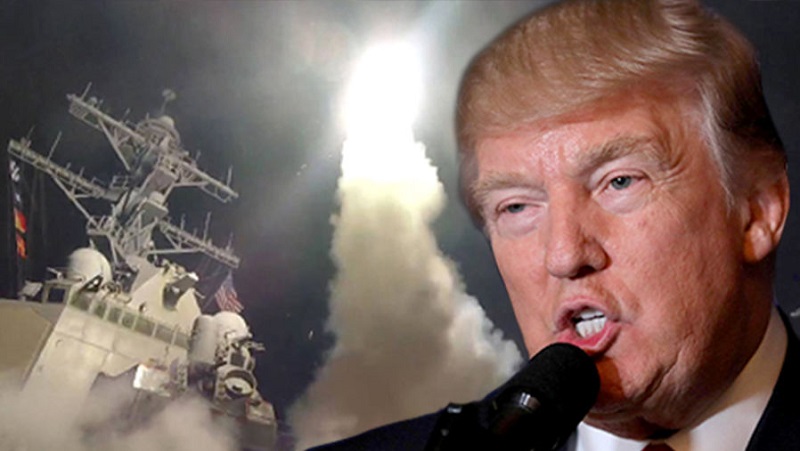 Given the complexities of both international and domestic US politics, the US cruise missile strike on the Shayrat Airbase in the Homs Province in Syria cannot be subjected to causal reductionism. It is highly unlikely the decision was made on the basis of a single set of considerations. Rather, it was the outcome of several overlapping sets of problems with which the Trump Administration is coping right now. One can clearly argue and disagree over the relative importance of these factors. However, one should not deny all of them are present in the mind of Donald Trump (because yes, he has one) and in the minds of his cabinet and advisers. So, in no particular order:

“Only Nixon could go to China”

That’s because of Nixon’s impeccable McCarthyite credentials which meant that no matter what he did, he would not be treated as an appeaser at home. Even, in effect, giving away all of South Vietnam did not hurt his standing with the conservatives. Trump has no such credentials–he is a “Russian agent”, remember? But now that, in the words of Fareed Zakaria, Trump has become president, that cloud seems to be dissipating. Furthermore, even Nixon felt that before engaging in Vietnam negotiations he needed to escalate the war, which he did with enormous human costs. One of the demands of the US hegemony is the maintenance of the fiction that, no matter what the negotiation is, the US always negotiates from the position of strength. The demonstrated US ability to strike a Syrian military target in spite of Russian objections–though with a warning of several hours which evidently was necessary to avert a Russian retaliation–gives Trump the ability to reclaim that position of strength in the eyes of the US public. This is admittedly a rather optimistic interpretation–we’ll see whether the Trump team uses it in order to actually pursue negotiations in good faith. The calm Russian reaction so far, which after all included non-interference with the US strike, suggests that maybe the Kremlin understands Trump’s predicament.

With China’s president being in the US even as the cruise missiles were raining on Syria, one can’t help thinking he was also an intended recipient of this message. Let’s not forget the US is placing ABM systems in South Korea and is threatening unilateral military action against North Korea unless China does something to make North Korea behave in accordance with US preferences.

It is also unquestionable that Trump has been very effectively “tamed” by the establishment. Nearly every one of his promises is now highly unlikely to be implemented, be it health care reform, tax reform, immigration reform, boosting manufacturing, the trillion dollar infrastructure program…and the end to the war in Syria combined with reconciliation with Russia. While that does not necessarily mean that neoconservatives, neoliberals, and globalists have entirely taken over his administration, it does mean the administration has to appease them by diluting his original objectives and perhaps even sacrificing some goals entirely in order to achieve others. On the other hand, surely Trump is aware that embracing the Hillary agenda in its entirety is a surefire way to go down in history as a universally reviled president.

Time is not your friend

The whole spectacle smells of desperation. An obviously false-flag use of chemical weapons is pinned on the Syrian government and, within 63 hours, on the basis of no evidence whatsoever save a few social media posts, off go the cruise missiles. Such a flimsy premise for military action is unheard of even by US standards–the invasion of Iraq, the destruction of Libya, even the imposition of sanctions on Russia over Ukraine were all preceded by a much longer process, with considerably greater effort given to provide at least the fig leaf of legality. Here there was nothing of the sort, which prompted Bolivia to express what no doubt many were thinking at the UN by displaying a photo of the infamous “Colin Powell and the vial of anthrax” photo during the UNSC deliberations. So why the hurry? Part of it no doubt has to do with the fact the rebels are losing. There is no plausible way, short of a direct overland NATO intervention, to turn the tide of the war. So it is up to the Western diplomacy to snatch a victory out of a jaws of hybrid war defeat. But the later the negotiations commence, the worse the starting position of West-backed groups.

The other reason for haste is the need to cut down on international commitments in order to focus on the domestic agenda which, in the US, means a major reduction in government services and expenditures. Trump Administration’s provocative actions in Syria are par for the course. They are directly comparable to the harsh rhetoric directed at Europe (the aim there also being the reduction of US security commitments) and the saber-rattling on North Korea.

Just because time is not on your side does not mean you can show weakness by appearing over-eager to offer concessions–in fact, rather the opposite. Both Trump and Tillerson are hard-nosed negotiators who know how operate under pressure. Trump, in particular, is a billionnaire largely by the dint of being an obstinate, almost unreasonable negotiator not afraid of brinksmanship. The said can be said of Tillerson’s tenure at Exxon. These two are not in the business of giving “freebies” to the competitors, and any letting down of the guard in Syria and elsewhere would be just that–a freebie. Setting up an unrealistic set of initial demands is part of Trump’s negotiating style, one that we have also seen in his rhetoric aimed at China and in the “bill” for NATO services given to Angela Merkel. Any concession down from “Assad must go” will therefore have to be paid for with Russian and Syrian concessions elsewhere. As to what the acceptable ground for compromise might be was suggested by the notes of moderation emanating from the Trump team itself following the strike. Trump’s own statement that followed the missile strikes did not call for Assad’s ouster. In other words, that’s clearly not a non-negotiable US demand at this point–had Trump said “Assad must go”, it would have all but killed any prospect of a negotiated settlement, just as it did for the Obama Administration which painted itself into a corner. Had the Tomahawk strike actually caused serious damage or killed Russian troops, there likewise would not have any possibility of forward movement in the foreseeable future. Trump so far as avoided burning his bridges, which gives cause for guarded optimism. But that does not mean that the future negotiations will be easy or bring the war in Syria to a rapid conclusion.

Another Freemason in the game. What did people expect?

His tweet about hitting runways is self-explanatory. He doesn’t know what he’s doing. BTW, has anybody else noticed nobody has suffered gas poisoning at Shayrat? It seems that should have happened if chemical ammunition was blown up…

Thats not how propaganda works. The Yankistani lying bastards will claim that because there is no CW release at Shay’rat (after CW were destroyed…), this proves that the release in Idlib could not have been due to Russian strikes.

The lies just keep reverberating in the echo chamber…

Yes, I forgot that the propaganda is aimed at an Ameroboob audience. In between ads from Big Pharma and for the latest soft-core sitcom, they’ll spin the fake news just as you said.

Time To Brush Up On Facts. Fact #1 Bannon is kicked out, Bannon was the only anti-war guy in Trumps inner circle. Fact #2 Trump blindly followers all orders giving to him by (((Jared Kushner))). Fact #3 What makes Trump so evil is his selection of the NEW ((( Inner Circle ))) People need to focus on Trumps Evil Inner Circle which I list below. They are the ones who set policy and manipulate global events. 1. Jared Kushner 2. Boris Epshteyn 3. Jason Greenblatt 4. David Friedman 5. Stephen Miller 6. Steven Mnuchin 7. Lewis Eisenberg 8. Michael Glassner 9. Ivanka Trump

Trump is the swamp, always was. He fooled a lot of people especially the Yanks who are easily fooled. Russia did state that they will wait and see before passing judgement, looks like Russia was right.

A nicely surmised piece. Thank you.

So, to sum it all up: to AVOID responding to the attack with chemical weapons, which probably did NOT happen, the Americans decided NOT to attack the Syrian government, that probably was NOT responsible, by launching 57 missiles, most of which did NOT reach the target, and those that did made NO significant damage the base that was up and running already the next morning. The same morning these same Americans bombarded Khan Skeykun, the place where the chemical attack probably NEVER happened and according to the information from local “activists” reportedly killed and wounded innocent civilians. Talk about surrealism …

Just before sitting down for dinner with Xi , Trump ordered the strike , talked normally during dinner , and informed Xi as the missiles were hitting . Xi left 11 minutes later . The whole show aimed at intimidating China .

Xi wouldn’t be intimidated by this pathetic firework show. Take a look at his and his wife’s faces when they were smiling for the cameras. Plastic, set faces that barely could hide total disgust. Even Trumps wife was leaning away from him. She hates him.

Thinking he’ll be offed by Poppy Bush if he didn’t find an excuse to escalate.