Today, the mainstream media is full of the reports about the Russial ruble’s falling. Let’s check what they hide. 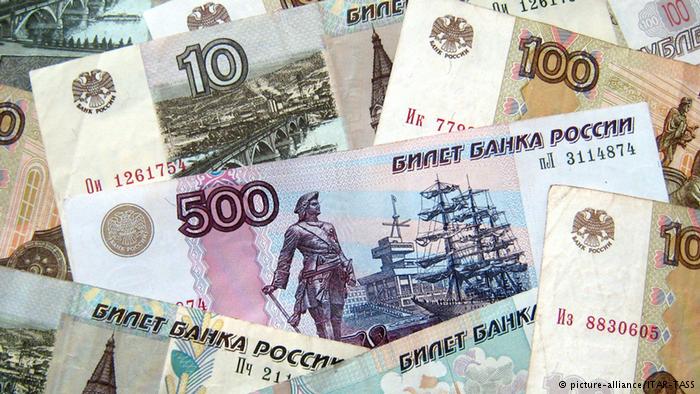 Written by HB exclusively for SouthFront

On the 16th of December 2014, Bloomberg.com published an article under the title „Here´s why the Russian Ruble is collapsing“. The article describes a panic in the Russian society and how the Russian population was reportedly „rushing malls to swap cash for washing machines, TVs, or laptops—or anything that seemed as if it might hold value better than paper money“. The article then goes on to explain that there are two big things hurting the Russian economy, the falling price of oil and economic sanctions imposed by the west as a punishment for Putin’s actions in Ukraine.

At that time the exchange rate between the dollar and the ruble was $ 0.014/Ruble. Today just over one year later the exchange rate is $ 0.0144/Ruble which indicates a 2.8% appreciation of the Ruble to the dollar in one year.
Although it has undeniably been a bumpy ride for the ruble this year, a 2.8% appreciation can hardly be considered a collapse. In fact the ruble appreciated 39% to the dollar in only 9 days after the Bloomberg article was published. Then it started falling again reaching a low of $0.0144/ruble by February 1, 2015. The ruble then rose in value and reached it peak of 0.0205 in May 2015. It has now fallen back to its February low of $ 0.0144/ruble. But is still 2.8% above what it was in December one year ago.

Gold is an interesting commodity to consider when examining currency trends, especially in a currency crisis since it´s a commodity investors historically run to when they lose faith in paper-money. Gold has fallen 14.4% versus the dollar since December 9, 2014. So the ruble has done even better than gold in the past year.

One should not therefore run to conclusions too quickly about the future or past value of the Russian ruble. It is undoubtedly a currency linked to commodity prices, mainly that of oil. Oil is currently trading at its lowest since 2009. Crude oil was trading above $ 100/barrel in 2010 2011, 2012 and until late 2013 when it started falling. It is currently being traded below $ 40 per barrel.

On December 8, 2015, a Bloomberg article argued that the ruble was trading to high and that the currency is aproximately 7.5% overpriced  as compared to oil prices. The article points out that the Russian ruble has failed to keep up with the drop in the price of crude oil and calls for the  Central Bank of Russia to lower its intrest-rates in an effort to lower the exchange rate of the Russian ruble. Whether or not this will be done remains to be seen. The high exchange rate of the ruble can make it harder for the Russian government, just as any other government depending on the export of oil, to cover its deficits in the short run, since oil is mainly denominated in dollars. So a slightly lower exchange rate of the ruble, somewhere close to 7.5 % lower, is not unlikely in the short run. However the Russian government may also decide to ride it out and wait for the price of crude to rise again, since a 7.5% rise in the price of crude oil would have the same effect for the financing of their deficits as lowering the exchange rate of their currency would.

One factor in the future development of the price of oil is the ongoing Syrian conflict and the development of the ISIS oil trade. Another factor would be the increased export of oil from Iran when the sanctions are lifted on Iran following the recent nuculear deal with the U.S. and its allies. It will also be interesting to see if that export too will be denominated in dollars. The OPEC countries however denominate their oil in dollars and on Friday they decided not to cut production to push up their prices despite prices being currently at a 6 year low. That decision was highly controversial, some market strategist calling it the „stupidest possible move“ while others a proof of it as a means of keeping American shale off the market. The fact remains that the low price of oil is not only hurting Russian exports but others too. American shale oil and North Sea oil will have a hard time combating these market conditions without lowering their exchange rates drastically as Norway has done. And even though hurt by low oil prices rather then sanctions, the Russian currency has done fairly well in the last year and is likely to rise further in the long run if commodity prices rise. Bloomberg points out that “there are several striking parallels between the OPEC situation now and that of 1997 to 1999, when the group lost control of the market and oil slipped to less than $10 a barrel“. Bloomberg further points out that back then the oil price spiked almost 15 fold shortly thereafter, reaching as high as $150 a barrel. In this light the ruble may not at all fall in value in the long run, but rather appreciate a great deal all depending on the development of the price of oil.