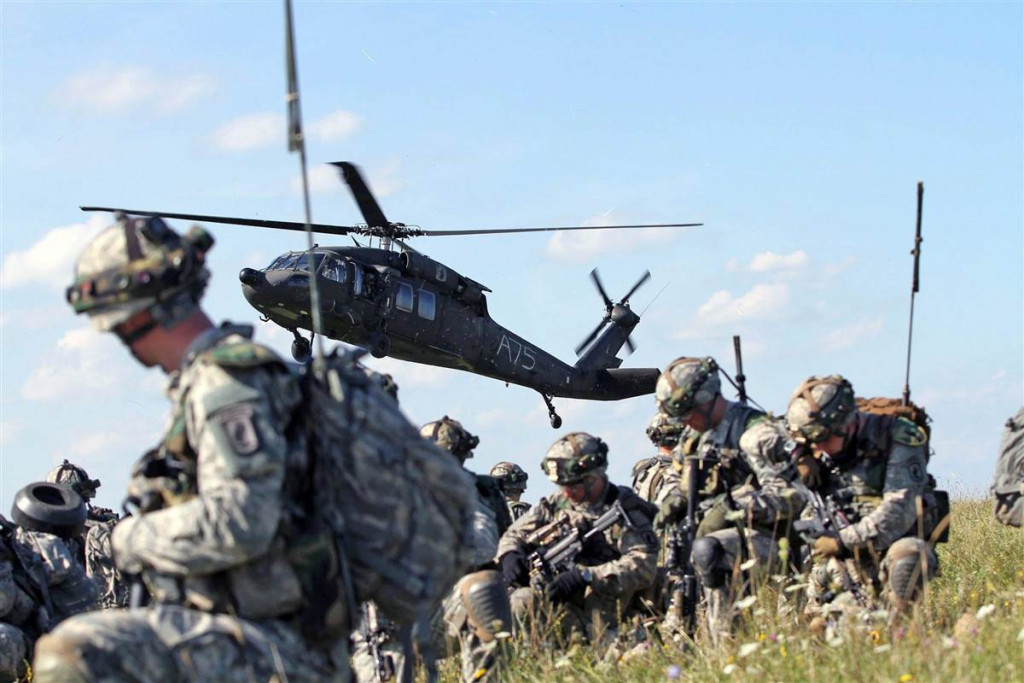 War for Peace. Is for thousands of years known slogan not rarely used today to justify many wars. In the past we could hear it in ancient Rome, Napoleon’s France and even recently in the region of a war-torn former Yugoslavia, but today this propaganda is often seen in association with NATO. Does NATO really keep their wars to secure peace or is it because of the interests of capital and profits which with every bloody march are more and more accumulating on the other side of the pond? It is known that one of the foundations of the American economy is a defense industry sector, and it is quite obvious that it would not make any sense if wars or other kinds of conflicts would not exist.

For those who have not paid attention in the history class, NATO was created shortly after the Second World War in 1949 where 10 European countries (France, Portugal, Denmark, Iceland, Italy, United Kingdom, Norway and the Benelux countries), Canada and the United States Of America in Washington signed North-Atlantic agreement. After the race for Berlin, where the Soviets and Americans got their part of the cake, of course I do not mean directly for the territory that is the sphere of influence, but the Nazi weapons and technology, which was then by far the best that the world has seen.

Immediately afterwards there was a bloc division or distant race in progress and arms. Six years later in response to the accession of the Western Germany, NATO Pact gets a creation of a new military alliance in the Eastern Bloc called the Warsaw Pact, which was composed of Member States of the Union of the Soviet Socialist Republics, Hungary, Romania, Bulgaria, Albania, Poland, Czechoslovakia and Eastern Germany . After few decades it came to one of the most famous events which well shook the Europe back then. In fact it is about the fall of the Berlin Wall. Shortly after that, there is a unification of the two Germanys and as soon as this happened the first member left the Warsaw Pact. And others followed the year after. So the question is now, after the collapse of the Soviet Union and the Warsaw Pact as a military alliance, what is now the purpose of NATO’s existence? Why does it still continue to spread to the East, decades after? Why is NATO pressuring the member states to spend more than two percent of their GDP on defense? Defense against whom? The imaginary enemies that mainstream media has served through its propaganda. The two per cent of GDP of each member is spend by the US military industry and their corporations. I think it is clear to everyone that the United States has a leading role in the NATO alliance, and it determines the standards of weapons and defense in quotes.

We should not be surprised then by the fact that the NATO member countries are one of the wheels of the US economy. Just imagine when you add up the two percent of GDP of today’s 28 members. We come to a huge amount of money which is collected on the other side of the pond. Of course sometimes these weapons must be used and tested in actions such as Desert Storm, the intervention in Afghanistan, Kosovo, Libya, Iraq, and many others. Every expert in the geopolitical scene knows that all these NATO’s interventions are used only to bring the profit to the American military industry and using their slogans about freedom and democracy as a cover for dumbing down the masses to justify their evil deeds. Of course NATO has not only its fingers involved in the killing of innocent children, women and civilians, but it is also a big narco-distributor.

For example, take Afghanistan in which since 2002, from when American troops there trodden opium production it increased by 3 times and now accounts for 90 percent of world production. The UN says that only in 2014, opium production there increased by seven percent. The US military admitted that it protects the fields of opium poppy and the American portal Public Intelligence published a series of photographs which they donated to the public and are not copyrighted, so that they could easily continue to spread. As it is known the US government with the help of NATO in various parts of the world carries out operations for the manufacture of drugs. Yet another example is the Colombian cocaine which is in its purest form sent to Wall Street, to bankers and brokers so they could work better. How long will the world live in ignorance or live and do nothing against the NATO criminals, only time will tell.

We in Croatia have for example our President Kolinda Grabar Kitarovic, who is clearly lobbying in the Balkans for NATO among non-member countries to join, promising a security against some imaginary enemies and similar, or by mentioning that phrase We are the West and we know who is the rest. I do not know who would want to be a part of civilized West these days. West, which has their foundation of their culture and civilization well soaked with the blood of blameless and the innocent. Who actually wants to be a part of the hypocritical West that daily criticizes and hopes that the fall of the secular Syrian President Bashar al-Assad and every day trades oil with Saudi Arabia in which Sharia law is in force? The Islamic State has taken over the educational system of Saudi Arabia but we’ll never hear or read in the media that Saudis need a democracy as long as there is oil at a cheap price and it contends the West, regardless of human rights violation . And I’ll finish with this thought for the end – The West must fall soon.

The West will do everything they can to destabilize as many countries with the goals of finally destabilizing China and Russia. They do not want to coexist with anyone in equal and respecting power. Even Europe is being destabilized by the U.S. with the refugees. The European elites either unknowingly or more likely know this (the elites will be protected behind walls or can always fly to an island i.e. New Zealand) and the culture of Europe will change in a short time simply because the most Muslims will out breed the Christians and will not assimilate.

“the most Muslims will out breed the Christians and will not assimilate” -And unfortunately, the vast majority will not leave peacefully either which is why there is inevitably bound to be a massive war/slaughter of Muslims, Arabs and Africans in Europe. I’m in the US, but if called upon, I would travel to Europe to take part in the operations to cleanse Europe of the NATO migrant invasion.

Don’t eat the meat, it might be dead Christian kebab. I wish I were just kidding.

Gee, i wonder who is responsible for the decadent west? Hmm… I wonder… http://realjewnews.com/

The West: Arnon Milchan’s Israeli espionage center at Creative Artists Agency and Slate Public Relations based in Los Angeles, which is probably where this article was written. I can think of a few solutions to this problem of ‘The West’, like considering these two businesses the ‘head’ of the entire ISIS operation, their propaganda and assassination central.