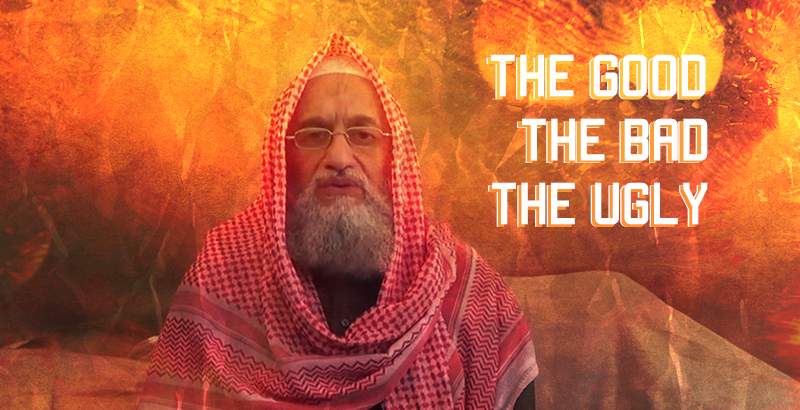 The actual head of the central branch of Al-Qaeda, Egyptian cleric Ayman al-Zawahiri (for it is he rather than bin Laden, who maintained operational control of the organization throughout its existence) has called on all the Muslims to unite to oppose the Russian and Western “threat” in Syria. The summons was issued, typically for al-Zawahiri, on a videotape issued by his associates, and while the tape is not dated, it is most likely of very recent vintage. Al-Zawahiri argues that since the Americans, Russians, Iranians, Alawites, and the Hezbollah are all coordinating their actions against the “moderate rebels” in Syria (which is something of an overstatement–the US seems to view some of the “moderate rebel” groupings as useful tools with which to implement its policy of regime change in Syria, much as it used al-Zawahiri’s ilk in Afghanistan in the 1980s), then all the rebel groups ought stop their internecine struggles and unite forces against the outsiders.

Even though al-Zawahiri is ethnically Egyptian, al-Qaeda itself has close ties to Saudi Arabia (financial and otherwise), so much so that one can draw a few conclusions from that statement concerning Riyadh’s current strategy and priorities in Syria. For starters, Saudi leadership appears to be genuinely worried about the Vienna negotiations which might well establish a Minsk Agreement-style framework toward establishing some sort of mutually acceptable post-conflict Syria. The Vienna meeting did result in an agreement to come up with a list of “bad terrorists” in Syria who presumably would never be invited to participate in the political process and could be bombed by everyone who’s not lazy. That list will almost certainly include the al-Nusra which is on every terror watch list in the world.

This, naturally, does not sit well with Saudi Arabia which views itself as the regional hegemonic power which pays fealty to the US (and places billion-dollar defense contracts with US defense contractors, which is a considerable service in that it keeps important production lines open and keeps tens of thousands of highly skilled workers employed) but at the same time clearly expects to be deferred to on most matters of regional politics. The fact that Saudi-sponsored al-Nusra regularly captures, disarms, or even kills US-trained militants very much points to a certain divergence between Riyadh and Washington.

To make things worse from Saudi perspective, the US seems determined to continue wooing Tehran, as shown by the multi-party talks leading to an agreement concerning the Iranian nuclear program and the ultimate lifting of sanctions–again, something that Saudi Arabia does not want to see because it will increase Iran’s political weight in the region. The recent consultations and visits by various Saudi princes to both Washington and Moscow do not appear to have assuaged their concerns, raising the possibility that US and Russia, public rhetoric notwithstanding, are actually coordinating their actions in Syria to a considerable degree.

Therefore, what is Saudi Arabia to do? One likely outcome is the stepping up of training and equipping of new batches of “moderate rebels” with the goal of inserting them into Syria to continue the fight. While this would be an expensive undertaking, the alternative is to admit defeat and be forced to abandon the positions in Syria that have been won at considerable expense. To make things worse for Riyadh, since al-Nusra is the core of the Jaysh al-Fath opposition coalition which includes both secular and religious militant formations, the blacklisting of al-Nusra would mean the fragmentation of al-Fath unless a plausible alternative to al-Nusra is found (it’s not clear whether “rebranding” the organization would work–earlier attempts to do so have failed). Saudi Arabia does control the National Coalition of Opposition and Revolutionary Forces in Syria which, however, is not a major force to be reckoned with on the ground as its “talking heads” do not seem to have the respect of al-Nusra head-choppers. And in the absence of al-Nusra, Saudi operational control of such formations as Ahrar ash-Sham cannot be taken for granted, especially since they also receive aid from Jordan and the United States.

Therefore al-Zawahiri’s call to unification appears to be aimed not so much at the Islamic State (which answers mainly to Doha rather than Riyadh in any event) but at the al-Fath coalition whose unity is beginning to unravel. The fact that Syria, aided by Russia, is preparing to launch an offensive against Idlib which is held by al-Fath cannot make the situation any easier. Which means Saudi Arabia is in the process of losing two wars all at once–one in Syria and one in Yemen, the latter of which is actually beginning to soak forces away from the Syria front to the point of Syrian militants being airlifted into Yemen in order to participate in the assault on Sana’a.

It is also of interest that al-Zawahiri has called on al-Fath to enter into an alliance with the Islamic State. That such a move is being considered can only mean a certain sense that time is not on the militants’ side following the Russian intervention. To a certain extent, such an alliance already exists in principle since before the militants’ Idlib offensive when Riyadh, Doha, and Ankara agreed to delineate their favorite terrorists spheres of influence in Syria prior to the offensive and to enter into a mutual ceasefire (which of course is an arrangement short of an actual alliance). However, the contraditions between Ankara, Doha, and Riyadh seem to be so great that an actual cohesive alliance between the three sets of militants seems rather unlikely to materialize. It would have appeared on the scene already if such a possibility was actually in the cards.
But if al-Zawahiri’s call is not heeded, what happens next? It is entirely possible that if the Vienna process continues to make progress and the Kurdish offensive against Raqqa actually takes place, Saudi Arabia will find itself forced to make a humiliating retreat from Syria in order to focus its attentions on Yemen. Russian intervention in Syria had all but made the Saudi “maximum endgame” impossible. While Saudi leadership seems to have weighed qualitative updates to the rebel arsenal (especially by providing portable SAMs for defense against Russian airstrikes), they do not appeared to have followed through, likely due to the fear of international reaction (the US, which fears for the safety of its own aircraft, would likely not sanction a move like that).