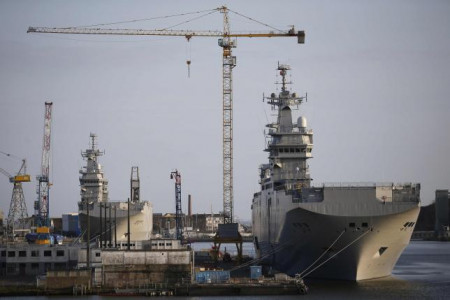 New admissions by Frances Senate International Affairs Committee in a transcript released on Tuesday reveal that Frances reasons for pulling out of a $1.3bn deal with Russia for two Mistral warships was because of external pressure from East-European countries including some Baltic states.

“It initially shows the state of Franco-Russian relations. This is in my opinion a big mistake not to consider Russia as a necessary interlocutor, whatever his attitude to Ukraine, for the resolution of difficult diplomatic situations and crises in Syria and elsewhere. For once, the subject is no consensus – a rarity in the area of ​​foreign policy. Relations with Russia have always been regarded as an essential component of our diplomacy” admitted Mr. Cambon one of the 10 Vice presidents of the committee.

The Chairman of the committee and former Prime Minister Mr. Jean-Pierre Raffarin is quoted as saying,

“When delivering the boats, we experienced significant pressure from Eastern European countries, let alone the Baltic countries, in the framework of the NATO parliamentary assembly. After the annexation of the Crimea, it was no longer possible to treat this transaction as a purely commercial angle.”

“Poland had indeed threatened to break off negotiations, which covered fifty Caracal helicopters for $ 2.5 billion, if we delivered boats.”

France reached a later agreement to pay compensation to Russia for breaking the deal off. The two Mistral warships were then sold on to Egypt after  French President Francois Hollande and his Egyptian counterpart Abdel Fattah el-Sisi conversed over telephone reaching terms for the sale of the two Mistral warships.