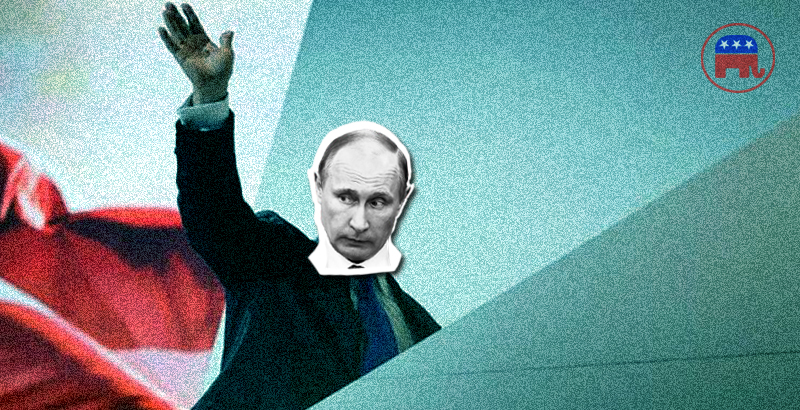 The American politico-technological wisdom, proven through decades, proclaims: “Do not rock the boat”. If you aspire for a position as governor, congressman or, more so, president, you must by all means avoid statements, sharply contradicting popular opinion.

You can disagree with your opponents; you can criticize their policies. You can even promulgate bold new initiatives, but to contradict the socio-media consensus – that’s a no-no!

And if you let something slip in your speeches, then you must quickly explain to the public that you “meant entirely something else”.

Of course, this does not apply to all the aspects of internal and foreign policies. However there are such “truths” that have been repeated so often by the press and politicians of both parties in the USA, that they are considered self-evident and cannot be subject to any kind of revision.

One of these “truths” happens to be Russian hostility and the innate craftiness of her leader, Vladimir Putin. Whatever Putin does, it is bad. Whatever initiative on the international arena that Russia proposes, it is dangerous.

One cannot say that all American experts, analysts and journalists agree with this. There are reputable journals that publish articles from authors that question the presence of the Russian threat and ridicule the presentation of Russia as the centre of universal evil.

But then these are experts and analysts. Politicians until recently were expected to argue only the degree of danger, emanating from the Kremlin, and about Moscow’s countermeasure methods. Talks about cooperation with Russia were allowed “on a number of issues”, but about friendship and understanding, never. At least, not until we fulfill all of Washington’s demands.

What in fact was Obama’s “reboot”? It was a proposal to forget about the previous relationship between the two countries and start from a clean slate. The new beginning did not suggest that Russia would be treated as an equal partner. Moscow simply must forget everything what Bush told her and begin to listen to Barak Obama’s instructions.

In any case, the exiting president of the USA truly is more peace loving than his predecessor. He truly wanted to solve the majority of questions through diplomacy. But this does not mean at all that national and geopolitical interests of Russia were taken into consideration. Obama simply preferred soft power as opposed to tough power.

In 2012 the Republican candidate to the presidency Mitt Romney called our nation “the main geopolitical enemy”. The objections from the White House boiled down to prioritization. Russia does not threaten the USA as international terrorist does, that was Romney’s main argument in the debate. Since then in the list of threats of the United States, Obama always puts forward “Moscow’s aggression” somewhere between another deadly virus and ISIL. That is, regardless of “reboot”, reduction of strategic nuclear capabilities and “the discussion of issues of mutual interest”, Russia and Putin stayed as opponents, if not as enemies for the America administration.

The Republican hawks in 2012 accused the president of showing weakness and not enough firm opposition to the Kremlin. And that was before the historical events of 2014! However no one tried to make Obama a friend of Putin. There were too many serious accusations…

In the current political season this accusation was launched against Donald Trump.

It must be said, that the candidate “framed” himself. He respectfully spoke a few times about the Russian leader and stated the need to establish relations with Moscow. For this he was called a “Kremlin candidate”. And when Wikileaks activists posted with free access the internal correspondence of the Democratic Party’s leadership, which were quickly attributed to “Russian government hackers”, who acted in the interest of Trump.

Hillary Clinton’s headquarters and the already obviously working for them mainstream media press tried to present the matter in such a way that the ex-Secretary of State fights on these elections with “Putin’s representative”.

Any other politician in Trump’s place would have tried to show that he regards the Russian president as bad, that Russia will receive a kick in the balls from him and he in every way sympathises with the “young Ukrainian democracy”.

But Trump is Trump. Contrary to the generally accepted logic he raised the stakes and again very definitely expressed himself in a pro-Russian way.

In an interview on ABC News, The Donald, having admitted about his lack of any business interests in Russia, once again praised Putin’s leadership qualities and – what horror! – admitted the possibility of recognizing Crimea as Russian territory. The situation on the Ukraine he characterized laconically as: “Complete chaos”.

Trump once again spoke out for establishing relations with Russia and cooperating with our country in the business of destroying ISIL.

Judging from everything, it was not improvisation. In the interview on CNN one of the associates close to the Republican candidate, senator Jeff Sessions (it is rumoured that he may become the Secretary of State in the Trump Administration) declared that “another cycle of hostility between the USA and the Russian Federation” must quickly be stopped. The journalist with a bewildered look asked the senator an absolutely childish question: “In your opinion, is Putin good or bad?” Sessions calmly answered [link; translator’s note: the answer and question start at 4:48]: “We have a lot of bad leaders around the world that operate in ways we would never tolerate in the United States but the questions is, can we have a more peaceful, effective relationship with Russia. Utilizing our interests that are similar in a realistic way to make this world a safer place and get off this dangerous hostility with Russia.”

As we can see, the Trump campaign did not try to distance itself from the picture drawn by the MSM. The picture of “Putin’s friends”. On the contrary, The Donald and his associates decided to stand their ground and ultimately sharpened the game.

It is possible that this is another trap for Hillary, similar to the one that was masterfully organized with the history of her electronic correspondence. The fact of the matter is that the ex-Secretary of State erased from the mail server almost thirty thousand mails that, according to her words, had an exclusively private character and not subject to the transfer to the State Department. After the hacking of the Democratic National Committee server and accusations on Russia Trump jokingly turned to the Russian hackers with a request to find the erased mails and to transfer them to the FBI and the press.

The Democrats descended on The Donald criticizing him that he is calling upon another country to expose national security of the USA with a cyber attack. The MSM reasonably acknowledged that if the talk is about national security then the erased mails were not of a private nature, and it means that they were removed unlawfully.

It is likely that Trump once again conceived a clever move. In the end, it is namely Hillary, in her time, that brought to Moscow the “reset” button”. So her attacks on Donald over “friendship with Putin” can be seen as a sign of inconsistency. Clinton, as well, will inevitably have to explain, why be friends with Russia and Putin is forbidden. She will be forced to criticize Russian foreign policy with stronger words and promise to “punish the aggressor”. These promises almost certainly in the debates and in Trump’s political ads will be presented as inciting wars and a diversion in the fight against ISIL.

But I think that everything is much simpler. The “sacred truths” of American policies, Russia is bad in their view, have not been tested by public opinion. These are merely politicians and “talking heads” all one hundred percent are sure that the politician caught in good relations with Putin inevitably will loose a significant portion of his authority and rating.

Even political correctness also at one point seemed a necessary quality of a politician who had any aspirations to the White House. Trump from the beginning of his election campaign was pointedly not politically correct and so far this has only helped him.

And what The Donald was not accused of!

Well, “Putin’s friend”, it seems that is one of the last spells in Hillary’s arsenal. And if it does not stop Trump, it is unlikely that anything will.

The point is that we in the west dont want to die for some insane geopolitical aims of deranged (((neocons))).It does´t have to do with love for Russia or whatever, there is simply nothing at stake for white working class,middle class people in the West but a lot to loose.

But you americans will go to war , because that’s what you do best; In your 240 yrs of history your nation has been at war for 223 out of 240. That’s a ratio of 93%. The longest that you have been at peace is 5 yrs!(1935-1940). The Spartans of Ancient Greece have nothing on you; America has wars on drugs , wars on poverty, war on crime, everything in your society is aviserial. As I said you will go to war, a narrative will be pushed onto your TV screens, to whip you up into a frenzy; Here are a few false flags that i recall over the years, USS Maine Spanish–American War, 15 February 1898 RMS Lusitania ‎7 May 1915 ww1 U.S. aggravated and enticed the Japanese to attack Pearl Harbour. ww2 (Read up on Dušan Popov Serbian double agent for mi6) Gulf of Tonkin Incident, led to U.S. ground troops in vietnam, August 2, 1964 Nayirah al-Ṣabaḥ October 10, 1990 iraqis killing babies; Iraq war ver 1.0 Colin Powell U.N WMD speech Iraq war ver 2.0 The best scenario, the rest of the world can hope for is that your economy implodes; It’s the only time you’re only killing your own country men instead of the world at large.