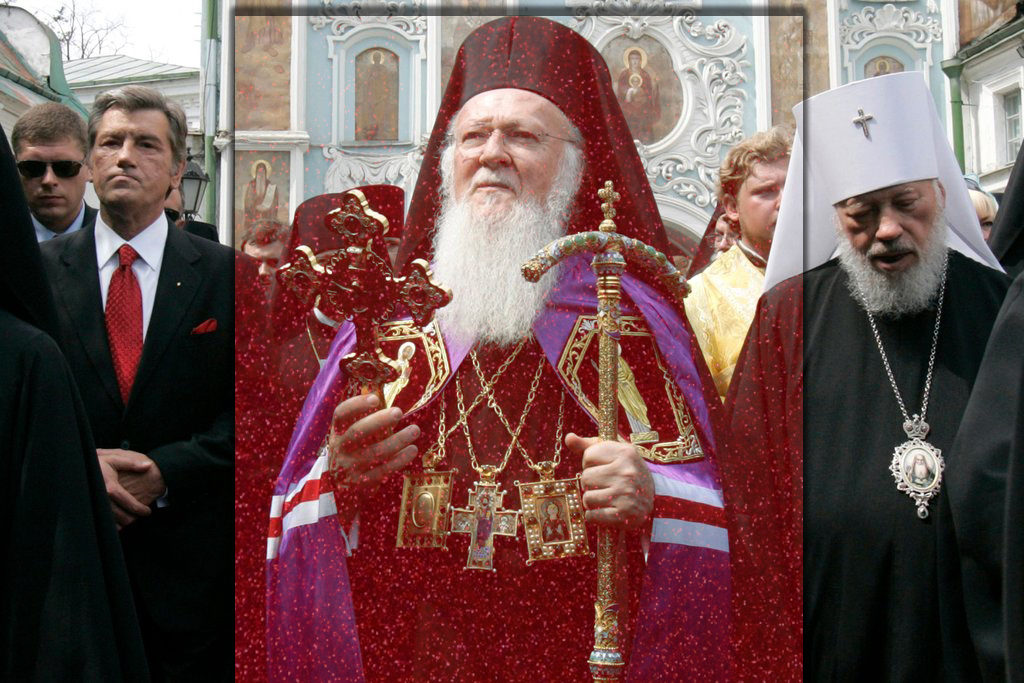 Why? Because they refuse to follow or honor the schism of the “Orthodox Church of Ukraine” (OCU), created largely by Bartholomew himself, in conjunction with former Ukrainian President Petro Poroshenko.

To achieve recognition of his “creation” and then be able to increase his influence further, Bartholomew has taken part in quite a few political and religious games.

For a month and a half, Patriarch Bartholomew was silent. On June 30, he condemned in advance the decision of the Turkish authorities to turn Hagia Sophia into a mosque, after which he went into a sort of hiding. They say he waited until all the noise died down.

In the end the Sumela monastery was reopened and it became obvious why Bartholomew kept silent, he even thanked Turkish President Recep Tayyip Erdogan of taking such good care of Christianity.

And then, Bartholomew finally, publicly, designated the enemies of the Patriarchate of Constantinople, and it turns out that they are “within the Church-mother.”

“In fact, there are many of them, <…> they are also subjects of the Ecumenical Patriarchate, its spiritual descendants,” he said.

This also refers to the Russian “ungrateful children” who also refuse to acknowledge his primacy over the Orthodox church.

“We continue to embrace everyone, enemies and friends, with our love, our prayer and our sensitivity,” Bartholomew said.

But, according to Orthodox canons, the only possible head of the Church is Christ, and not a single patriarch. All metropolitans, archbishops and bishops are only primates of the flock. They resolve issues among themselves on the basis of consensus, that is, universal agreement.

However, two years ago, the unity of the Orthodox world was violated precisely because of the ambitions of the Patriarch of Constantinople: he went to meet the politicians from Ukraine and agreed to legalize local schismatics.

At the same time, the believers of the canonical Ukrainian Orthodox Church (UOC) did not ask for full independence.

The UOC is only nominally part of the Russian Orthodox Church – according to the charter, it is considered “self-governing” within the Moscow Patriarchate, and with unique “rights of broad autonomy.”

As a result of the interference of the Phanar (the district of Istanbul, where the administrative center of the Patriarchate of Constantinople is located) in church affairs in Ukraine, the Russian Church broke off communication with Bartholomew and Co.

The Patriarch of Constantinople, bypassing the age-old canons, encroached into its territory. Instead of discussing the problem of the Ukrainian schism, which has lasted for 30 years, Bartholomew issued a tomos of autocephaly to the “Orthodox Church of Ukraine”.

After issuing the OCU Tomos on January 6th, 2019, the Phanar began a large-scale game behind the curtains.

Patriarch Bartholomew promised that “soon” all 14 local churches of the world will recognize the schismatics.

That did not happen. For nine months, the idea was either openly condemned – like, for example, the Russian and Polish churches – or they completely ignored the topic. Among the “abstaining” are representatives of the “Greek family” bound by the same language, ethnicity and liturgical rite.

In addition to Constantinople, these are the Alexandrian, Jerusalem, Cypriot and Hellas (Greek itself) churches. The latter is closest to the Phanar – priests for the Patriarchate of Constantinople, based on the territory of Muslim Turkey, are trained in Athens. In addition, the Church of Greece is financially dependent on the state – Greece sponsors a salary fund for the clergy.

In October last year, the Phanar managed to influence the Church of Greece, and she recognized the Ukrainian self-consecrated persons.

True, not unanimously – several bishops spoke out against. The principle of conciliarity (consensus), which is most important for Orthodoxy, was violated.

The Phanar lured the Primate of the Church of Greece by deceiving him – Archbishop Jerome of Athens was invited to Istanbul to serve with Bartholomew.

Jerome spent Vespers with the Patriarch and planned to stay the next day for the Liturgy.

However, during the ceremony, it turned out that representatives of Ukrainian schismatics were also praying in the church.

Upon learning of this, the archbishop did not appear at matins.

However, the propagandists of the OCU presented this as their victory.

Indeed, according to the canons, if one clergyman takes communion from the same cup as another, it means that he considers him “a brother in Christ.”

And if someone serves along with the schismatics, he actually joins them.

A month after the incident, on November 8, 2019, the Orthodox Church of Alexandria recognized the schismatic OCU (centered in Egyptian Alexandria – it historically nourishes the African continent in the Orthodox world, and its hierarchy is formed mainly from the Greeks). The media then wrote that the decision was made under pressure from Greek diplomats.

And now the “Istanbul patriarchy” is preparing to pull off the same trick.

This time, according to Ukrainian media, Bartholomew chose the Jerusalem Orthodox Church as the number one target. It, like the Cypriot one, a year ago did not follow the lead of their Greek counterparts.

Moreover, Patriarch Theophilus initiated a pan-Orthodox discussion of the Ukrainian schism. The first attempt was made on February 26, 2019 in Amman. The meeting was attended by the heads and representatives of six local churches, although everyone was invited – including Bartholomew.

And now Patriarch Theophilos of Jerusalem has been invited to Istanbul for a service on the occasion of the Church’s New Year on September 1.

The heads and representatives of all “Greek” churches will come to the celebration. Obviously, members of the OCU will also be present.

“This method is the cheapest for the Phanar: they also suffered financially from the pandemic. Otherwise they will lure Theophilus – and then they will trumpet that he served with the schismatics. He will have to explain his action. As we can see from the example of the Church of Greece, attempts to justify later turned into the recognition of the OCU by Patriarch Jerome,” a Ukrainian source claimed.

In turn, a person close to the leadership of the Jerusalem Church, in a conversation with RIA, emphasized:

Patriarch Theophilus is now “in a difficult situation like never before.” He is being pressured not only by representatives of the Phanar, but also by influential members of the Greek diaspora. Some of them are big donors.

“Despite this, it is unlikely that Theophilus will go to Istanbul. Now in the Greek world, it is he who is gaining strength, not Bartholomew. I do not think that he will play into the hands of an opponent,” the source noted.

The position of the Jerusalem Patriarchate is unenviable. After all, the recognition of Ukrainian schismatics will inevitably lead to a break, primarily with the Russian Orthodox Church, the largest in terms of the number of churches, clergy and believers.

This is fraught not only with formal, at first glance, “sanctions”, such as disobedience of the primate in the service, but also with tangible consequences for the image and economy.

So, after the recognition of the schismatics by the Church of Greece, the Russian Orthodox Church “did not bless” pilgrimage trips to the holy sites of Greece and communion in its churches. This also affected the monasteries of Athos.

This includes, also the jurisdiction of the Jerusalem Patriarchate – the main ancient shrines of Christianity, including the Church of the Holy Sepulcher. Every year tens of thousands of believers of the Russian Church go to bow to them – only the coronavirus pandemic and the closure of borders have suspended an endless stream of pilgrims.

It is possible that Patriarch Theophilus manages to escape Bartholomew’s trick, since there are minutes of the meetings and it is clear in advance who will be present to serve.

At the same time, Constantinople has many ways to force Jerusalem to “unofficially recognize” the Ukrainian schismatics.

There could be discussions, various negotiations and more. But most significantly, there will be great pressure from the Greek diaspora, as well as from the United States.

The Americans have recently been communicating more with the Jerusalem Church than before, trying to influence its actions. But for now, the clergy are holding on with dignity – they do not allow themselves to be drawn into a large-scale church-political adventure started two years ago.

Stay strong Russia, Moscow is the Constantinople of the modern age.

lol…as far as ı remember from ottoman archives these sisters were playing influence,power games at 18th century too…When russian empire made its first contact to orthodox araps at levant region through us,they had issues with the orthodox church of greeks at Hatay aka Sanjak of Alexandretta.

You forget the fool Patriarch Bartholomew presided over the total vandalism of Sumella within weeks of Erdogan reopening it. Foolish agent of the ZioYankees! He even supposedly tried to help unseat Erdogan in the2016 coup ,to reap no fruit whahtsoever. In fact ,the zioyankees bent him over a barrel for the writing of the Tomos! God forbid taht this hack be tge xhampion ofthe Greeks andOrthodox people. If it was up to me i’d defrock the pimp and kick his backside into the street and i love both the Greeks and the Orthodox.