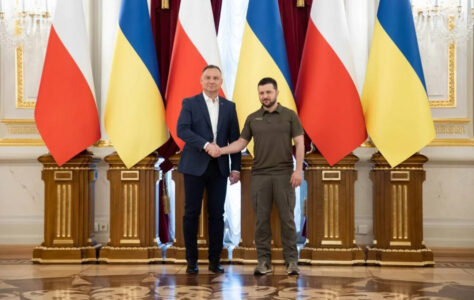 Wars tend to bury facts.  What comes out of them is often a furiously untidy mix of accounts that, when considered later, constitute wisps of fantasy and presumption.  Rarely accepted in the heat of battle is the concept of mistake: that a weapon was wrongly discharged or errantly hit an unintended target; a deployment that went awry; or that the general was drunk when an order was given.  Wars invite ludicrous tall tales and lies with sprinting legs.

In the Ukraine War, where accurate information has almost ceased to be relevant (unless you believe the sludge from any one side), the latest shock and shudder came in the form of a missile that fell on Polish territory.  As a result, two farmers lost their lives in the village of Przewodów.

The farmers, as the pencilled in victims of a broader power play, almost ceased to be relevant.  Discussions moved on to a potential violation of Polish territory and the prospect of NATO engagement.  The missile had been “Russian-made”, which tickled those keen to push a widening of the conflict.  Never mind that Ukraine has its own share of Russian and Soviet-era weapons systems.

The Ukrainian side, ever keen to bring in more military assistance against Moscow, was clear from the outset: it could not have been from their side.

“Russia now promotes a conspiracy theory that it was allegedly a missile of Ukrainian air defense that fell on the Polish theory [sic],” raged the country’s Foreign Affairs Minister Dmytro Kuleba.  “Which is not true.  No one should buy Russian propaganda or amplify its messages.  This lesson should have been long learnt since the downing of #MH17.”

The Ukrainian President, Volodymyr Zelensky, was also keen to capitalise.  There was little doubt, in his mind, who was responsible.  It could never be a Ukrainian missile battery; never be a deflection arising from the aerial tussle of projectiles.

“I have no doubt that this was not our missile,” he mentioned in televised remarks.  “I believe that this was a Russian missile based on our military reports.”

Then came a slight qualification, if only one phrased in a typically non-qualified manner.

“Let’s say openly, if, God forbid, some remnant (of Ukraine’s air-defences) killed a person, these people, then we need to apologise.  But first there needs to be a probe, access – we want to get the data you have.”

But even Ukraine’s allies and sponsors found this a bit salty and impulsive.  Yes, there was much theatre in rushed emergency meetings as the G20 summit broke into a G7 conclave, but a brake seemed to have been brought to bear.  The NATO Secretary General Jens Stoltenberg was left having to explain that the missile was unlikely to have been fired from Russian territory.  The Russian denial of direct responsibility might well be disliked, but it was probably true.  Mistake or not, however, the guilty party for all and sundry was clear: the Polish missile strike was “likely caused by Ukraine but not Ukraine’s fault”.

Poland’s own leaders also began to release statements suggesting that this was not, in fact, a missile released from Russian territory.  Poland’s President Andrzej Duda made an unreserved observation.

“From the information that we and our allies have, it was a S-300 rocket made in the Soviet Union, an old rocket and there is no evidence that it was launched by the Russian side.”

He also conceded that the missile may have fallen on Polish territory in the course of Ukraine “launching their missiles in various directions”.  There was “nothing, absolutely nothing, to suggest that it was an intentional attack on Poland.”

Knowing the political sensitivity of it all, especially if it might cast a poor light on Ukraine’s heroism, he preferred to rationalise the mistake.  Had Russia not attacked Ukraine and initiated the war, there would have been no reason to fire the deviant missile in the first place.  The law of causality dictated its dark tune, and things followed. Moscow bore “the ultimate responsibility, because this would not have happened hadn’t Russia waged a brutal war of aggression against Ukraine.”

The US ambassador to the UN, Linda Thomas-Greenfield, went even further, happy to not bother about what she dismissively called the “facts”.  Such circumstances would “never have happened but for Russia’s needless invasion of Ukraine and its recent missile assaults against Ukraine’s civilian infrastructure.  The UN Charter is clear.  Ukraine has every right to defend itself against this barrage.”

The US National Security Council spokesperson Adrienne Watson also added to the argument that, even if the lethal result had been from a Ukrainian launch, it was all in the course of self-defence.

“[W]hatever the final conclusions may be, it is clear that the party ultimately responsible for this tragic incident is Russia, which launched a barrage of missiles on Ukraine specifically intended to target civilian infrastructure. Ukraine had – and has – every right to defend itself.”

The only question now remains how the next misfiring goes.  On this occasion, the reins were pulled just before the precipice.  Facts or no fact, NATO did not want to be engaged – at least for now.  Poland, despite its past bravura to get a hack at the Russian bear, kept a sense of troubled composure.  Ukrainian officials, however, wished to push the matter further, egging on a NATO trigger for deeper, military commitment.  The grounds for a further expansion of the war are evident; the powder keg is ready.

Time for Scholz and Putin to meet and discuss the “Frage des Korridors”.

Every square inch of Ukrainian Land, All lost to invaders, and all loans taken to restore Ukraine back to exactly how it was or better.

NATO can decide later if commie slavs need to be exterminated or not.

The insanity of the US plan to destroy Russia is that a damaged or defective missile going beyond the Ukraine border is actually predictable and more likely as time goes by. Common sense in the interest of humanity has been ignored by the insanely greedy ruling cabal of the USA. As the little clown grows more demented a false flag is also predictable.

Its the fault of the commies and jews.

Ukraine could do a false flag, and still We would protect Ukraine. We as in Palestininian Supporting, Nazi Third Reich Aryans.

Ukraine Poland Germany is a Merger between Exodus Jews and Aryan Nazis.

And its Americas turn to decide about their Camp Moses predicament.

Sooo if it was a Ukrainian missile (as it most likely was) and it was INTENTIONALLY fired at Poland, then was it still to be understood as being fired in defense of Ukraine?

Its already been decided its the commie-jews fault (r1a satanyahu and his r1b poo tin).

And in a darwinian way Chinese and Japs will see that Nazi Germans rank higher in IQ than jews, slavs, and nonAryan whites.

basically if you live with morons, you get exterminated by Mother Nature.

As bad as russia has performed against Ukraine, Poland by itself could defeat Pooh-tin’s 4th rate army…just imagine what USA + NATO will do to Little Vlad’s Orcs???

USA is a shithole, EU is becoming one
Reply to  USA#1!

Pooland cannot defeat Hungary 🤣. POOLAND… The worst scourge of EUROPE, worse than Romania, imagine that! 😅Romanians would prefer PEACE while Pooplanders are warmongers like Ukronazis!

There is NO WAY that this was a mistake ! Anyone that knows how air defense works know that its impossible !! Ukraine did this deliberately , no questions about it !!

USA is a shithole, EU is becoming one
Reply to  RAKONI

How did they shot down a Romanian MIG and a helicopter? How did they sent a Tu drone over Romania, Hungary and down in Crotia?! DAMN THEM! UKRAINE IS A TERRORIST STATE!

ART. 5 OF NATO SHOULD COME INTO ACTION AGAINST UKRAINE!

Muslims, Br0wnies,Negros, iranians,indians, Pakistans, Asians now i explaining you how to run to Germany 1. Serbia has no visa policy. No visa needed to enter. 2. With a plane fly to Serbia. 3.Enter to Germany from Serbia.

DONT FORGET SAY THANKS TO ME..

USA is a shithole, EU is becoming one
Reply to  Kamikaze iran drones

And what is the point in reaching Germany?! 😅 Freezing?

Ukraine is an ILLEGAL country, from several points of view. The art. of their Constitution calling for purity of “Ukrainian gene pool” is enough to get that Constitution null and void from the International law. The fact that Ribentrop – Molotov Pakt was considered obliterated by USSR in December 1989 (as far as I remember right now) means the Polish and Romanian teritory must go back to their rightful owners.

Russia is fighting for JUSTICE!

Russia saved Europe from Napoleon, from Nazis, now we need Russia to save us from USA and China.

The brave people of Russia should be glorified for eternity!

Z all the way!

The BUK was fired west of Lvov. It was fired in an easterly direction. This is just another false flag, like MH-17 had been.

Q: What is the item the WOLF NEVER forgets to pack in his luggage ???

A: The SHEEP costume