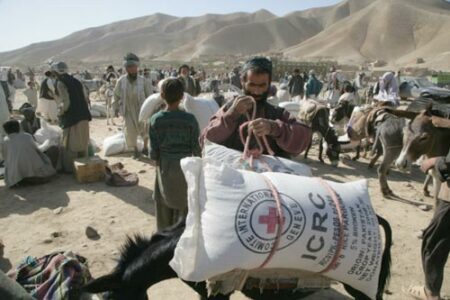 The Taliban and Pakistan, both viewed warily by the West and others in the international community, appear to be benefitting from mounting concerns about the humanitarian and security situation in Afghanistan.

The European Union, in a move that could put the United States in an awkward position, is close to reopening its mission in the Afghan capital and offering member states to use it as an operational base for their own diplomats.

The move would enhance European engagement of the Taliban but stop short of diplomatically recognizing the group as Afghanistan’s new rulers. The Taliban government has yet to win recognition from anyone in the international community.

The EU, its member states, and the United States had moved their diplomatic missions to the Qatari capital of Doha in August as they evacuated Kabul in the wake of the Taliban takeover of the city.

European officials said a reopening of the EU mission was necessary to manage a €1 billion emergency humanitarian aid package.

The United Nations’ World Food Program (WFP) and its Food and Agriculture Organization (FAO) said this week that some 19 million Afghans, or 45 per cent of the population, were experiencing “high levels of food insecurity.” That number is expected to jump to 22.8 million between November and March unless immediate action is taken, according to a report that was just released by the two agencies.

Senior United Nations officials, including Secretary-General Antonio Guterres, said earlier that one million children were at risk of starvation and death. They said Afghanistan’s poverty rate had soared and basic public services were on the verge of collapse. The crisis was worsened by the fact that hundreds of thousands of people had been made homeless as a result of recent fighting in the country.

A reopening of the EU mission in Kabul would effectively align Europe with US allies Qatar and Turkey, Pakistan, a troublesome friend, and America’s rivals, China and Russia that all favour some degree of engagement with the Taliban and in most cases a lifting of US sanctions that have blocked the group’s access to government deposits and assets abroad.

Chinese Foreign Minister, in his first meeting with the Taliban since the US withdrawal on Tuesday in Doha, called for the lifting of the sanctions, and pledged to help the group to “rebuild the country.” China has repeatedly said it was willing to work with the Taliban but has so far refrained from taking concrete steps in that direction.

The reopening of the EU mission serves the Taliban’s purpose not only as a breach in the group’s difficulty in garnering international acceptance but also because it would extend doubts about the United States’ ‘over the horizon’ counterterrorism strategy to the humanitarian and diplomatic realm.

The withdrawal from Afghanistan deprived the United States and its NATO allies of many of their on-the-ground intelligence and information-collection assets. It also means that US drones and aircraft when operating counterterrorism missions will have to fly long distances from ‘over the horizon’ facilities such as a US airbase in Qatar or naval vessels in Indo-Pacific waters.

One beneficiary of cracks in the international barrier erected around the Taliban may be Pakistan that has long been criticised for its alleged support of the Taliban.

Pakistan is like to earn brownie points for reportedly giving the Taliban intelligence and technical support in its fight against the Islamic State’s South Asian affiliate, Islamic State-Khorasan. Much of the international community is concerned about the Islamic State but has been unwilling to engage with the Taliban to counter the jihadist group.

The Islamic State has since August launched scores of attacks on Taliban targets although its three most devastating bombings struck Kabul airport in August during the US evacuation and more recently two Shiite mosques in Kunduz and Kandahar. In doing so, the Islamic State has raised doubts about the ability of the Taliban to stabilise Afghanistan.

Pakistan would likely use a successful Taliban offensive against the jihadist group to push the need for others to also engage with the Taliban.

Pakistan and some other proponents of engagement partly pin their hopes for Taliban moderation on the fact that the group is increasingly populated by a generation that came of age during the US-led occupation but has yet to make its mark.

“Routinely portrayed as archaic and extreme by critics and opponents, the new generation of Taliban are in fact a product of their times: more open to the prospect of gradual social change than their forebears yet politically more militant; English-speaking but mistrustful of the West; well-read yet wary of free expression; keen to help their country move forward but defined by its past,” said Afghan journalist Fazelminallah Qazizai.

Mr. Qazizai could well be correct. If he is, the Taliban have so far been unwilling to communicate unequivocally what their 2.0 means. Pledges on women’s rights, including secondary and tertiary education, have yet to be fulfilled.

The Taliban botched an opportunity to inspire confidence when the leader of the notorious Haqqani network, acting Afghan interior minister Sirajuddin Haqqani, recently convened family members of Taliban suicide bombers to celebrate the actions of their loved ones.

Rather than apologising to the victims, Mr. Haqqani, who has a US$10 million bounty on his head because of his close ties to Al-Qaeda, told the gathering in Kabul’s Intercontinental Hotel that was twice targeted by the group that the bombers’ “sacrifices are for religion, for the country and for Islam.” He said the Taliban would not have been able to fight the United States without the support of suicide bombers.

Mr. Haqqani may well have been catering to the Taliban’s rank and file in a bid to prevent those who may object to gradual social change from defecting to the Islamic State.

If so, Mr. Haqqani was also communicating that the Taliban may for now be in a Catch-22 as they walk a fine line between maintaining some semblance of unity within their ranks and garnering the minimal international confidence needed to address Afghanistan’s huge humanitarian and security problems.

Most importantly would be immediate Iranian, Russian & Chinese engagement.

The eu is a fkn joke. They are not even a democracy or respect basic human rights. Throughout europe people are being targeted and exterminated, as civilians, for opposing disgusting degenerates like merkel & macron and the turd from london.