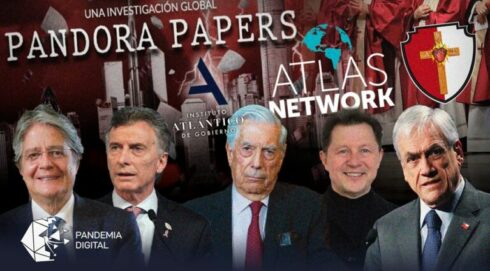 In 1971, Uruguayan political scientist and author Eduardo Galeano read the pulse of Latin American reality well with his lapidary phrase: “The world is divided above all between the unworthy and the indignant, and everyone knows which side they want to or can be on”. This he wrote in his book, The Open Veins of Latin America, which I leaf through today, 50 years later.

The masterpiece of one of the region’s most influential journalists has never been as relevant as it is today. Just a few days ago, 2.9 terabytes of information leaked by the International Consortium of Investigative Journalists (ICIJ) brought to light the offshore business dealings of 35 world leaders, including 14 Latin American presidents and ex presidents. Welcome to the Pandora Papers.

Latin America is the region of open veins, as Galeano (1940-2015) put it. Today, the global scandal which is a political tsunami for the region’s elites, reaffirms the Uruguayan’s theory. No other place in the world is as represented as Latin America in the biggest leak of data concerning so-called tax havens.

Of the 14 leaders immersed in the scandal, three are current presidents: Sebastián Piñera of Chile, Guillermo Lasso of Ecuador and Luis Abinader of the Dominican Republic. They maintain or have had financial offshore accounts in locations outside the legislation of their homelands.

“In a region marked by inequality, these documents confirm the gap that exists between the normal, law-abiding citizens and those who have access to tax havens and use them for their own private purposes”, explained Ewald Scharfenberg, Venezuelan journalist and member of the ICIJ member. A huge part of the political elite is involved in these practices, which is why the establishment will never take actions against this “shadow economy”, he added.

This observation is not new. Galeano warned of it five decades ago when he wrote that “the right-wing is ‘right’ when it identifies itself with tranquility and order: it is the order, indeed, of the daily humiliation of the majorities, but order at last. It is the tranquility that injustice stays unjust and those who are hungry, remain in hunger”.

In early August of this year, for example, the two most prominent figures of the Pandora Papers in Latin America – Sebastián Piñera of Chile and Guillermo Lasso of Ecuador – spoke out in favor of the abolitioning all tax havens, arguing that they are often used for illegal schemes, dubious business dealings or tax evasion.

Tax havens must disappear to make international financial transactions more transparent, they both assured the press. Defenders of those who use the tax shelters claim them to be legal, but if they are, the larger question that screams out is: “ought these offshore accounts be legal?”

Today, the leaders were left speechless and “surprised” by the ICIJ’s revelation. Piñera, one of the richest people in Chile, denied having violated any law.

According to the documents, the politician’s family is the largest shareholder in the controversial Dominga construction project in the north of the country. According to the leak, his children and wife manage the family’s assets through the tax haven of the US Virgin Islands.

In a statement, the billionaire took on the role of the delusional and emphasized that he was neither involved nor informed about the transactions in question. All this happens while Chile still demands justice for the police brutality with which his administration attacked the anti-government protests of 2019 in response to an economic crisis made much worse two years into the global pandemic.

The story repeats itself in Ecuador, where President Lasso immediately underlined his innocence on Twitter by saying that he did not own real estate in tax havens but that his extensive fortune is the result of his work at Banco de Guayaquil, of which he is the largest shareholder.

What came to light about Latin America was “no surprise to the citizens of the continent”, said Deputy Director of the Science and Politics Foundation (SWP) in Berlin, Günther Maihold. “The region’s political elites have always sought their financial opportunities abroad and not in their countries,” he explained.

“Latin America’s underdevelopment comes from the development of others, which continues to feed it. Impotent because of its role of international servitude, moribund since its birth, the system has feet of clay. It postulates itself as destiny and would like to confuse itself with eternity”.

Privatization is a neoliberal and imperialist plan. Health can’t be privatized because it is a fundamental human right, nor can education, water, electricity and other public services. They can’t be surrendered to private capital that denies the people from their rights.

Well, the good news is that the leadership in the US A is blameless and beyond reproach. Maybe the $21 trillion unaccounted for in the US Pentagon budget is just a few arithmetic mistakes.