ZeroHedge: The always ‘fair and balanced’ New York Times’ Nicholas Kristof (author of such ‘real news’ as “Donald Trump: Kremlin Employee of the Month?”, “What Did Trump Know, and When Did He Know It?” and “Donald Trump: The Russian Poodle”) has outdone himself with this week’s ‘opinion’ piece, asking “We’re just a month into the Trump presidency, and already so many are wondering: How can we end it?” 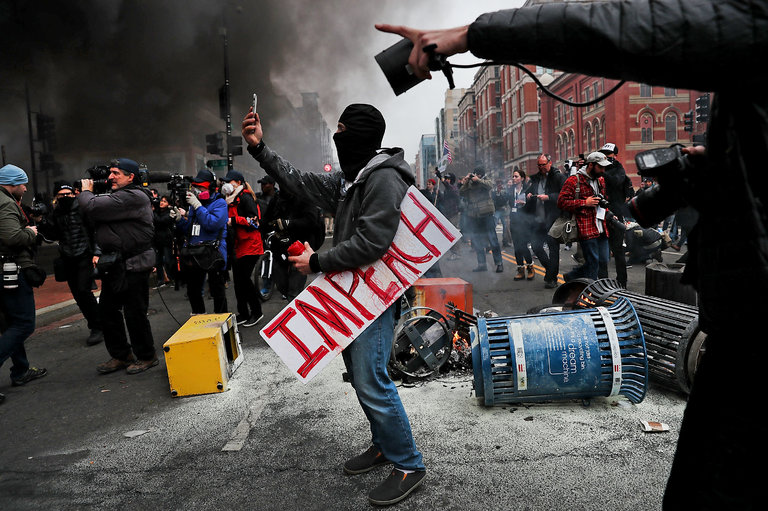 The article by the New York Times:

The always ‘fair and balanced’ New York Times’ Nicholas Kristof (author of such ‘real news’ as “Donald Trump: Kremlin Employee of the Month?”, “What Did Trump Know, and When Did He Know It?” and “Donald Trump: The Russian Poodle”) has outdone himself with this week’s ‘opinion’ piece, asking “We’re just a month into the Trump presidency, and already so many are wondering: How can we end it?”

While thousands turn out to Trump’s rallies, and several polls suggest the America that voted for Trump is still supportive of Trump and his actions, Kristoff points out that one poll from Public Policy Polling found that as many Americans — 46 percent — favor impeachment of President Trump as oppose it. Ladbrokes, the betting website, offers even odds that Trump will resign or leave office through impeachment before his term ends.

Sky Bet, another site, is taking wagers on whether Trump will be out of office by July.

There have been more than 1,000 references to “Watergate” in the news media in the last week, according to the Nexis archival site, with even some conservatives calling for Trump’s resignation or warning that he could be pushed out. Dan Rather, the former CBS News anchor who covered Watergate, says that Trump’s Russia scandal isn’t now at the level of Watergate but could become at least as big.

Maybe things will settle down. But what is striking about Trump is not just the dysfunction of his administration but also the — vigorously denied — allegations that Trump’s team may have cooperated with Vladimir Putin to steal the election. What’s also different is the broad concern that Trump is both: A) unfit for office, and B) dangerously unstable. One pro-American leader in a foreign country called me up the other day and skipped the preliminaries, starting with: “What the [expletive] is wrong with your country?”

So let’s investigate: Is there any way out?

Trump still has significant political support, so the obstacles are gargantuan. But the cleanest and quickest way to remove a president involves Section 4 of the 25th Amendment and has never been attempted. It provides that the cabinet can, by a simple majority vote, strip the president of his powers and immediately hand power to the vice president. The catch is that the ousted president can object, and in that case Congress must approve the ouster by a two-thirds vote in each chamber, or the president regains office.

The 25th Amendment route is to be used when a president is “unable” to carry out his duties. I asked Laurence Tribe, the Harvard professor of constitutional law, whether that could mean not just physical incapacity, but also mental instability. Or, say, the taint of having secretly colluded with Russia to steal an election?

Tribe said that he believed Section 4 could be used in such a situation.

“In the unlikely event that Pence and a majority of Trump’s bizarre cabinet were to grow the spine needed to do the right thing with the process set up by that provision, we would surely be in a situation where a very large majority of the public, including a very substantial percentage of Trump’s supporters, would back if not insist upon such a move,” Tribe said.

“In that circumstance, I can’t imagine Trump and his lawyers succeeding in getting the federal courts to interfere.”The better known route is impeachment. But for now it’s hard to imagine a majority of the House voting to impeach, and even less conceivable that two-thirds of the Senate would vote to convict so that Trump would be removed. Moreover, impeachment and trial in the Senate would drag on for months, paralyzing America and leaving Trump in office with his finger on the nuclear trigger.

My take is that unless things get much worse, removal may be a liberal fantasy. Progressives thought that Trump would never win the nomination or the election. He survived the “Access Hollywood” tape and countless crises that pundits thought would doom him, so it’s not clear why Republicans would desert him now that he’s president.

Some people believe that the 2018 midterm elections will be so catastrophic for the G.O.P. that everyone will be ready to get rid of him. I’m skeptical. In the Senate, the map is disastrous for Democrats in 2018: The Republicans will be defending only eight Senate seats, while Democrats will in effect be defending 25.

So while Democrats can gnash their teeth, it’ll be up to Republicans to decide whether to force Trump out. And that won’t happen unless they see him as ruining their party as well as the nation.

“The only incentive for Republicans to act — with or without the cabinet — is the same incentive Republicans had in 1974 to insist on Nixon’s resignation,” Larry Sabato of the University of Virginia told me. “The incentive is survival.”

Trump does have one weakness, and it’s parallel to Nixon’s. Republicans in Congress were willing to oust Nixon partly because they vastly preferred his vice president, Gerald Ford — just as congressional Republicans prefer Mike Pence today.

If I were betting, I’d say we’re stuck with Trump for four years. But as Sabato says: “Lots of things about Donald Trump’s election and early presidency have been shocking. Why should it stop now?”

And what does it say about a presidency that, just one month into it, we’re already discussing whether it can be ended early?

NY T should be banned from media.

According to Wikipedia, the NY times is run and owned by Jew after Jew. I posted the Wikipedia article below. https://en.wikipedia.org/wiki/Arthur_Ochs_Sulzberger_Jr.

Al Qaeda should have flown one of their hijacked planes back in 2001 into the New York Times building.